The myth of SXSW continues to mislead, but it’s nothing to cry about 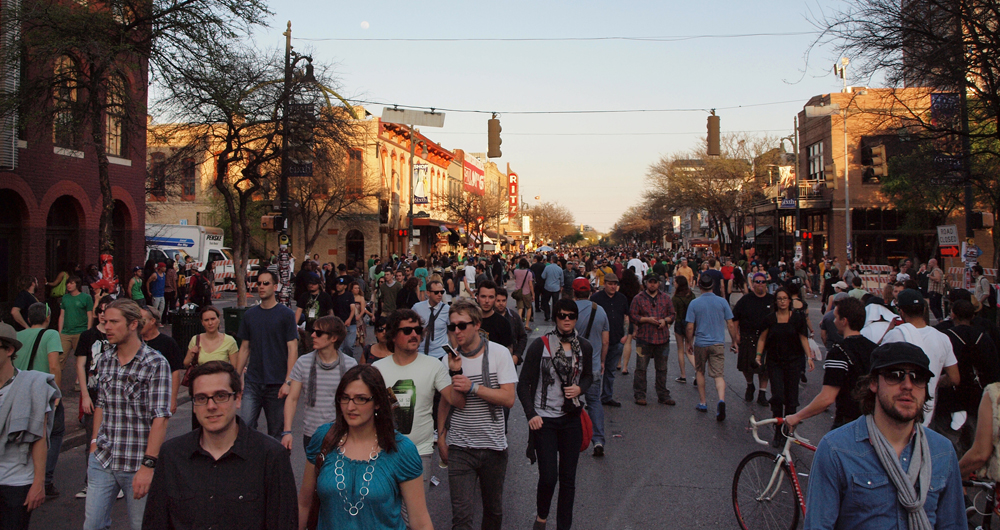 You might experience some fun dispatches from musicians, complaints from fans, conjecture on whether the festival’s original appeal has been lost, straight up unfiltered hatred, or even catch wind of plans to invade the festival with an armed march (I knew I could count on you, Alex Jones). Trying to pin down South By Southwest as one simple thing is running a fool’s errand these days, and it’s hard to take a jaded musician’s pat dismissal of the fest’s cultural significance when this year includes panels with exclusive interviews (via Skype) with Edward Snowden and Julian Assange (whose current cultural/political significance far outweighs any band, and I mean ANY band, who are playing this year). SXSW is now a ballooning, unwieldly parade of technology, film, music, and overpriced pizza, and there’s not a single reason to be upset about that. Here’s why.

Let’s start by addressing the festival’s biggest selling point for bands all across the world, drawing them into the heart of Texas like a super-powered magnet that attracts slightly smelly haven’t-been-washed-in-a-week-t-shirts: The myth of SXSW for up-and-coming bands is that they could be discovered there. One showcase, the right people in the crowd, just the right stage moves, and suddenly you’re signing a Capital Records contract in the back of a limo. The reality is, this is a fantasy so outdated, I’m suddenly doubting if anyone still entertains it anymore as I write these words. Not only are record labels not tossing around lucrative recording contracts anymore, the simple fact is, if you are rolling into Austin, TX without the music-blog-heavies already singing your praises, chances are that will remain the same as you exit the city five days later. Do you have any idea how delighted I was when I saw the Google results for this search phrase? Even considering a band’s more modest expectations that a performance at SXSW could garner some small level of buzz rolling for their operation, buzz that couldn’t be achieved from wherever their band originates (Brooklyn, I’d snarkily assume), seems short-sighted and not unlike the mentality of someone without a disposable income who sinks serious money into the lottery on a weekly basis. For instance, let’s keep an eye on this list and see how it fares with a year’s worth of perspective added to it (Yes, I am aware of the 11 Golden Tickets awarded to our best and brightest. Full credit awarded to SXSW for these success stories, still these odds are not compelling in a way that’s comensurate with the level of enthusiasm the bands summon when traveling great distances to play the festival).

But guess what? This isn’t a crime, it’s just a misconception. Even if the SXSW organizers actively pushed this myth to keep their festival relevant (and this article will refrain from speculating on that), it’s not where the blame should lie. Do the math, aspiring bands! The sheer, mathematical odds are taking a piss all over your merch table. We don’t need your blog-post written in the back of the van as your cruise through Louisiana about how the festival has lost its original spirit. Festivals aren’t bands, they aren’t truth-speakers, they aren’t poets. They are money-making opportunities for entrepreneurs who enjoy culture. Pissed off that your band has to compete with a cryptocurrency for the SXSW spotlight this year? Don’t create online screeds about it, rather, as Terence McKenna said, “Create your own roadshow!”

What’s infinitely more compelling and productive than rebelling against a circus so out-of-touch with tasteful promotional stunts that homeless people were recently turned into wifi hotspots there? Carving out your own, new way to showcase the beautiful ideas of the world that you find compelling. With any luck, your little corner of local awesomeness will grow, expand, and become a beacon of intrigue for those interested in the same kind of creativity as you. And if, for whatever reason, the popularity of your festival one day begins to bloat, and the original purpose is lost, and financial gain takes center stage in your yearly planning of it, don’t shed a tear. There’s always someone with purer intentions right behind you, and the cycle will keep on renewing.

There are some things that are sacred in this world. Festivals aren’t one of those things. And so I say, “Let them eat expensive pizza.” Have a great SXSW this year, everyone.

Enter to win tickets to see Trio Da Kali at The Villa Victoria Center of the Arts (Newton, MA) on April 10th. END_OF_DOCUMENT_TOKEN_TO_BE_REPLACED

END_OF_DOCUMENT_TOKEN_TO_BE_REPLACED

Enter to win tickets to Rhye at The Paradise on February 28th. END_OF_DOCUMENT_TOKEN_TO_BE_REPLACED

Her new album has been pushed back, but we have Kimbra’s new single for you. END_OF_DOCUMENT_TOKEN_TO_BE_REPLACED

The folk duo returns with a new record this week. END_OF_DOCUMENT_TOKEN_TO_BE_REPLACED

Now that we’re done looking back at 2017, let’s look ahead at 2018. END_OF_DOCUMENT_TOKEN_TO_BE_REPLACED

Our first Song of the Week for 2018. END_OF_DOCUMENT_TOKEN_TO_BE_REPLACED

In a year when so many things were off, the music was right on. END_OF_DOCUMENT_TOKEN_TO_BE_REPLACED