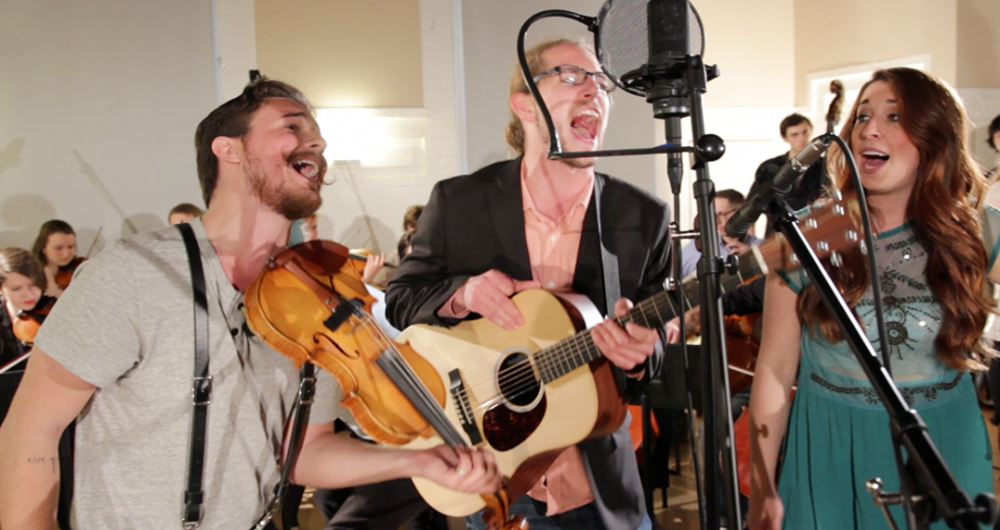 It all started about a year ago, when recent Berklee College of Music graduate, Evan Chapman, was approached by a singer-songwriter friend who was in dire need of an alternative platform to showcase his original music. Having experienced the plight of attaining legitimate exposure that most up-and-coming artists face, Chapman devised a plan to create a platform for the crop of promising musicians that surrounded him in the Berklee community. Within weeks, The Loft Sessions – a stellar YouTube series that pairs emerging musicians with a massive world-class backing orchestra, choir and video production team – was born.

“I remember thinking about how my composition and film-scoring experience could be put to work with my friend’s musical skills, and then the light bulb went off,” says Chapman. “I would take an artist’s songs, rearrange and score them according to a specific aesthetic I envisioned, then collaborate with the artist and crew of instrumentalists to create a large scale performance that we could film and share.”

Since the Loft Sessions’ 2013 inception, Chapman, who writes, produces and arranges each musical number for each session, has worked with over 200 instrumentalists, singers, arrangers, writers, video editors and sound and lighting engineers, creating and mastering professionally produced videos for the wildly talented artists he has encountered throughout Boston.

“At that time I wanted to kind of branch out of the mechanical film scoring I was doing in school and challenge myself by writing music for my own practice, while also tapping into smaller communities, not only at Berklee, but throughout the Boston area and including a range of genres like hip hop, funk, bluegrass, and spoken word poetry,” says Chapman.

There’s something to say about a grassroots music organization that within the short span of a year can garner the attention of and beckon collaboration with some of the city’s most esteemed instrumentalists, including the Boston Symphony Orchestra and Boston Pops. Chapman’s eye for innovation throughout the creation of the Loft Sessions has proven indispensable to further fostering the talents and musical endeavors that are abundant in Boston.

Each season, Chapman carefully curates four artists for which he and his incredible team orchestrate compositions that will then be packaged into video form. In keeping with the spirit of spotlighting fresh music, The Loft Sessions just released its newest video featuring the Boston-based collective, Damn Tall Buildings – a powerhouse bluegrass ensemble.  The video, which features an original track by the group titled “The Ballad of Nigel Williams,” shares the band’s invigorated sound, but with a contemporary twist that incorporates a classical string and choral backing arrangement.

Soon to follow, the Loft Sessions will release the last installment of its Spring collection of videos on June 2nd, with a performance by the ambient folk group, The Western Den.

“Chris West and Deni Hlavinka of Western Den are incredible songwriters,” says Chapman. “Their sound is very reminiscent of the Civil Wars and they have a trumpet player as well as a cellist and violin player. They have an incredible sound and the song that I’m featuring is called ‘Desert Proud’ — it almost has a Middle Eastern vibe. The arrangement I put together is very Radioheadesque.”

To stay up to date with The Loft Sessions’ newest videos, check out their Youtube channel.

A decade of Wreck The Halls. END_OF_DOCUMENT_TOKEN_TO_BE_REPLACED

Leah Wellbaum from Slothrust brought her trusty six-string to Studio B and turned in the first RadioBDC Session of 2017. Check out her three songs and her chat with Julie Kramer, recorded live on February 28, 2017. END_OF_DOCUMENT_TOKEN_TO_BE_REPLACED

Mike McColgan and Lenny Lashley of Street Dogs were in session on November 30, 2016 to play three songs and chat about their annual Wreck The Halls shows at Brighton Music Hall December 15-18. END_OF_DOCUMENT_TOKEN_TO_BE_REPLACED

Tegan and Sara stopped by for a chat before their House of Blues show on Halloween night. END_OF_DOCUMENT_TOKEN_TO_BE_REPLACED

The sultry boom of Ruby Rose Fox rounded out a summer of sessions in Studio B presented by FindMassMoney.com. Enjoy the videos and Ruby’s chat with Julie Kramer. END_OF_DOCUMENT_TOKEN_TO_BE_REPLACED

She is Dee Dee from the Dum Dum Girls no longer. She is now Kristin Kontrol, and she played a short set for us in Studio B on June 17, 2016. END_OF_DOCUMENT_TOKEN_TO_BE_REPLACED

We were back at the AT&T Store on Boylston St. on June 7, 2016 for another exclusive live session, this time with a favorite of mine, Day Wave. END_OF_DOCUMENT_TOKEN_TO_BE_REPLACED