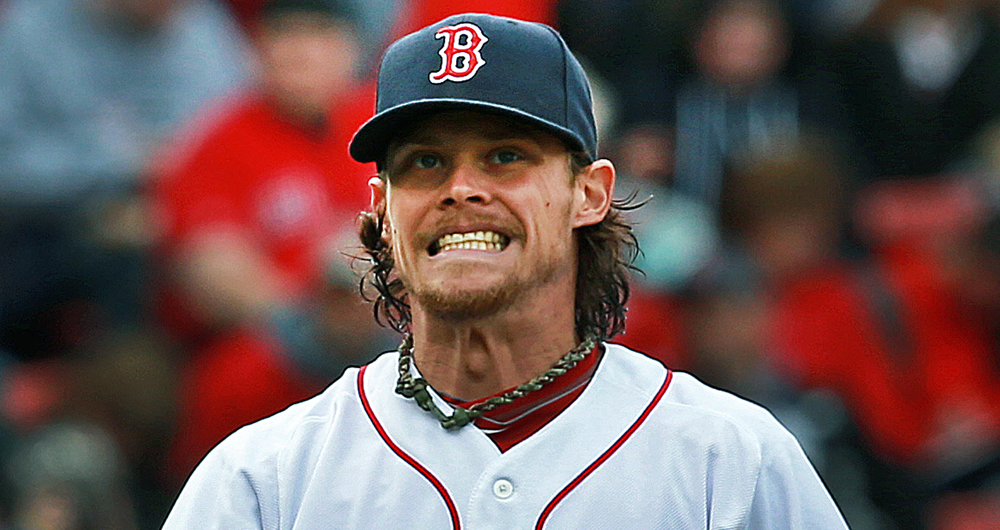 The Knuckles return just in time for the NFL’s preseason to be up and running. Did you know that there are more knuckleheads per capita in the NFL than in any of the other three major American pro sports leagues combined? Of course you did – you’re all experts in identifying knuckleheads! Not to be outdone though, it is still baseball season and around these parts, the Red Sox have provided an ample amount of Knuckle nominees over the course of the year. Why should this week be any different? So without further ado, let’s get into this week’s winners!

The Bengals have done a nice job dragging themselves out of the morass of the NFL’s laughingstock swamp over the past several years, but they’ll be damned if they don’t allow you to forget how pathetic they once were.


The latest head-scratcher out of Cincy involves quarterback Andy Dalton, who on Monday signed a mega contract extension that, after cutting through all of the usual NFL contract nonsense, basically comes out to a two-year, $25 million deal that could escalate to a much higher figure thanks to workout bonuses and incentives based on performance. And here’s where the Bengals might seem be a little bit smarter than we may have thought. Dalton could earn himself some big extra dollars if he can lead the Bengals not only out of the wild card round but into the AFC Championship and the Super Bowl. The problem is, in three years in the league, he’s a tidy 0-3 in the playoffs. The Bengals win in the regular season, Dalton, 30-18 in his career, looks like the kind of QB who could do some damage then promptly craps all over the field when the lights go on.


The numbers bear it out. In those three straight postseason losses, Dalton has averaged just 239 passing yards per game (gross), completed just 57 percent of his pass attempts (grosser) and thrown for one measly touchdown against six interceptions (grossest). It’s fair to argue that he’s still young, having only been in the league for three years and therefore still dealing with some growing pains. But then, look at how much he’ll make on this new contract and compare it to 49ers QB Colin Kaepernick, who will make very similar money on a new deal he signed a couple months ago. Kaepernick has been in the league for the same amount of time as Dalton and has been to two NFC Championship games and one Super Bowl. So, yeah, the growing pains argument doesn’t really fly.


Anyway, back to the Bengals. Did they indeed play this right through tying so many incentives to Dalton’s winning some big games? They know better than anyone what a tough time he’s had doing that up to this point, so maybe owner Mike Brown insisted on all those performance-based bonuses knowing he’d probably never have to pay them out. Such a cynical move would be completely in character for Brown, who is notorious for being one of the cheapest owners in the NFL.


Or maybe we’re giving Brown and the Bengals too much credit. This is a team that’s employed the same head coach, Marvin Lewis, for 11, going on 12 years now, despite his never winning a single playoff game either. Dalton may be 0-3 when it matters most but Lewis is worse, yet seems to have a lifetime deal to lead the Bengals straight to the middle. So on second thought, the Bengals aren’t smarter or craftier than we may have given them credit for being. They’re just the same old, knucklehead Cincinnati Bungles.

Humility comes in short supply in many NFL cities which is why it’s OK if you’ve never heard of Philadelphia Eagles defensive back Cary Williams. He’s an idiot who can’t keep his mouth shut, a couple of qualities that are not exactly unique when it comes to pro football players. There would be a better chance that he’d stand out if he weren’t a loud mouth buffoon.


Williams is best known around these parts for picking a fight with then rookie wide receiver Aaron Dobson when the Patriots traveled to Philly for joint practices with the Eagles last summer. In advance of the two teams meeting up again for another round of combined workouts in Foxborough next week, Williams shot his mouth off by bringing up Spygate, noting that the Pats haven’t won a title since the scandal hit back in 2007 and calling them “cheaters” while complaining about having to take part in practices against them again.


Never mind that Williams didn’t even enter the league until 2009. Or that he played four seasons for Baltimore, arguably the most morally bankrupt organization in the NFL, as well as an arch rival of the Pats, for four years before joining the Eagles. Clearly, he’s qualified to speak on a topic as old, played out and over as Spygate.


Williams can take comfort in knowing that he has a raft of knucklehead minions who lined up to parrot his ridiculous commentary in its aftermath, with one Eagles writer noting that he’s “correct in being suspicious in everything that goes on” in Foxborough while another actually tried to make the argument that the Pats and Bill Belichick’s punishment for Spygate, fines totaling $750,000 and the loss of their 2008 first round pick, represented a “pretty light sentence” and that the NFL “probably should have taken a Super Bowl win or two away from them.” Those are actual things that actual people who have actual platforms at which to write about football actually published.


There’s no reason to try to talk sense into any of these morons, whether it’s Williams or the clowns who wrote their drivel at the Lehigh Valley Morning Call and Fansided’s Inside the Iggles, respectively. Longtime, highly decorated NFL coaches like Jimmy Johnson and Bill Cowher noting how silly the reaction and subsequent uproar in regard to Spygate isn’t enough. It’s far easier to point and blame and call names and dredge up the past than it is to exercise any real critcial thinking skills, both for Williams the Morning Call and Fansided writers. Hopefully Williams won’t mind sharing his Silver Knuckle with those two dummies. And by the same token, hopefully he’ll keep running his mouth next week when he and the Eagles arrive in Foxborough.

It goes without saying that Clay Buchholz is a disaster, a pitcher who doesn’t trust himself and therefore looks on the mound as though he’d rather be anywhere else. But until last week’s near complete dismantling of the Red Sox entire starting rotation by general manager Ben Cherington, it was almost OK to react to Buchholz’s maddening, mysterious performances with no more than a shrug. The Sox had bulldogs like Jon Lester and John Lackey in front of him to pick up the slack. Even Jake Peavy, in his diminished, snake bitten state, inspired more confidence than Buchholz seeing as how you always knew you were going to get a tough, ballsy effort out of him. With so much talent and heart surrounding Buchholz, it was slightly easier to digest all of his shortcomings, both mental and physical, as mind-boggling and frustrating as they were/are.


Now that those three guys are gone and Buchholz is the last man standing, that’s simply not possible anymore. He’s the man now, the near 30-year old veteran with six-plus major league seasons under his belt and stretches of complete dominance on his resume. So of course, with the lights shining on him at their brightest, on Sunday Night Baseball against the Yankees on his home field, Buchholz spit up all over himself. Again.


Buchholz allowed seven runs on eight hits with five walks while throwing 114 pitches in five innings. He blew two three run leads. In his previous start against Toronto, he also blew a three run lead and allowed seven runs in five innings. He has allowed 18 earned runs over 16 innings in his last three starts. His ERA is 6.20, the worst in the American League for pitchers who’ve logged enough innings to qualify for the ERA title. He is a trash fire of a pitcher.


Not sure about anyone else, but I thought Buchholz turned a major corner in the World Series last year. After his incredible 9-0 start, he missed three and a half months with a shoulder/neck strain suffered from falling asleep funny while holding his infant daughter. When he finally came back, it was clear that his demons were shouting at him, as he wasn’t the same and seemed, both in his words and body language, to be afraid to be pitching. So when Game 4 of the Series came around and he was the scheduled starter and so much talk before the game focused on how little he had in terms of stuff and what a risk it would be to run him out there given that the Sox were on the road and trailing 2-1 in the series and how could anyone so weak mentally handle all of it, he then stunned everyone by pitching extremely well despite the diminished stuff and velocity, getting through four innings without allowing an earned run and keeping the Sox in the game long enough for them to eventually win it. The fact that he was able to accomplish that on such a big stage and with all the questions surrounding him, I thought, would carry over and finally toughen him up.


He’s weaker than ever. He was so bad for the season’s first two months that the team had to make up an injury just to be able to stash him on the shelf for a few weeks to try getting him sorted out. It seemed to work too. He was very good in his first four starts off the DL, one of which was a three-hit shutout of the Astros in which he had 12 strikeouts and zero walks while looking completely like his early-2013 self.


And that was followed up with what we have now, another swan dive off the Cliffs of Insanity. No one can pinpoint what’s wrong with him. He says he’s healthy and no one else in the organization has breathed a word suggesting otherwise. So the only conclusion one can realistically come to when it comes to Buchholz is that he’s just a king sized headcase. He’s had so many chances to put all of his inconsistencies and bizarre setbacks behind him throughout his career yet he not only never, ever takes advantage of any of them, he seems to just dig himself deeper in the well. And now that Lester and Lackey are gone, there’s nowhere left for him to hide.


So take heart, Sox fans. Your new No. 1 starter is also one of the biggest knuckleheads in all of baseball. Hope that gets gets you nice and pumped for 2015. 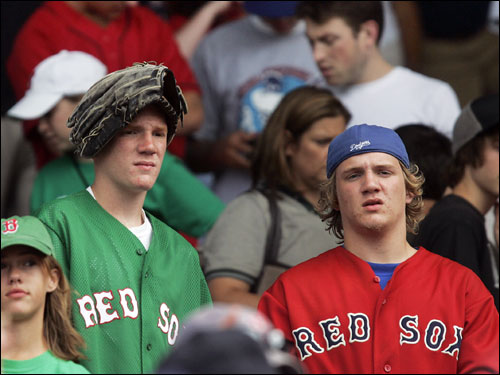