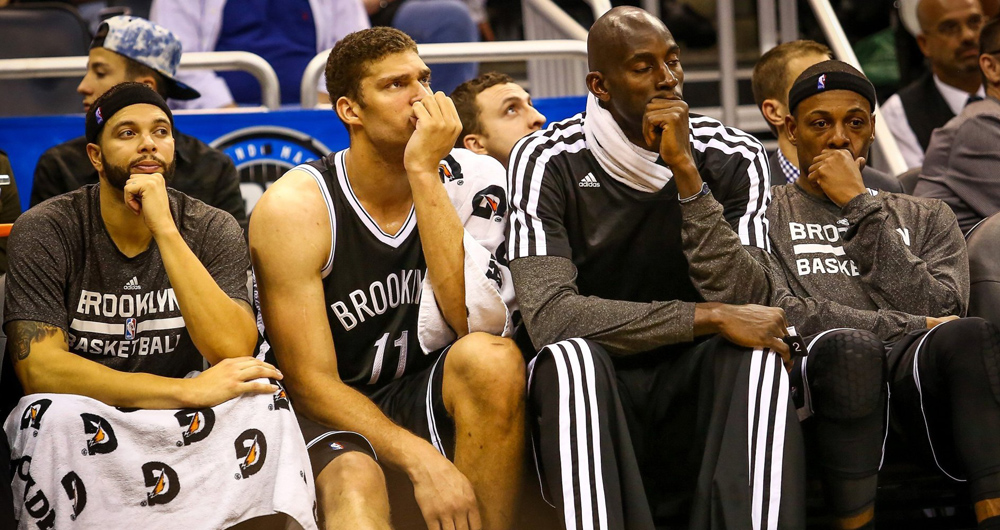 On the heels of Monday night’s Home Run Derby and last night’s endless, “Martian Chronicles”-length retirement party for Derek Jeter masquerading as the MLB All-Star Game, we could have had a lot of fun at baseball’s expense in this week’s Knuckle Awards. But that fruit hangs a little bit too low, so in an effort to challenge ourselves, and you, our faithful followers/award show flunkies, we decided to examine another prevalent, ongoing occurrence in the world of sports this past week, NBA free agency . Thus, without further ado, we present to you an all NBA edition of the Knuckles. Ball don’t lie.

Tough luck for the Nets to find their way into this week’s list of winners so soon after making a tremendous, anti-Knuckle move in telling Jason Kidd to go bleep himself on the heels of his ridiculous power play strategy. And while the team hasn’t done anything wrong since then, last weekend’s exodus of Paul Pierce from one of the five boroughs to Washington, brought back joyful memories of last summer, when the Celtics made them look like the biggest knuckleheads in all the land.


Sad as it was to see Pierce and Kevin Garnett go (didn’t forget Jason Terry, it wasn’t sad to see him go in the slightest), the deal was so lopsided in Boston’s favor, it had to amount at least to grand larceny in some backward states. To recap, Brooklyn gave up a first round pick this year (turned into James Young, jury obviously still out), a first-round pick in 2016, the right to swap first round picks in 2017 and a first round pick in 2018. Mercy.

So, for one year of Pierce, half a year of Terry (traded to Sacramento last winter) and now that Pierce is gone, potentially just one year of KG on his last legs and a grand total of $190 million spent on payroll and the league’s luxury tax, the Nets gave the Celts that massive haul of future assets and won one lousy playoff series in doing so. They may be seeing the financial error of their ways now, hence the decision to let Pierce walk for a measly two-year, $11 million deal. But retroactively, they still win a Knuckle.

Morey, the Houston Rockets’ GM, owns the NBA distinction of being “the smartest guy in the room,” which can be a blessing (see Oakland A’s GM Billy Beane) or a curse (see the Tampa Bay Rays insufferable manager Joe Maddon). With this in mind, it makes sense that Morey calculated his way into completely clearing the decks in Houston in an attempt to land a third max contract free agent to play with James Harden and Dwight Howard, two previous additions that lent a lot of weight to Morey’s reputation. But this past week, he saw his plan blow up in his face, proving that even the smartest guy in the room can be a knucklehead.


Morey traded important rotation players Omer Asik and Jeremy Lin as well as a future first rounder for pretty much nothing and let young, burgeoning star Chandler Parsons, who only averaged 16.6 points, 5.5 boards and four assists at age 25 last year, slip into restricted free agency a year early in order to create even more cap room despite only having to pay him about $965,000 for 2014-2015. In the aftermath of clearing all that space, Morey and the Rockets were spurned by everyone they looked at, from LeBron to Carmelo to Chris Bosh, who they were thought to have wrapped up right after LeBron announced his return to Cleveland, only to have Bosh take one more year and many more dollars to return to Miami and be the man on a suddenly not that awesome team.


Even Mike Miller, a well past his prime shooter who is at best a 15-20 minute per game bench guy at this point, spurned the Rockets, taking less money to join LeBron, his former Heat teammate, with the Cavs. All the Rockets were left with was Trevor Ariza, a pretty good small forward (and a defensive upgrade over Parsons) who Morey once traded away and is not surprisingly coming off the best season of his career in a contract year for Washington. Parsons, by the way, wound up signing a huge offer sheet with Dallas which Morey didn’t match so as to maintain the same financial flexibility that did nothing for him this summer down the road, losing a top player he could have kept for less than $1 million in the process. Seems like the smartest guy in the room out thought himself, proving that even smart guys can be knuckleheads.

Herein lies the dilemma that is Carmelo, the best player in the NBA to never accomplish anything of true import. If you like incredibly talented scorers who take 30 shots a night for bad teams, Carmelo’s your man. But this summer, his first foray into free agency, he had a chance to change that narrative once and for all. All he had to do was take a little less money and join a potential powerhouse in Chicago or two fellow stars in Houston. Instead, he took more and remained with the Knicks, the team furthest away from contending of all his suitors. Ugh.


Look, it’s tough to begrudge anyone for wanting to get paid the most he or she possibly can. Nothing wrong with maximizing your earning potential, especially when you work in an industry in which money basically grows on trees and careers don’t have the longest lifespan. And Carmelo decided to follow that blueprint. So now, a player who has been out of the first round of the playoffs twice in 11 years, once past the second round, and who sports a horrid as it looks 23-43 career postseason record, will be incredibly lucky to improve upon those numbers at least for the next year.


The Knicks could have somewhere near $20 million in salary cap space at this time next summer and the fact that Carmelo is still in his prime and Phil Jackson, one of the greatest winners in the history of the sport, is running the basketball operation, makes the Knicks a fairly attractive destination for another star to come and play. Maybe if he winds up a free agent, Kevin Love will sign with the Knicks next summer. Maybe no one will go to New York next summer either, the Knicks will still have cap room in 2016 and Kevin Durant, who will then be a free agent, will become a Knick. Or maybe none of these things will happen, the Knicks will remain the same also-ran they’ve been for years and years and years and Carmelo will go down in history as the next coming of Dominique Wilkins, an all-time, elite offensive player who never even approached winning anything.


But hey, at least he’s making the most money he possibly can.