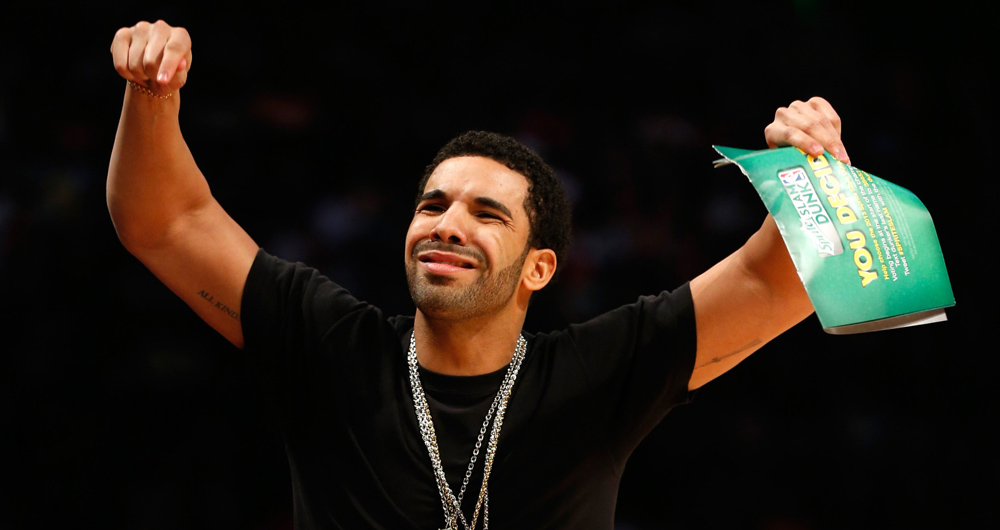 Welcome back my friends, to the show that never ends. The Knuckles lives on, this week tackling our nation’s biggest tackle football league, the NBA, it’s absurd rules and the knucklehead teams who break them and, as will more than likely be the case every week until the leaves start turning, the local nine, your defending World Champion Boston Red Sox. The Sox may be playing better over the past few days, but being a knucklehead stops for no man, woman or baseball team.

The act of tampering, already a nebulous concept, will no longer merely consist of teams contacting players or their agents while still under contract to other teams. Now you can’t even get a chant going at a lousy concert without getting some team fined.


Such was the case for the Toronto Raptors, who for some reason, anointed serial, front-runner fan/knucklehead Drake, “global team ambassador” status back in 2013. So, when Drake, who loves to show up courtside, on the sidelines and/or in the locker room of whatever team in whatever sport is winning whatever big game is happening in a given week, implored the masses at a gig he played in Canada’s biggest city last week, to show soon-to-be free agent Kevin Durant, who was in attendance and also, by the way, is under contract with the Oklahoma City Thunder for two more seasons, “what would happen if he came to play in Toronto,” and the crowd subsequently went bonkers, the NBA police took notice and slapped a $25,000 parking ticket on the Raptors front windshield.


This was the same amount of money Knicks president Phil Jackson got docked when he publicly professed interest in Derek Fisher becoming New York’s next head coach while Fisher was still an active player this past spring. Forget for a moment that this is utterly hilarious – Drake and Phil getting popped for the same thing at the same price earned a spit take from yours truly upon reading about it – and look at what actually qualifies as a violation of the league’s anti-tampering rules these days, and the NBA has a nice, shiny Knuckle to hang over its fireplace.


Of course, the Raptors, apparently unaware of Drake’s previous tampering exploits, can share the honor here not only for adding Drake to the corporate masthead as their global ambassador but actually doing it in an official capacity. Wonder how they’ll feel about that move when he’s sitting two seats down from the scorer’s table when the Thunder and playing the Cavs in the 2015 Finals and chasing Durant back to the huddle for a high-five at every whistle. Maybe they’ll just look at it as another attempt at recruitment for the summer of ’16. They better hope the NBA doesn’t see it the same way. Unless of course they take the league’s advice and end their silly relationship with Drake tout suite.

Like millions of others, I love football, but the NFL could give a god damn about either that or about any of us. Barely a day goes by without some story breaking in regard to some absurd decision or decree that will not only screw over fans and players alike but diminish the actual on-field product or, in simpler terms, the reason we actually watch and love the games as much as we do. Think trying to expand the league to London or believing that extending the regular season to 18 games is a good move or doing everything under the sun to legislate pass defense out of the game or some other dumb idea that serves zero purpose but to make all of the league’s billionaire owners and their multi-millionaire employee/commissioner richer than they already are.


There, now that I’ve gotten that off my chest, I’ll tell you why the NFL is once again a contestant for a Knuckle this week (it probably should just have at least one of the three medals named after it at this point). Dallas Cowboys cornerback Orlando Scandrick earned himself a four-game suspension on Monday night for testing positive for MDMA or Molly, as all you crazy kids call it. It seems Scandrick dosed up while on vacation in Mexico earlier this summer and subsequently failed a test.


Fine. No one to blame here but Scandrick. Or is there? You see, just testing positive for Molly would have been a violation of the league substance abuse policy, which for first-time offenders like Scandrick would have merely resulted in a slap on the wrist. What doomed Scandrick was that the Molly he took was laced with amphetamines, which is on the list of banned substances under the league’s PED policy. And that’s what got him, just as if he’d taken steroids or anything else of the like.


So here’s where once again, league commissioner Roger Goodell can step right up and claim his prize. You see, the reason why the league’s drug policy is so archaic and subsequently gets guys banned from games for partying or failing to clear an Adderall prescription with the league, is because Goodell will not agree with the players association on neutral arbitration in regard to any substance abuse oriented suspensions. Goodell wants to be judge, jury and executioner on matters such as these and so Scandrick, and so many other players who are not even remotely trying to cheat the system, get the book thrown at them for trying to cheat the system. Agents and NFLPA reps have routinely pointed out the inherent unfairness of this as well as offer up potential solutions but unsurprisingly, Goodell the Ginger Hammer won’t budge.


We could take a detour here into how Scandrick will miss twice as many games for tripping out as Ray Rice will for beating up his then fiance on camera in an effort to further pile on Goodell and the labyrinth of nonsense contained in the NFL bylaws over which he presides. But that’s an entire column unto itself (and it was done, brilliantly, by Grantland’s Louisa Thomas). So instead, let’s give Goodell and the NFL a round of applause for screwing Scandrick and the Cowboys (a team so perpetually screwed already, it can’t possibly take any more) when they didn’t have to. Don’t feel bad if you miss participating in the ovation though. They’ll all probably be back next week and the week after that and the week after that and so on, ad infinitum. 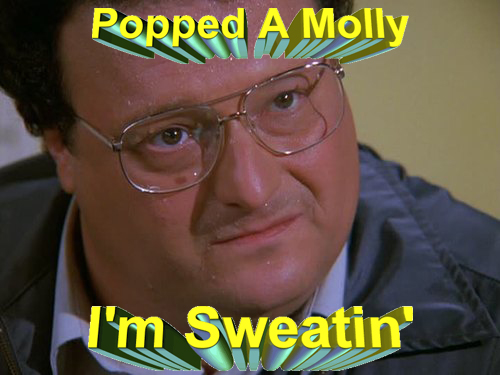 The Sox have won four of five and just completed their first winning road trip of more than three games all season. What better time to award them with another Golden Knuckle?


At this point, seeing as how the season is over and has been for weeks, these honors represent something of a lifetime achievement award for the dismal 2014 season. And their recent solid play doesn’t absolve them of being a bunch of knuckleheads in the slightest.


This week, we’ll look at some of the head scratching decisions that have contributed to the trainwreck of this year. Both on the field and elsewhere, it seems the Sox can’t get through a single series without at least one “what the hell is going on???” moment. There are a few going on simultaneously right now, from the team’s insistence on keeping newly acquired Yoenis Cespedes in left field instead of testing him and his flame thrower of an arm in right, to the fact that players like Jackie Bradley Jr. and Will Middlebrooks aren’t playing every day during this stretch of games that mean absolutely nothing while Daniel Nava, a player who has no real future in Boston, is out there day in and day out after getting buried in favor of a retread like Grady Sizemore earlier in the year.


First, Cespedes. Sox manager John Farrell noted before Tuesday’s win in Cincinnati that keeping Cespedes in left for the remainder of the year makes more sense than testing him in right because he’s more comfortable playing there. If the Sox were in a pennant race or actually playing for anything other than to put the fans out of their collective misery, this excuse might make some sense. But they aren’t. They’re playing out the string, The remainder of the schedule means nothing. This is prime time to try things out, experiment with different possibilities, see what certain guys can do at certain spots. If Cespedes is indeed a candidate for the right field job, wouldn’t the team be better served to see if he can handle it now, during real live game action instead of waiting until spring training next year to find out? Senseless.


Then there’s Bradley, Middlebrooks and the rest of the automatic outs (that’s a band name – The Automatic Outs). Watching these two at the plate is so, so painful. Bradley just ended an 0-for-35 against the Reds on Wednesday with a single but he hasn’t hit all year save for a little less than month in the middle of the summer and we are subsequently in danger of losing the chance to see his otherworldly defense on a daily basis. And Middlebrooks, who hasn’t hit in two years and looks just as helpless after his most recent stint on the DL and in the minors as ever, is nearly as bad, He’s 4-for-29 with one RBI since rejoining the Sox on August 1 and would appear to be a prime trade candidate if there were a market for lousy defensive third basemen who can’t hit. As has been said in this space before, at least he’s marrying well.


But even though Bradley and Middlebrooks each has no chance with a bat in his hands, both should be out there every day for the same reason Cespedes should be getting an audition in right. Why not? What are the Sox playing for? Isn’t now, when there is no pressure whatsoever, a perfect time to get these guys as many at-bats as possible to see if they can solve their problems at the big league level? If Bradley could just hit .240, he’d be a hugely valuable everyday player thanks to that defense. So let him figure it out now when his difficulties can’t hurt. It’s one thing to play Brock Holt every day now that he’s proven to be a piece to the Sox future puzzle. But running Nava out there and subsequently forcing Holt into center in place of Bradley makes zero sense.


As for Middlebrooks, the Sox are well stocked on the left side of the infield going forward and given his inability to gain any traction in Boston, an off-season parting of the ways seems like a great idea. And while you could make the argument that sending him out there to go 0-for-4 every day hurts any trade value he may still have, the counter is that he won’t be able to rebuild any of that value by sitting on the bench. As brutal as he may be to watch, he’s gotta play.


But don’t be surprised if he doesn’t. For the most part, the Sox have been allergic to making sense throughout the year. The trade deadline deals of two weeks ago represented the only real smart thinking on the part of the organization all season. The rest of the time, they’ve mostly just been knuckleheads. 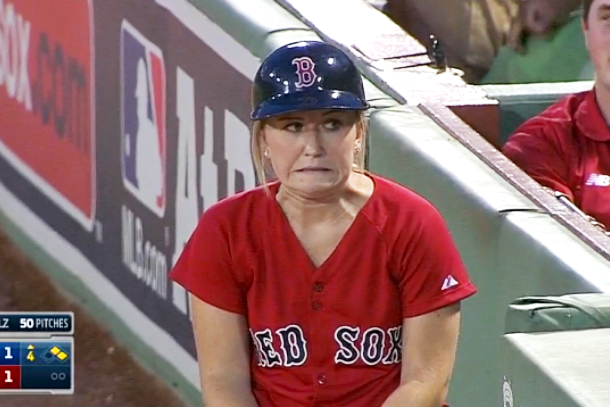