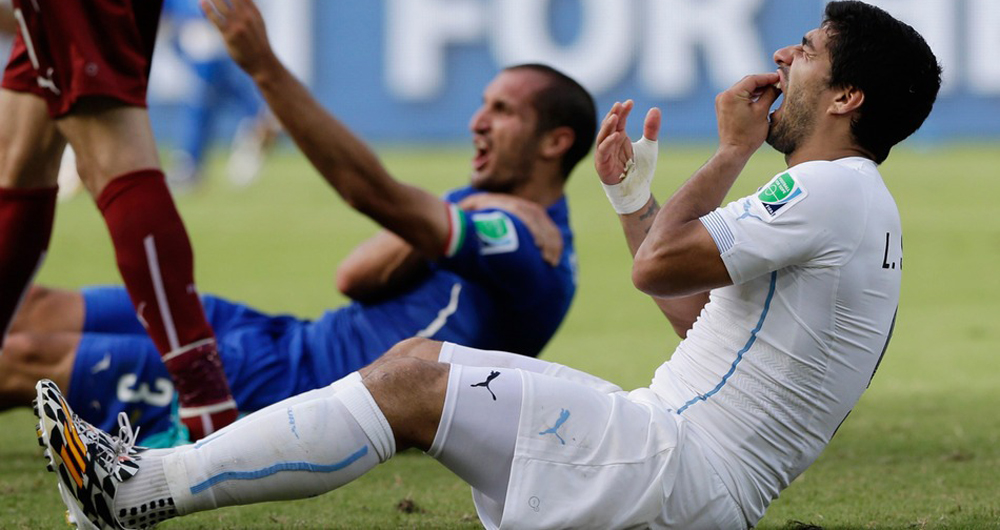 We’ve made history here at The Knuckles.

Thanks to the actions of renowned soccer supervillain Luis Suarez during yesterday’s World Cup match between Uruguay and Italy, we have an example of knuckleheadedness so egregious, so outrageous and so over the top that it rendered all other nominees and potential winners of a Knuckle Award this past week obsolete. Suarez took the act of being a knucklehead to a new, heretofore unforeseen level, the likes of which we may never see again (at least until the next time he takes the field). So with that, let’s not waste any more time. Here’s the first ever Knuckle Awards clean sweep.

Uruguay, needing a win to advance out of Group D and into the knockout stage, faced Italy, which also needed a win in order to stave off elimination from group play for the second straight World Cup. The game, played in Natal, was a must-win for both countries.

Instead, what should have been a contest fraught with suspense and tension over which country would move on turned into something of a freakshow thanks to the exploits of Suarez, the serial knucklehead.

In the 79th minute, Suarez sauntered up to Italian defender Giorgio Chiellini in the box on Italy’s half of the field, jostled with him for a brief second then proceeded to lean in and bite the Azzurri’s fullback right in the left shoulder. Chiellini, as I’d imagine anyone would were they to be bitten out of nowhere by a grown man, recoiled and Suarez, in keeping with everything there is to know about him, flung his head back as if he’d been shot, dove to the turf and writhed in pain while holding his jaw and mouth, as if Chiellini’s shoulder jumped out of its socket and smashed Suarez right in the mandibular molar.

Naturally, Suarez was not disciplined for his actions. Chiellini even showed the referees the teeth marks embedded in his skin, but Suarez still skated. And then as if the bite was just the rallying cry the rest of Uruguay’s roster needed, defender Diego Godin finished a well placed corner kick not even two minutes later for a 1-0 lead. The game would end in that score, the Uruguayans moving on and the Azzurri headed home.

Suarez, who plays club ball for Liverpool of the English Premier League, has something of a reputation in world soccer. You see, he’s a bit of… well, a jerk (hey, The Knuckles are a family award show). Yesterday wasn’t the first time he bit an opponent during a game. Nor was it the second. For Suarez, who must have some very fond, deep seeded memories of teething as a small child, this was his third biting incident. He was suspended for the first two, one of which happened while he was in the employ of Dutch club Ajax and the other with Liverpool. Let’s hope he’s forced to sit out at least Uruguay’s Round of 16 match, to be played Saturday against Colombia. 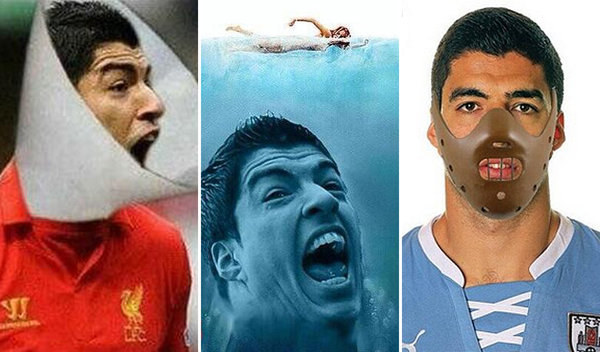 This would be a fine time to point out that earlier in his career, during his first season with Liverpool, Suarez also earned himself a suspension for an incident in which he was found to have hurled a racial epithet at Manchester United left fullback Patrick Evra during a game. Whatever he gets for biting Chiellini surely won’t equal the eight games he got for his despicable language toward Evra, but this particular event should give you some idea of what kind of person we’re dealing with in Suarez. It probably won’t surprise you to learn that the next time Liverpool and Manchester United met after Suarez returned from his ban, he refused to shake Evra’s hand during the traditional, pre-game handshake line. What a guy.

The most entertaining aspect of Suarez’s most recent knucklehead moment is how unsurprising it was worldwide. Bets were placed on him biting someone, anyone. Famous bite victims spoke out. Big time brands called him out on Twitter.

If ever an additional testament to soccer being the world’s game was necessary, this absurd yet wholly predictable occurrence did the trick. 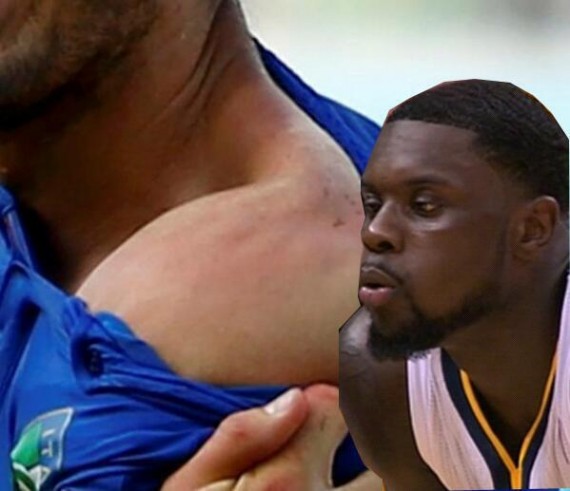 Perhaps Suarez, who stayed true to form after the win over Italy by not only denying any wrongdoing but suggesting that Chiellini was more deserving of blame, is a necessity. Sports are always more fun when there’s a villain or at least someone a majority of fans can rally around disliking and subsequently root against together. And in that regard, it helps immensely that despite being thoroughly detestable, Suarez is a superstar, one of the best players in the world. His antics and disgusting behavior detract from his greatness to be sure. But if Suarez were just another footballer, yesterday’s bite would have been met without much more than a general ho-hum, some anguished hand wringing on the part of the soccer cognoscenti and then forgotten.

Stand tall. But keep your incisors to yourself.