Man Tries to Sell $650 Worth of Scalped Tickets to ‘The Interview,’ Demands Refund When Sony Offers it Online

Plenty of skeptics wondered if the international crisis surrounding Sony’s new film “The Interview” might end up being a publicity boon for an otherwise mediocre film. One Cincinnati man certainly saw the business potential surrounding the film’s release, buying $650 worth of tickets with the intention of scalping them, only to be foiled when Sony released the film a day early online.

According to WCPO Cincinnati, Jason Best, the man behind the scheme, said his attempts to negotiate a refund from the Esquire Theater in Clifton, Ohio or movietickets.com, the site that handles the Esquire Theater’s online sales, were rebuffed.

“I saw all the hype about ‘The Interview’ on the 23rd and thought, ‘hey, folks are selling these tickets in other cities and it seems like that’s the thing to do right now so why not give it a shot so see how it goes,'” said Best, adding that he planned to use one ticket for himself.

“I thought I’d get my money back because the theater’s website *very clearly* said the tickets were refundable,” Best wrote in an email to WCPO.

But, it turns out, the Esquire doesn’t offer refunds for “special events,” which is how they categorized the Christmas screening of “The Interview.” Best said the theater never made that clear when he bought the tickets, and that he should be entitled to a refund like any other customer. 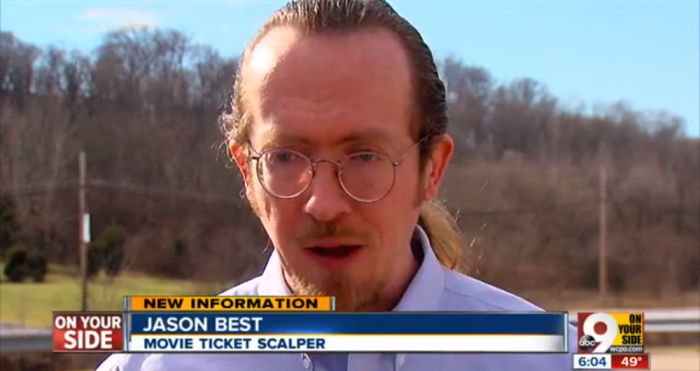 Playing Devil’s Advocate for a minute, if Best had only bought a single ticket, I think he’d have reasonable grounds to ask for a refund. The theater’s refund policy reads as follows:

Tickets can be refunded at the box office (in person) up to 30 minutes prior to showtime purchased. Service fees are non-refundable. No refunds/ticket exchanges for Special Events.

Considering that the theater never told him it was a special event, and that Sony unexpectedly offered the same movie for more than half the price online, any reasonable consumer could ask for a refund under that policy.

And even if Best buying 50 tickets with the intent of scalping them was in bad faith, you could imagine a similar scenario in which someone buys 50 tickets for a birthday party screening, only to ask for a refund when realizing they could save money by streaming it on a projector at home.

In any case, the company’s president Gary Goldman said that the theater did not consider Best a customer, but rather a businessman attempting to recoup losses. Perhaps hoping to avoid a protracted legal battle, Goldman said they would donate the $650 to charity if Best would drop his refund request. His response?

Best said he can’t to do it, claiming he’s not in a position to be able to donate the entire amount and would like a full refund. He said he would be willing to donate $100 to charity in the name of the theater.

Golden Globe and Emmy nominee Benjamin Wallfisch is the composer responsible for the score of the hit movie IT. I talked to Ben about his approach to scoring the new version of this iconic story and his thoughts on film and music overall. Some very insightful commentary; listen in. END_OF_DOCUMENT_TOKEN_TO_BE_REPLACED

Rupert Gregson-Williams is an award-winning film composer. He just so happened to compose the score for this summer’s big blockbuster Wonder Woman. We talked about his beginnings in film scoring, film scores that move and inspire him and, of course, Wonder Woman. END_OF_DOCUMENT_TOKEN_TO_BE_REPLACED

Jeff Rapsis is a New England-based composer and performer. Lately, he’s been creating live musical scores for silent film screenings. I talked to him about his process and a few of his upcoming performances at The Capitol Theatre in Arlington and the Somerville Theatre. You can keep track of where else Jeff is scoring silent films here. END_OF_DOCUMENT_TOKEN_TO_BE_REPLACED

Planning on seeing Rogue One: A Star Wars Story when it opens this weekend? I joined Adam 12 to give you an idea of what to expect. But don’t worry, I didn’t give anything away. END_OF_DOCUMENT_TOKEN_TO_BE_REPLACED

No, not from afar, from the comfort of her couch. From the actual awards themselves. That’s where Meredith Goldstein was for the Oscars. She shared all the juicy, first-hand details with me. END_OF_DOCUMENT_TOKEN_TO_BE_REPLACED

To celebrate the opening of ‘The Force Awakens,’ I had some very special guests in studio to start the Thursday, December 17 edition of The Brink. Listen. END_OF_DOCUMENT_TOKEN_TO_BE_REPLACED

Watching the new Star Wars trailer a million times gave us all sorts of feels. And one of those feels was nostalgia. END_OF_DOCUMENT_TOKEN_TO_BE_REPLACED

While many have called out Davis since a video of her refusing to issue a marriage license to Rowan County residents David Moore and David Ermold went viral in July, relationship columnist and gay activist Dan Savage went a step further on MSNBC Tuesday night, saying that “this is about someone hypocritcally looking to cash in”. He added: “And she is a hypocrite.” END_OF_DOCUMENT_TOKEN_TO_BE_REPLACED