The Bandwagoner: A World Series Preview That Uses Things Like Karma and ‘Parks And Rec’ In Lieu Of Stats 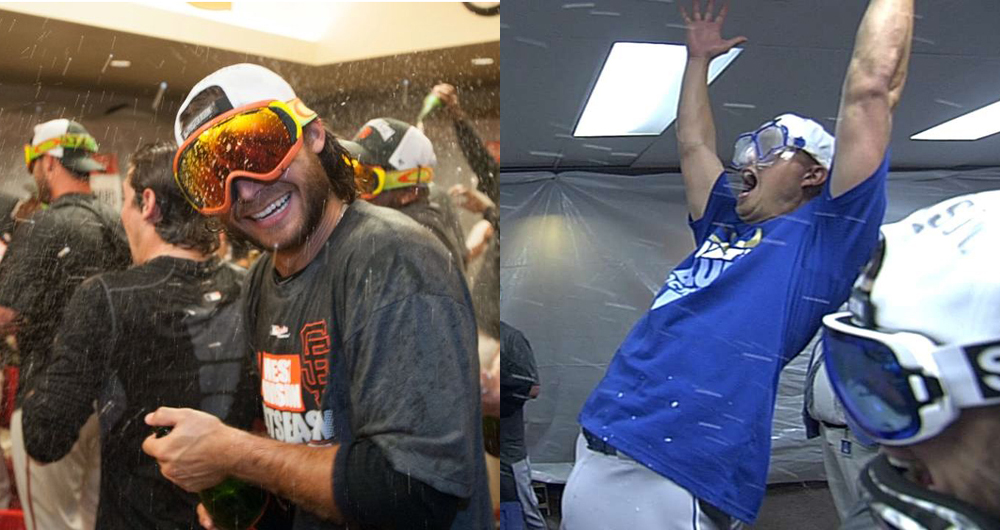 “Octoberfest, meet October’s Best” was the actual first headline of this column before I came to my senses in the middle of an apple cider bottle wasteland, complete with food crumbs and Christmas lights (somehow). Maybe I should tell my doctor that Rick Reilly is a recurring character in my nightmares.

Whatever. It’s time for the World Series*. This year, it’s a fight between the Kansas City Royals of the American League, and the San Francisco Giants of the National League.

*Beginning in 1903 as a best-of-nine matchup between the redundantly-named Boston Americans and the still-here Pittsburgh Pirates, the World Series is still the name for baseball’s final round of the playoffs, and still retains its charmingly xenophobic air of superiority.

The Royals, propelled by a mystical Parks and Rec GIF on Reddit baseball message boards, are going to try to bring home their first championship since 1985 against the Giants, who have won the Series in every even year going back to 2010. (That’s, uh, two. Still impressive.)

If you’re looking for the Giants to win, consider this: they have never lost a playoff series under manager* Bruce Bochy, which is incredible, because to this day I’m convinced that Bruce Bochy robbed childhood me of every single proxy-baseball joy in my youth.

*Unlike coaches in almost every other major sport, baseball managers have close to zero responsibility during the game. They make pitching changes, spit tobacco, get to wear stretchy pants every day, and scream at umpires. In short: they are living your dream, and you should idolize them.

(To explain that run-on sentence: I grew up in San Diego, where Mr. Bochy managed the San Diego Padres from 1995 to 2006. Despite making it to the Series once — and apparently winning National League Manager of the Year in 1996 — every game I attended with Bochy as a manager ended in horrible, sickening losses. I appreciate what he’s done in retrospect, but part of me still wants to shove my Ryan Klesko bobblehead in his admittedly handsome mug.)

The Giants also have, in my opinion, a stronger starting pitching rotation, championed by Madison Bumgarner and the resurgent Jake Peavy, who is replacing injured ace Matt Cain. They have Buster Posey, a catching wünderkind, the NL 2012 MVP, and winner of Major League Baseball’s “Best 1950s Throwback Name” five years running.

But the Royals, led by their incredible bullpen, are on a hot streak to end all hot streaks. It’s not just that GIF, either. They also have some serious karma on their side.

*A hot streak, or “on fire,” or “golden touch” etc. is a possibly apocryphal theory that success can be transferred from game to game, thus sparking a winning streak. And no, Kevin, just because you hit the last three shots in beer pong does not mean you can ‘get next.’ Goddamn it, Kevin.

Do y’all know Dan? He’s a swell guy. Dan (presumably) enjoys long walks on the beach, just as long as each individual grain of sand is “respecting the game” in any sport, at all times, and that the offshore seals refer to their managers by “Sir Shark” and “Madam Massive BP Oil Spill.”

I bring up the Boston Globe’s Dan Shaughnessy to remind you all of his pre-2004 propensity to mention a certain “Curse of the Bambino*.” Just a couple days ago, it was the 10th anniversary of the Dave Roberts Steal**, a goddamn national holiday, as far as I’m concerned.

*Supposedly, Babe Ruth’s trade from the Red Sox in 1918 prompted the Baseball Gods to “curse” the Red Sox, and never let them win a World Series again. (This is poor cause for a curse, right? I mean, baseball players — especially the Sox— were really racist, among other things that would necessitate divine intervention. I’d prefer to think the Baseball Gods heard about the Black Sox Scandal the following year, and made a mere accounting error regarding teams with “Sox” in the title.)

** Dave Roberts’ critical steal late in Game 4 of the ALCS against the New York Yankees, which helped them to win the series, and then the championship. Also known as that moment where your dad lied to you and said he was at.

See, before (and slightly after) the championship, Mr. Shaughnessy championed the curse as much as anyone has any right to champion anything. We were, according to him and several other respected baseball commentators, supposed to be utterly miserable.

Except, well, as a city, Boston was doing OK. Sure, 86 years of losing in one sport sucks. But the 21 years before 2004 were pretty OK. A bunch of Celtics championships, Pedro Martinez, the Bruins… well, whatever. But it’s not like Boston’s had nothing to look forward to after regular seasons.

Kansas City has had 21 years without any playoffs from any of their teams. Nobody was calling Curse, but it sure as hell sucked. The Royals’ farm system* was long regarded as their only shining spot.

*The colloquial name for Major League Baseball’s Minor League system, where players go from Single-A teams, and advance to Double-A and Triple-A, before the Major Leagues. Not to be confused with Kansas City’s equally excellent farms and incredible barbecue, though this is equally important to the Royals’ weight room officials.

With all that built-up karma, and with reports that San Francisco thinks it can just ban Lorde outright (though to be fair, that’s hilarious), BDCwire is picking the Royals to win in six games.

The Black and Gold continue their run tonight at TD Garden. END_OF_DOCUMENT_TOKEN_TO_BE_REPLACED

Who will make the Class of 2018? END_OF_DOCUMENT_TOKEN_TO_BE_REPLACED

It’s been awhile since we talked Black and Gold. END_OF_DOCUMENT_TOKEN_TO_BE_REPLACED

You’re going to wish you were in the Northern Alps. END_OF_DOCUMENT_TOKEN_TO_BE_REPLACED

END_OF_DOCUMENT_TOKEN_TO_BE_REPLACED

Bill might be “on to Tennessee,” but we’re not. END_OF_DOCUMENT_TOKEN_TO_BE_REPLACED