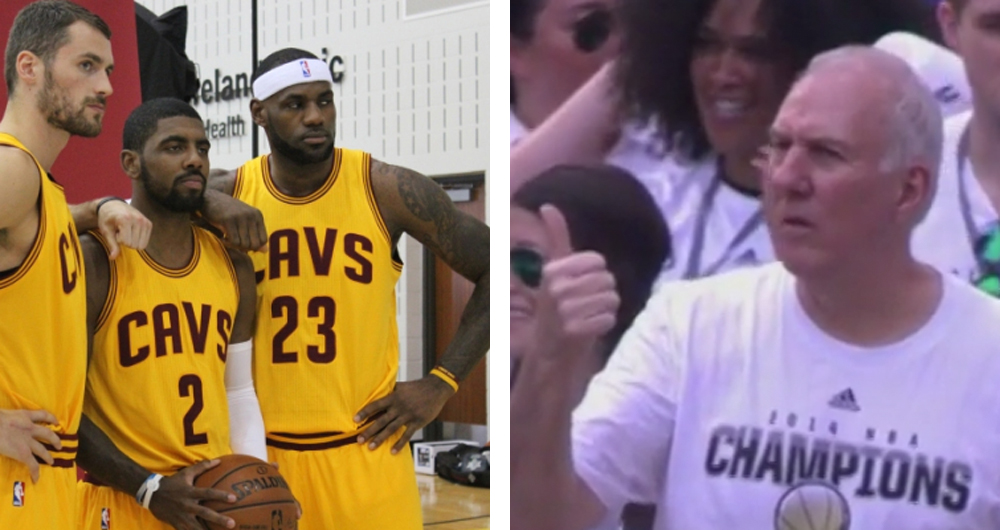 Have good things ever happened on Tuesdays? Seriously, this is unprecedented. God Bless Adam Silver*.

The NBA season begins tonight, as the reigning champions, the San Antonio Spurs, take on their division rivals Dallas Mavericks, and some of us are a little excited. We’re going to predict our division winners here, and check back in later this year with some revisions. Cheers.

** Divisions in the NBA are unwieldy, completely incorrect, and don’t make sense. But we’re rolling with them anyway, because they’re a great article format.

WHY: The Warriors, coming off a disappointing first-round exit against the Clippers, are deeper, stronger defensively, and now led by new head coach Steven Kerr — whose autographed basketball I received at a camp when I was 13 is still at my parent’s house, and in no way affected this ranking at all — and his new revamped offense that offers “less predictability.” There’s also Stephen Curry and Klay Thompson, who nail threes like my father nails granny free throws.

WHY NOT: Injuries, man. This is a risk for all teams, sure, but the Warriors are employing Australian supervillain Andrew Bogut as their center again, and while he’s extremely effective on the defensive end, he tends to get hurt in really bizarre ways. Also, the Clippers, according to ESPN, have two of the top five players in the league. So that’s an issue.

*The team previously owned by aforementioned racist Donald Sterling, but now owned by this guy.

WHY: Before you start hurling “KD Is Not Nice” apparel at my door, hear me out. I’m aware that the Oklahoma City Thunder are in this division (the NBA has an, uh, interesting concept of geography), and ended up winning their division last year. But Kevin Durant, last year’s MVP, scoring champion, and unfair video game avatar, is out for a considerable length of time.

Now, this is awesome, because Thunder point guard Russell Westbrook has been compared to Godzilla, which may be selling him short. He’s fantastic to watch, and one of the most terrifying players in the league when he’s feeling it. But I don’t think it’ll be enough to recover from losing Durant for such a long amount of time. Portland has a more balanced team and a fantastic home crowd.

Also, Damian “Fucking” Lillard is so clutch, I’m not sure if Damian from “The Omen” would get in his face.

WHY: Because they’re the Spurs, we doubt them every year, and they’ve belatedly earned top nods from several major sports outlets. The Spurs don’t seem like the team that will stoop lower than their expectations.

WHY NOT: Because last year’s championship run was beyond a storybook ending. It was a get-your-screenplay-out-of-my-face-it’s-much-too-unrealistic ending. After suffering a heartbreaking loss to Miami in the 2013 Finals — and being victimized by the greatest shot in NBA history — the Spurs came back and cleaned house. It’s not entirely inconceivable that they have a championship hangover to rival “The Hangover”.

WHY NOT: The rest. (And no big men beyond Anderson Varejao. And the possibly resurgent Bulls. And, uh, divine intervention?)

ANIMATION REPRESENTATION: When the headband comes off, the opponents come undone.

* I really, really shouldn’t have to have a footnote for this man.

** Now we’re talking! Kevin Love was the prize of 2014 free agency after LeBron went back to Cleveland, and just may be the perfect partner for King James on pick and rolls. He’s a tremendous rebounder, and a great shooter. His last name also rules.

WHY: It’s time for John Wall to let loose, that’s why. Last year’s push past the first round of the playoffs was the first one since 1979, and there’s reason to believe that the team will take a bigger step this season. Otto Porter, the somewhat-maligned third pick of the 2013 draft, has had a promising preseason, and shooting guard Bradley Beal, though out for quite a few games, worked extremely well with Wall last season.

WHY NOT: Because the ‘Zards have terrible luck, a terrible name (this is way better), and karma reeling from the Gilbert Arenas contract (note: the Orlando Magic are paying Arenas after amnestying* him).

* A team can amnesty a player’s contract, which basically means that the player still gets money, but it doesn’t count against the team’s salary cap.**

** The limit on how much teams can spend on players’ salaries in a season.

WHY: If their absolutely insane fan section doesn’t affect at least five games, you can throw this prediction back in my face. The Raptors are becoming an entertaining, high-flying, and legitimately dangerous force in the Atlantic. This is also the weakest division (by far), so they have that going for them.

WHY NOT: If Kevin Garnett revitalizes his career, demands a trade to Boston from Brooklyn, then convinces Kevin Love to leave Cleveland to form a “Kevin’s Korner” dynasty, Rajon Rondo develops a specialized unblockable half-court hook shot, and now I’m going to cry.

The Black and Gold continue their run tonight at TD Garden. END_OF_DOCUMENT_TOKEN_TO_BE_REPLACED

Who will make the Class of 2018? END_OF_DOCUMENT_TOKEN_TO_BE_REPLACED

It’s been awhile since we talked Black and Gold. END_OF_DOCUMENT_TOKEN_TO_BE_REPLACED

You’re going to wish you were in the Northern Alps. END_OF_DOCUMENT_TOKEN_TO_BE_REPLACED

END_OF_DOCUMENT_TOKEN_TO_BE_REPLACED

Bill might be “on to Tennessee,” but we’re not. END_OF_DOCUMENT_TOKEN_TO_BE_REPLACED