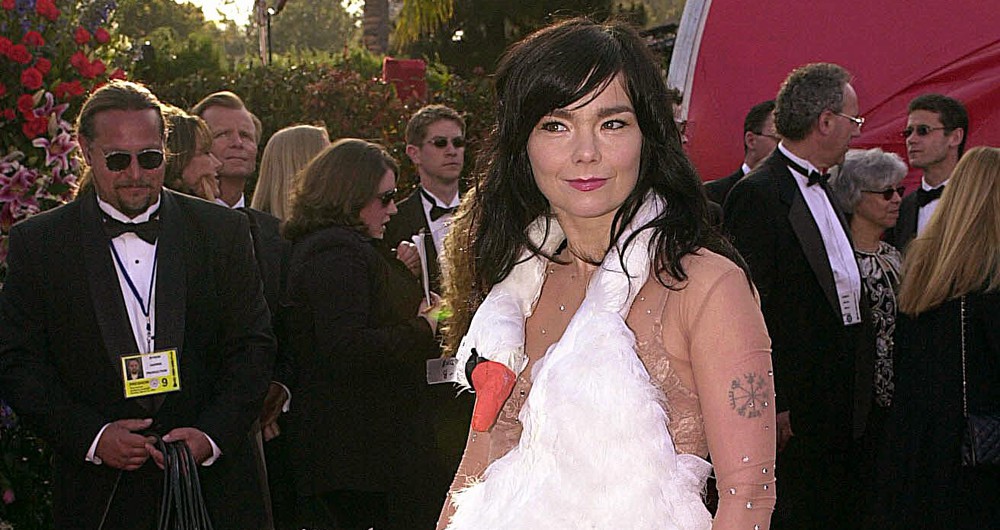 Let’s be real, the Oscars are not known for their stellar musical moments. In fact, it’s a triumph if you can get through all the “Best Original Song” performances without falling asleep.

This year, however, we’re a little more optimistic. For starters, Neil Patrick Harris is serving as host for the evening – an actor with actual song and dance chops. Secondly, did we mention that Tegan and Sara along with The Lonely Island are performing “Everything is Awesome”? The Academy Awards are suddenly looking up. But, before the awesomeness of 2015 erases the past from your mind, take a look back at the lesser musical moments in Oscars history:

Two words: SWAN DRESS. The song itself isn’t that bad, actually. It fits in line with Bjork’s style… but how can you pay attention to the music when that swan dress is going on? We love you, Bjork. Never change.

The Academy of Motion Picture Arts and Sciences must have really been struggling with what to do for this performance. Then, a moment of genius must have struck one of the show’s producers. “I’ve got a great idea, let’s interpret the movie ‘Crash’ through interpretive dance!” Now we have this awkward moment to treasure for all time.

3. Oscars 1997 – The History of Film Editing explained by… The Lord of the Dance?

In another “what were they smoking when they dreamed this up?” moment, the Oscars tried to be classy by honoring one of the most overlooked aspects of film, the editing. A classic, classy Oscars montage starts to roll– the usual. But THEN the Lord of the Dance himself, Michael Flatley, comes on stage to accompany the footage. What does this have to do with film editing? We have no idea.

Comedy legends Bob Hope and Lucille Ball rustled up a group of 19 actors to represent the up and coming young talent in Hollywood. It seemed like such a great idea! Until you watch Christian Slater, Corey Feldman and Ricki Lake among others sing and dance about how badly they want to win an Oscar some day. So cringeworthy. No wonder most of the actors involved in the number are unrecognizable today.

The same year that gave us the above number also gave us the weirdest Oscars performance of them all. Rob Lowe and Snow White’s musical number is just plain awful. The opening number of the 1989 awards finds the princess screeching along while attempting to entertain celebrities in the audience. Did we mention the glittery stars dancing in the background? It’s painfully awkward. To top it off, Rob Lowe (fresh off his sex-tape scandal) shows up to sing the worst duet ever. Yikes.

Enter to win tickets to see Trio Da Kali at The Villa Victoria Center of the Arts (Newton, MA) on April 10th. END_OF_DOCUMENT_TOKEN_TO_BE_REPLACED

END_OF_DOCUMENT_TOKEN_TO_BE_REPLACED

Enter to win tickets to Rhye at The Paradise on February 28th. END_OF_DOCUMENT_TOKEN_TO_BE_REPLACED

Her new album has been pushed back, but we have Kimbra’s new single for you. END_OF_DOCUMENT_TOKEN_TO_BE_REPLACED

The folk duo returns with a new record this week. END_OF_DOCUMENT_TOKEN_TO_BE_REPLACED

Now that we’re done looking back at 2017, let’s look ahead at 2018. END_OF_DOCUMENT_TOKEN_TO_BE_REPLACED

Our first Song of the Week for 2018. END_OF_DOCUMENT_TOKEN_TO_BE_REPLACED

In a year when so many things were off, the music was right on. END_OF_DOCUMENT_TOKEN_TO_BE_REPLACED