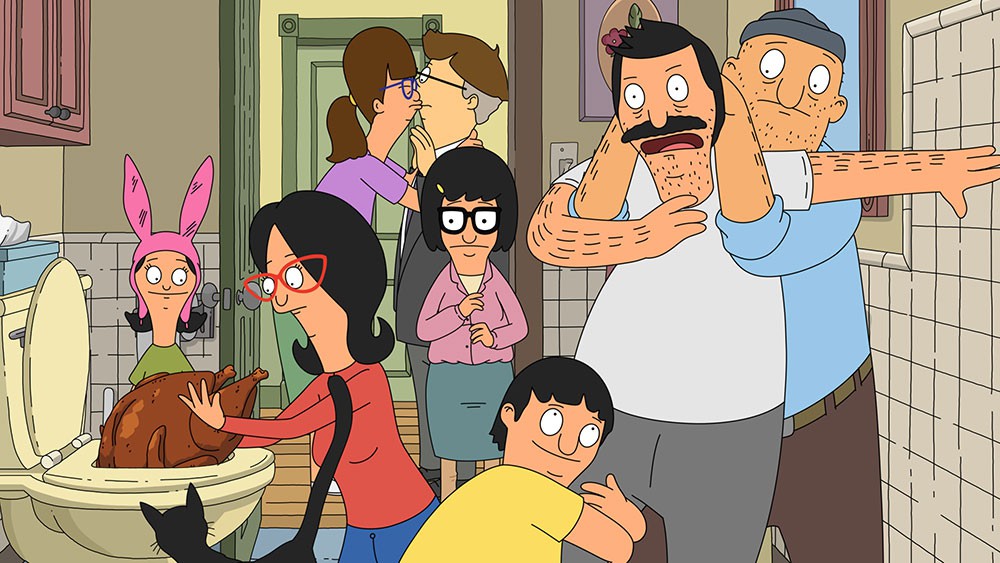 Four years in, and FOX’s Bob’s Burgers has become a cult phenomenon and beacon of cartoon feminism with its quick, childish laughs and vibrant cast of characters.

However, perhaps the notable thing about the show, which is now in its fifth season, is the showrunners’ ability to attract all-star actors and actresses to voice minor characters. For a show that boasts Sarah Silverman, Megan Mullally, and Tim Meadows in recurring roles and Kristen Schaal, Eugene Mirman, and the inimitable H. Jon Benjamin in the lead, Bob’s Burgers still manages to shoehorn A-listers in comfortably.

Nearly every entry in the 80-episode catalog features a guest addition of some kind, but there are ones that stick out the most. 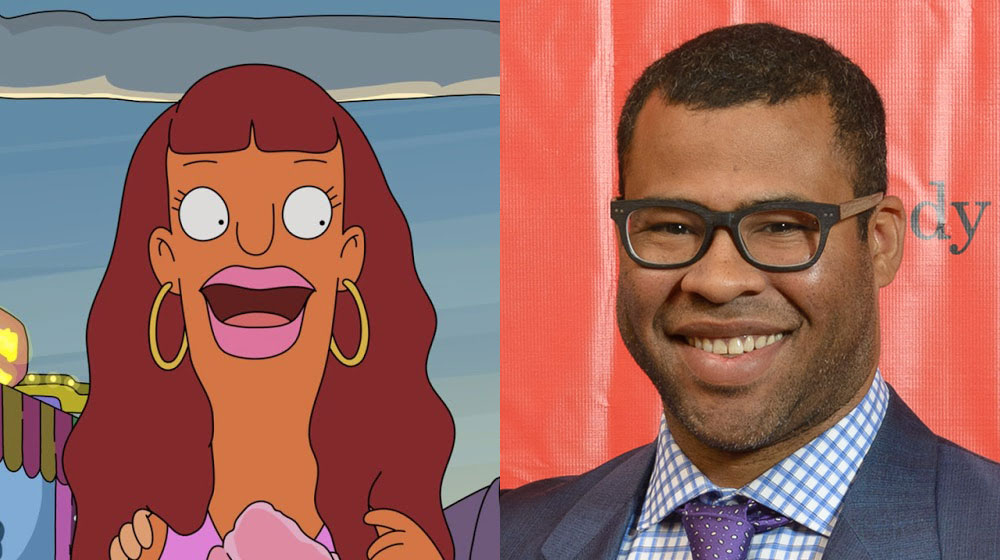 Gender swapping isn’t uncommon on Bob’s Burgers, but when Key and Peele co-star Jordan Peele takes on the psychotic girlfriend of Felix Fischoeder (played by Zach Galifianakis, who doesn’t make this list), Bob’s gets its most hilarious cross-gender character. Fanny is obnoxious and clearly gunning for cash, which is why Bob’s Burgers‘ two-part season 4 finale centers around her bumbling plot to kill Calvin Fischoeder and the Belchers. Peele is a fantastic character actor, and he totally buries himself in Fanny’s feckless dreams of sabotage and stardom. 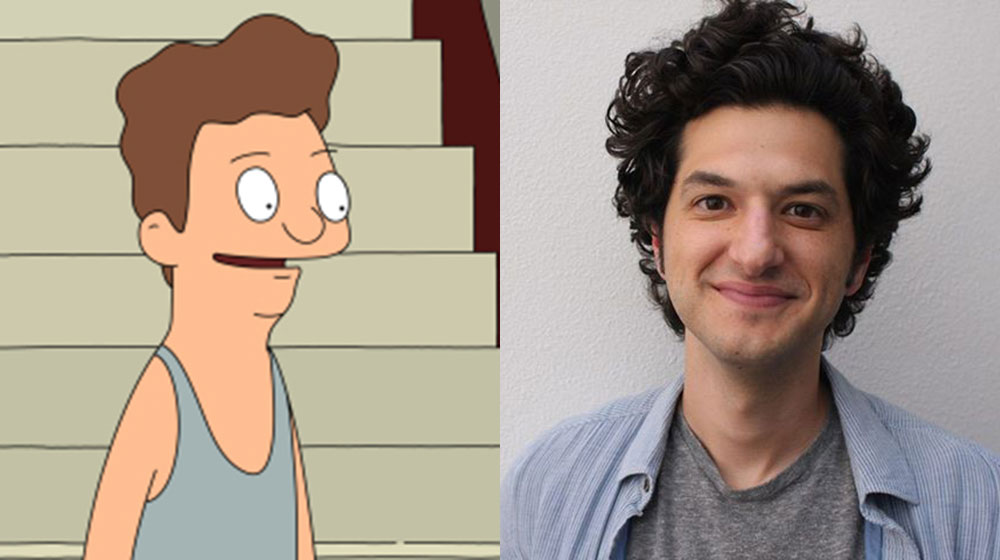 Tina Belcher falls in love with the mysterious voice inside the milk fridge when she, her siblings, and her mother get jobs at a Trader Joe’s stand-in in season 3. Josh, who is recognized by a turtle bite on his finger, is a student at a performing arts school, and the dramatic quirkiness is a perfect vessel for the well-coiffed Ben Schwartz (famous for playing Jean Ralphio on Parks and Recreations) to riff. He plays the awkwardness perfectly when it become clear that Tina is trying to live out a pre-teen polyamorous fantasy with Josh and Jimmy Junior. 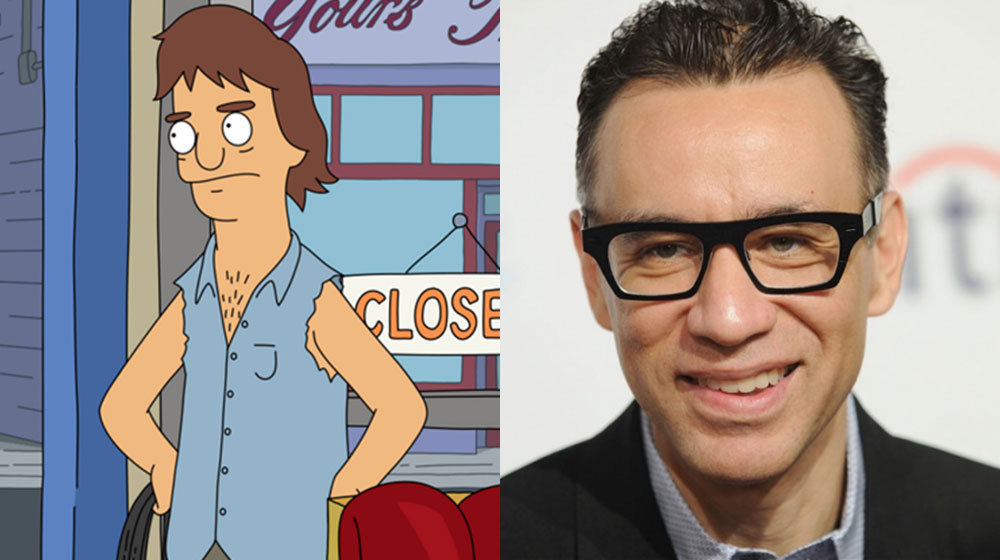 When health inspector Hugo is lured into a life of nudism by a local nude beach, Bob celebrates, but Fred Armisen’s replacement inspector proves to be an even more formidable nemesis. Though Tommy Jaronda seems like a good dude at first, he eventually blackmails Bob into letting him play his off-putting music in the restaurant, eventually killing Bob’s business and sending him crawling back to Hugo. Obviously, having a musical character is fitting for the Portlandia star, but Jaronda’s buddy-buddy menace is sagely captured by Armisen, who is never too confrontational in his manipulation of the “urban restaurateur.” 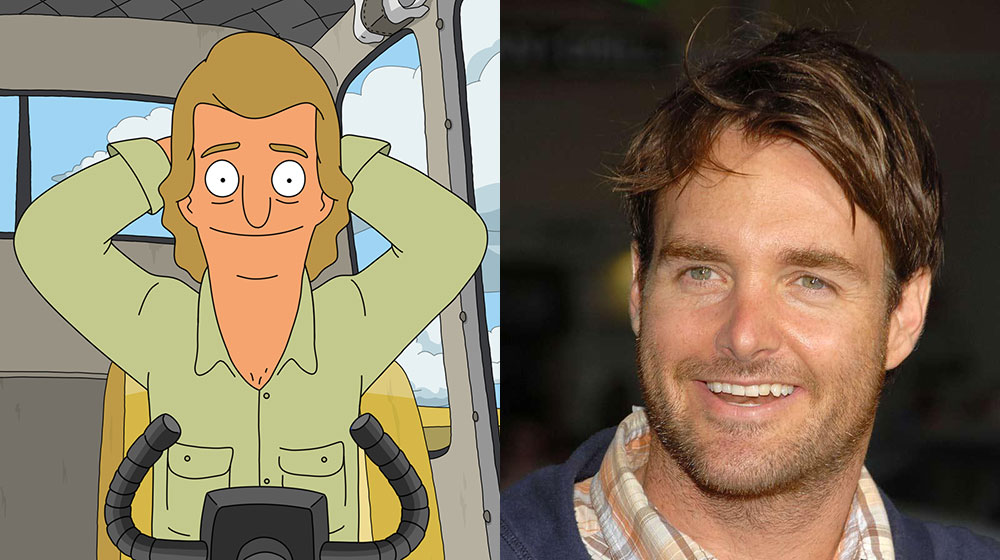 7. Will Forte as Upskirt Kurt

Upskirt Kurt is a seedy pseudo-romance novel stereotype who uses his status as a pilot to maroon lonely housewives on Quippiquisset (A.K.A. Quickie Kiss It) Island. With Forte voicing, Kurt immediately comes off as a sleaze, but he doesn’t make Kurt isolating. Paste Magazine likens Kurt to Zapp Brannigan from Futurama, which is spot on. He’s laughably fickle as he tried to seduce Linda and the shrewd Belcher den mother deconstructs his misogynistic scheme. 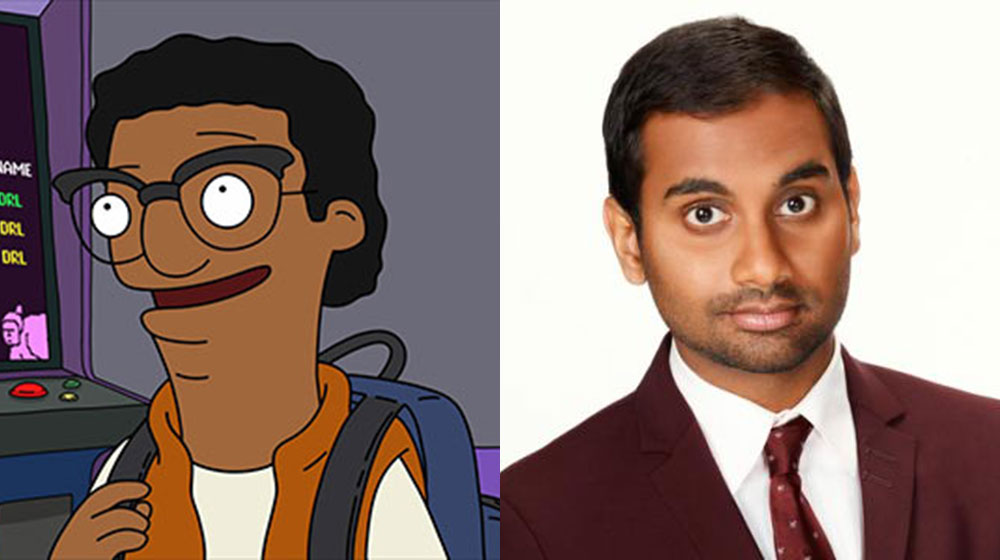 Aziz Ansari’s nerdy Wagstaff middle schooler Darryl (or DRL) is nearly a recurring character by this point, having helped Bob best Jimmy Pesto in a video game before later scheming with the Belcher children to turn a profit of a local nude beach. Darryl is a plotting, ambitious youngster, and Ansari’s voice acting (especially his signature nasal whine) lends the perfect amount of persuasion to the character. 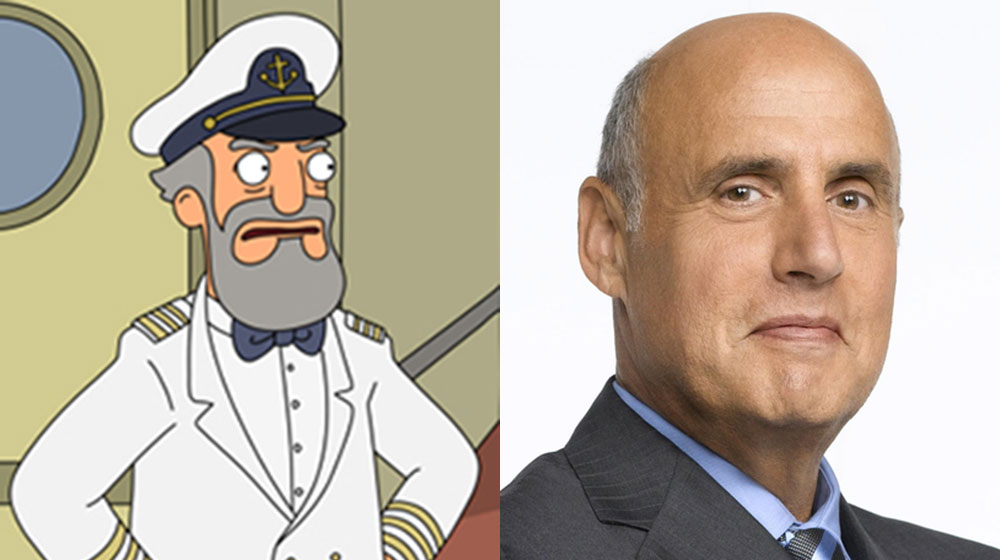 S4E3 “Mutiny on the Windbreaker”

Recent Golden Globe winner and hummus spokesman Jeffrey Tambor had a characteristically odd turn on Bob’s Burgers as a capybara-loving sea captain who courts Bob to become his new on-board chef. Many characters on Bob’s Burgers take advantage of Bob’s lack of perception and inability to read intentions, but few are as eccentric as Tambor’s Captain Flarty. Flarty is batshit zany, and this is not a truth that unravels slowly. Tambor plays unhinged so well, and Bob is the only one who doesn’t see it coming when he undocks the Windbreaker to trap the Belcher family aboard. 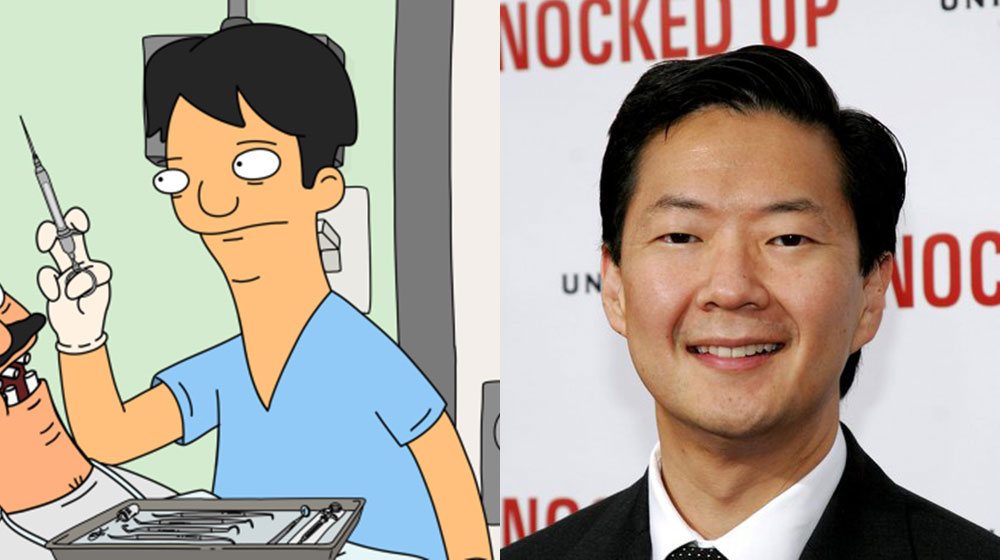 The Belchers’ dentist Dr. Yap is a great foil to Bob, as he’s been both a complement and an antagonist to the series’ lead man. The former nude model of Tina’s fantasy is a great co-conspirator in Bob’s plan to pawn off Gayle’s affections and an even better competitor in their later prank war. Ken Jeong’s ability to play the indignant, near-insane child while holding a position of authority is comedic alchemy, and it makes an otherwise banal dentist into an unpredictable episode-stealer. 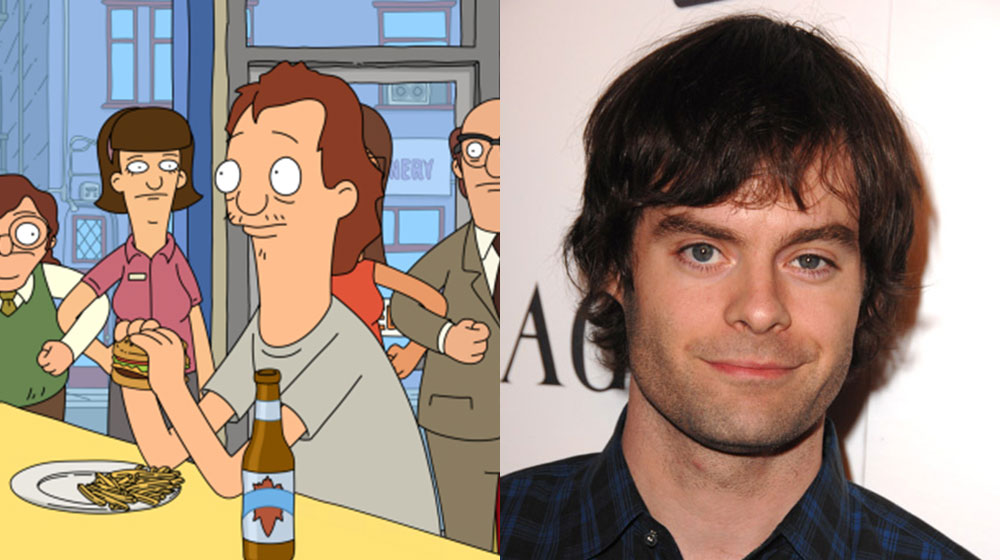 Bank robber/pedicab driver/Bob’s Burgers basement tenant, Mickey is a mesmerizingly charismatic jailbird who can’t help but charm Bob over and over. Bill Hader’s magnetic performance endears Mickey to the audience from the beginning, and we weather his many appearances with the hope that he’ll get it together, though he never manages to do so. He popped up two times in the most recent season, both times buddying up with the Belcher kids, illustrating Hader’s ability to make the scrupulous ne’er-do-well seem like a logical mentor for the young burger brood. 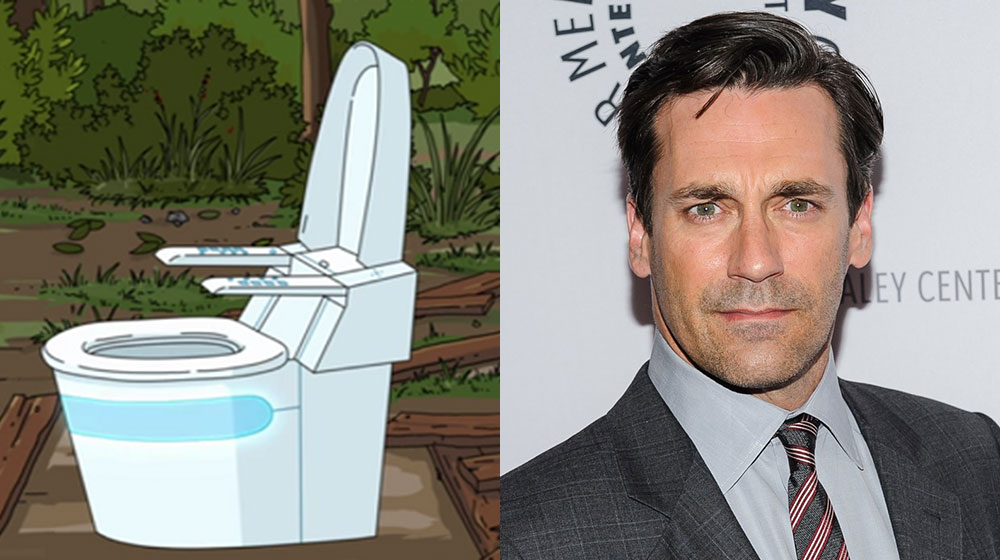 2. Jon Hamm as the Toilet

Mad Men‘s Jon Hamm is pretty shameless about his guest spots, as evidenced by his various Saturday Night Live performances and his turn as an outdoor smart toilet in season 3 of Bob’s Burgers. Much was made of this voicing, and though it’s not Hamm’s best work, the humorless precision of the toilet’s AI is a delightfully strange context to hear the notoriously stonejawed Hamm. As Gene and the toilet develop an obvious harmony, the Belcher boy seeks to protect the rapidly endearing potty from its dastardly creator. 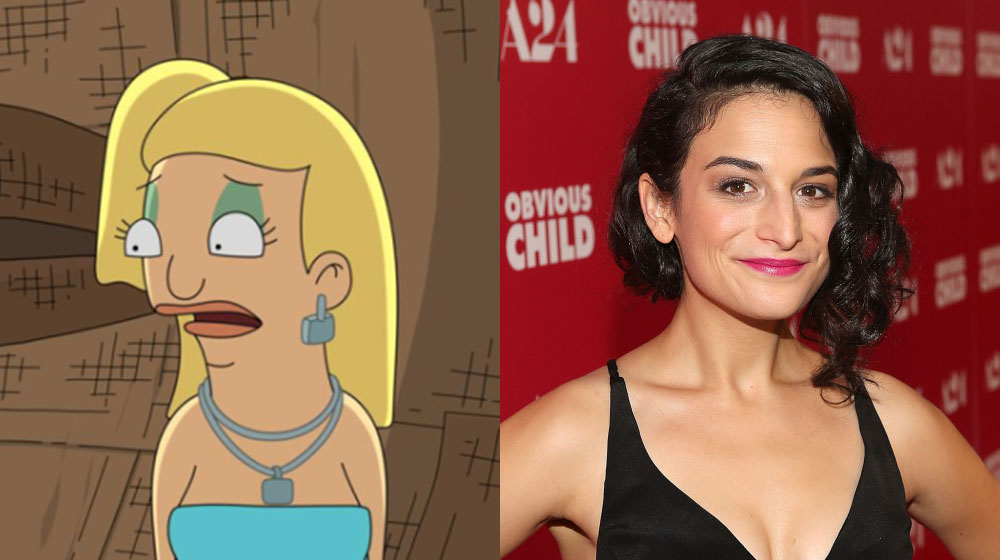 Jenny Slate is a vocal chameleon. Famous for voicing Marcel the Shell in the eponymous YouTube series, Slate’s materialistic middle schooler with a wicked vocal fry is the antithesis of Tina. Tammy Larsen is somehow an apt caricature of the conniving businesswoman trope all the while framing Tina as the mod pooper. This dichotomy is accomplished through Slate’s vapid-yet-diabolical portrayal. In “The Gayle Tales,” Tammy cameos as an apathetic gate guard, proving that Slate’s character will always be a welcomed addition to any circumstance.

Always a pleasure to have Boston.com’s Perry Eaton in studio for a chat. After we talked a bit about Pearl Jam at Fenway and Perry’s new podcast, he filled us in on Game of Thrones live and Narragansett’s new Bananagrams-themed brew. END_OF_DOCUMENT_TOKEN_TO_BE_REPLACED

No, not from afar, from the comfort of her couch. From the actual awards themselves. That’s where Meredith Goldstein was for the Oscars. She shared all the juicy, first-hand details with me. END_OF_DOCUMENT_TOKEN_TO_BE_REPLACED

It was wonderful having our good friend Meredith Goldstein back in studio this morning. She dug into the latest edition of Love Letters, which prompted us to play this song. And of course we had to discuss the Oscars. Make sure you’re following Meredith on Twitter, as she’ll be live-tweeting the awards this Sunday night. END_OF_DOCUMENT_TOKEN_TO_BE_REPLACED

Our first edition of TV Sets for 2016 might be better than every edition from 2015. END_OF_DOCUMENT_TOKEN_TO_BE_REPLACED