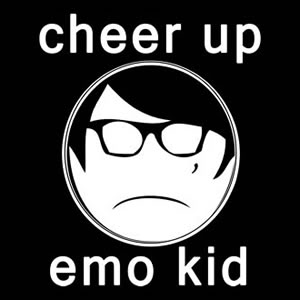 Inspired by Stereogum’s “30 Essential Songs From The Golden Era Of Emo,” I put together an all-emo 4:00 Free-For-All. I played a few tracks from Stereogum’s list, a few faves of my own, some newer fare, and even some screamo. Take a look and a listen. And cheer up, emo kid!

From their 1994 debut ‘Diary,’ perhaps the most important, respected album in the genre.
It’s New Year’s Eve in Boston, emo kid.
Hardcore alongside their Andover, MA neighbors Converge and Cave In, they’d later add an emotional edge.
The Illinois outfit is on their third go-round together since 1993, and they released a new album this year. It’s called ‘No Coast’ and it’s good.
Arguably emo’s most successful act. (Just don’t call them that.)
Purists that shun “commercial” music would likely disagree, but I back Stereogum’s claim that Weezer’s ‘Pinkerton’ is an important album in the emo cannon.
On the other hand, you’d be hard-pressed to find a music fan who doesn’t feel ‘Something To Write Home About’ by The Get Up Kids belongs in the aforementioned emo cannon.
Front man Blair Shehan started out in another emo act–Knapsack–before founding TJS in 2000. After a brief hiatus, the band released ‘A Gentle Reminder’ in 2012.
“This song will become the anthem of your underground,” sings Chris Conley. Yeah, it kinda did.
And suddenly, five lunatics from El Paso reminded everyone that “emo” is actually short for “emotional HARDCORE.”
Then “emo” became “screamo…”
…and everyone fell in love with Adam Lazzara.
Important to remember, though, that before everyone fell in love with Adam Lazzara, they were in love with Chris Carrabba.
Also important to remember that, before DCFC were an alt-rock juggernaut, they were that peculiar little emo band from outside Seattle.
The San Diego indie rockers aren’t thought of as a core emo act, but they’re important nonetheless. And they put out one of their best albums to date in 2012’s ‘Information Retrieved.’
We started with SDRE and we’ll end with them. “Lipton Witch” was recorded in 2009 and finally released this past April.