Thanksgiving football: Which NFL games to watch or skip 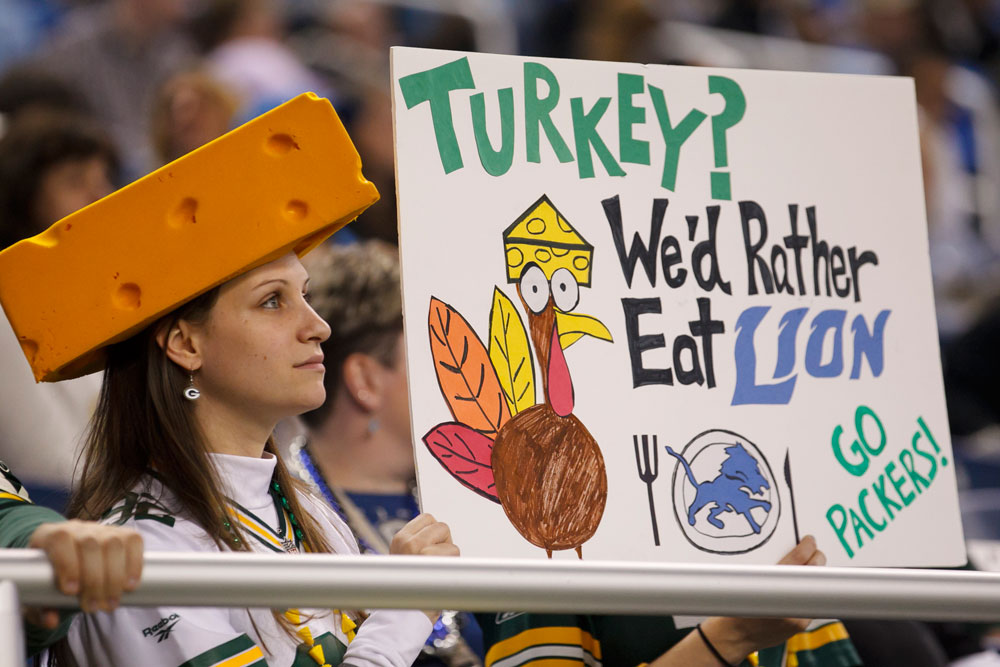 The Patriots might not be playing this Thanksgiving but that doesn’t mean you should tune out football on turkey day. NFL football is a Thanksgiving tradition and realluy, what would you do instead of watching it? Talk to your in-laws or a distant cousin? Exactly. Let’s look at each Thursday game and see which are worth breaking up that conversation with your uncle about his stamp collection.

This is the Thursday night game and most New Englanders will be suffering the effects of brews and tryptophan by the time this one starts. And Patriots fans can’t really support either of these teams after so many playoff bouts against Pittsburgh and Baltimore. This game is kind of important playoff-wise considering whoever loses will probably be missing the postseason this year. But considering both are only 5-6 right now, it would take a lot for either to make it even with a turkey day win. Watchability ranking: Unless you really need to get out of a conversation or just want a game to pass out in front of, just help yourself to more mashed potatoes and forget about this one.

The Cowboys also seem to put together an entertaining game whether they win or lose. Remember the team’s shootout with Denver and near-loss to Minnesota this season? The Raiders will roll with inexperienced Matt McGloin at quarterback looking to earn the team’s fifth win of the season. Oakland is pretty much done this year but could surely dampen the Cowboys’ dreams of winning the NFC East with an upset. Dallas is just one game ahead of Philadelphia in its division. The two rivals play on the last game of the regular season. If the Cowboys want to avoid another end of the season showdown for the division crown, they can’t lay an egg against lowly Oakland on Thanksgiving. Watchability ranking: Due to the roller coaster that is the Cowboys alone, this one is worth at least having on in the background during your Thanksgiving festivities.

This is the game you want to watch on Thursday. Yes, Aaron Rodgers is hurt and unlikely to play but the show must go on. The Lions will be trying to take control of the NFC North with the Packers vulnerable without its QB. At 5-5-1, Green Bay needs a divisional win in the worst way thanks to that weird tie with Minnesota last Sunday. If the Packers don’t win, the Lions have an opportunity to run away with this division heading into the final weeks of the regular season. But if the Packers do pull off the road victory, the NFC playoff picture gets a whole lot murkier. Hell, the Cardinals are making postseason noise. This conference can only handle so many more teams having shot. Watchability ranking: Big game, big consequences. Watch it.

The Black and Gold continue their run tonight at TD Garden. END_OF_DOCUMENT_TOKEN_TO_BE_REPLACED

Who will make the Class of 2018? END_OF_DOCUMENT_TOKEN_TO_BE_REPLACED

It’s been awhile since we talked Black and Gold. END_OF_DOCUMENT_TOKEN_TO_BE_REPLACED

You’re going to wish you were in the Northern Alps. END_OF_DOCUMENT_TOKEN_TO_BE_REPLACED

END_OF_DOCUMENT_TOKEN_TO_BE_REPLACED

Bill might be “on to Tennessee,” but we’re not. END_OF_DOCUMENT_TOKEN_TO_BE_REPLACED