‘Tell All Your Friends’ adds some teen angst to dance nights, preview playlist 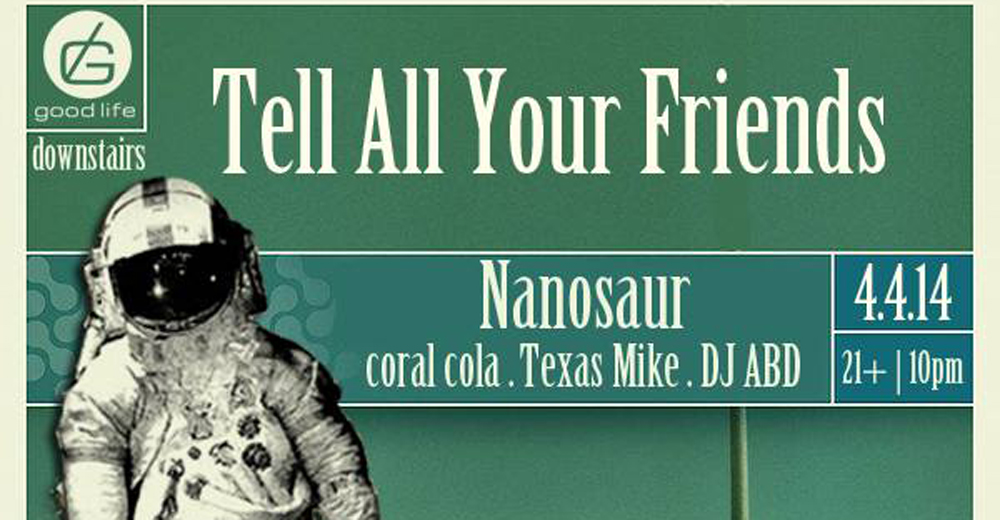 This Friday, April 4, Jeremy Karelis, owner and operator of popular music blog Steady Leanin’, and promoter of such events as Good Life‘s popular PVRPLE night, is putting on a party called Tell All Your Friends. The event, will feature sets from Oakland’s Nanosaur, and locals coralcola, Texas Mike, and DJ ABD, spinning “heart-wrenching teen angst classics for 4 hours straight.”

Karelis more often than not is a source for up-and-coming hip hop, and typically fuels his events with music of that, or similar genres. This party, however, is all about shared experience, nostalgia, and pride in the tastes of your teenage self.

“The idea came about after many in depth conversations about this particular style of music and finally admitting publicly to enjoying it privately,” he says. “After talks with [my friend] Carolyn Vallejo among others, I realized that many people have often felt the same way about music like this. I’ve never listened to many of these bands WITH others let alone talk about them, but I figured it was time to let it out and bond over it with other sad souls.”

Karelis knows suburban angst, and adds, “I’m assuming all of Boston’s suburbs will be in attendance.” To get you ready for a night of emotion and remembrance, Karelis and Vallejo have compiled a sample mix of what you may be hearing this Friday at Good Life.

Jeremy: “Throughout high school, this song stuck with me. Pretty much anything off ‘Deja Entendu’ and ‘The Devil and God Are Raging Inside Me’ stuck with me. Brand New really set the bar when it came to this specific sound. Every other similar band I just compare to this. Not much more to say about it.”

Carolyn: “The thing about this song, and Brand New in general, is that its tone is just harsh enough to reflect a lot of pain teenagers go through but beautiful enough to get kids excited about rowdy and optimistic about life. The whole ‘keep the blood in your head / and keep your feet on the ground’ line has just as much muscle as it did when it first came out (a lot of my tattoos are based on that lyric) and helped a lot of people through moods of feeling helpless or pissed off at mom and dad.”
Jeremy: “In early 2002, I was in 8th grade. I was still very into punk (actual punk) and ska. Publicly I never cosigned this album, but know I most definitely purchased and played the shit out of it in my Discman everyday. Honestly, this is the only Taking Back Sunday album I ever listened to in fear that nothing after it could even compare. ‘Cute Without the ‘E” is for sure a standout, but I still listen to all of ‘Tell All Your Friends’ and could probably still recite every word to every song. Whatever, I don’t care.”

Carolyn: “Lord knows everyone had a lyric from this song in their AIM away message. What I love about TBS is that everyone loved them whether they admit it or not. If you want to break it down in the most cliche terms, cheerleaders bragged about liking TBS to feel a bit edgy, jocks wouldn’t admit they liked TBS but I guarantee you if you play a song today a former jock will know the words, while punks and ‘undefined’ groups knew the band were worthy enough to give them credit.”
Jeremy: “I was first introduced to Senses Fail at summer camp right before entering high school. This EP, ‘From Depths of Dreams,’ was all I listened to for months. The raw emotion easily drew me to each of the 6 songs on the record and probably shaped my way of thinking for the worse.”

Carolyn: “I’ve been to a couple Senses Fail shows back in the day and I’ve never been so sweaty or proud to show up to home room the next morning with a new SF t-shirt. I’m way into ‘Let It Enfold You,’ but this song reminds me of my first boyfriend.”
Jeremy: “Citizen is very new to me. It wasn’t until recently that I decided to see what new bands my favorite old “angsty” bands spawned. I really liked the evolution I saw in this album, ironically titled, ‘Youth.'”

Carolyn: “I don’t listen to Citizen but I know they’re fucking amazing. Sometimes I can’t listen to music I know I’ll like so much because it will be too intense to listen to. Citizen is gonna be one of those bands so I need to brace myself to really get into their discography.”
Jeremy: “I used to despise ‘pop punk.’ I was a bit of punk purist with all my black hoodies, pins, patches, moshing, and the bullshit that came with it. I learned about this song this year and pretty much listen to it everyday. Maybe I’m going through some nostalgic-induced depression…it’s great though.”

Carolyn: “The Wonder Years recently went on a Pop Punk’s Not Dead tour with some of the best contemporary bands that champion the genre without apologies. They played with Man Overboard, whose ‘Defend Pop Punk’ slogan proves just how enduring this genre is. I don’t think we’re going through a revival, necessarily, but bands like TWY and Man Overboard and whatnot are kind of stretching out older influences into contemporary music and making it last as long as possible. One time I saw a kid wearing a ManO shirt running down Comm Ave screaming ‘DEFEND POP PUNK YEAHHHH SUCK IT.’ Kids go nuts for these bands and will absolutely start a war with any haters.”
Jeremy: “I first learned about Saves The Day when they opened for Weezer in 2001 at the Tsongas Arena in Lowell, MA. I bought the album, ‘Stay What You Are,’ after their set and religiously listened to it for a good year. My 8th grade ‘punk’ band even tried and failed covering a couple songs (including this one)…”

Carolyn: “Oh shit, I remember this song. Total classic. The first time I got high was to this song. Whoops.”
Jeremy: “I was actually introduced to Set Your Goals in college. I was going through a difficult time and searching for emotion. Kids at my school either listened to rap or melodic hardcore. I’ve been listening to rap for decades and the emotion I was chasing wasn’t there. When I first heard ‘Mutiny!’ and enjoyed it, I knew 7th grade Jeremy would throw rocks at current day Jeremy, but it’s what I needed. I can’t really get into any of their other albums if that’s any consolation for 7th grade Jeremy.”

Carolyn: “These are one of the bands that remind me of bombing down the road in the summer in a packed car. Fans of SYG get a lot of slack outside ‘the scene’ for liking such a pop punk band but they make you feel less stupid for being convinced you were in love at 15.”
Jeremy: “I learned about The Early November during my Senses Fail days when they were both on Drive-Thru Records. I always liked ‘For All of This.’ That whole EP has stuck with me to this day.”

Carolyn: “Drive-Thru is so legendary. I saw The Early November right after ‘In Currents’ came out in 2012. Everyone was a little on edge about whether they were too jaded to really put on a proper show but they destroyed that stage. The push pit was insane when they played this song. The kids were so sweaty and breathless from singing.”
Jeremy: ‘This is another new band in my iTunes library. They have a great mix of calm and collected verses with angrier hooks, sometimes similar to Brand New’s formula. I will be in attendance for their next Boston show in the corner with my hood up.”

Carolyn: “Seahaven rule because they’re basically just kids making music that has the same emotional element as what we had in high school but with some of the sharpest technical musicianship I’ve seen in a while (they’re insanely good live and I have tickets to see them in a few weeks and YOU’RE COMING). The song ‘Head in the Sand’ off the same album SOMEHOW balances how fucked up you feel when you’re younger and your dad’s a deadbeat and he left, without sounding so typical that no one listens to you. The thing about being a teenager is that the pain you feel and the intensity you endure at the time are very, very real, it’s just that adults brush it off because they know it passes with age. Seahaven capture that pain with this alt punk sound that gets you to actually take them seriously.”