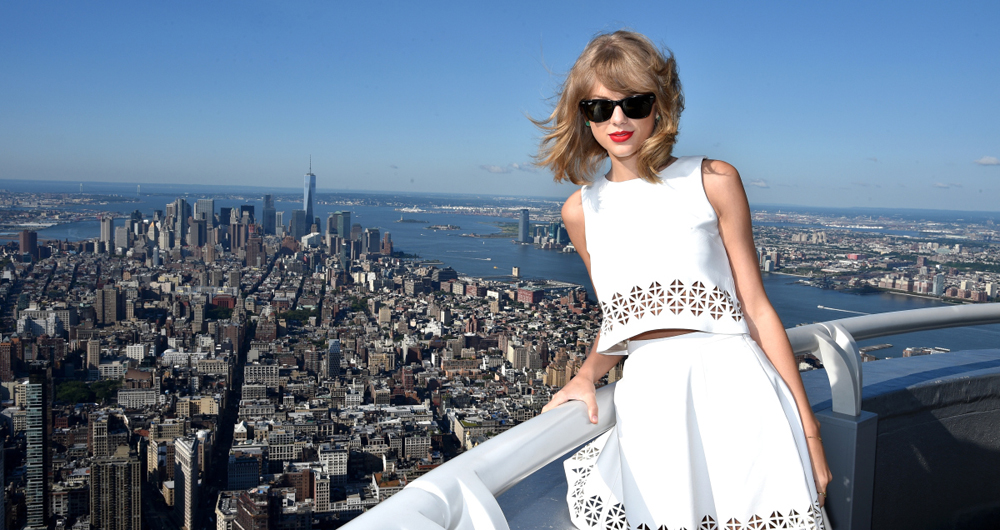 It has arrived. Taylor Swift. New album. “Shake It Off” is on there. But it’s not a country album. Guys. Taylor Swift. First in two long years. Seriously. Freaking out.

Taylor Swift’s first official foray into a full-on pop album is inspired by the sounds of the ’80s. Never mind that she was born at the tail end of the decade, Swift proudly declares her love of synthpop on this record. 1989 is all about catchy hooks and sing-along choruses that are sure to get stuck in your head for hours. The tracks have something for everyone, from power ballads to weekend anthems. Swift sets herself apart from other pop stars with her clever lyrics that bite back (“darling I’m a nightmare dressed as a daydream” is a standout line on the second track, “Blank Space”). Sure, Swift is aiming big with pop tunes for the masses now – but she’s doing so with an intelligent, sharp edge that stands out from the crowd.

Sounds like: A Flock of Human League Phil Collins Seagulls

-Michelle Buchman
The Tillerman returns after a five-year hiatus with “Tell ‘Em I’m Gone,” a bluesy collection of hymns and covers co-produced by Rick Rubin. The big talking point of the album is Islam’s overhaul of “You Are My Sunshine,” which is ballsy in that it completely restructures the melody, even if it is a little too “I Love My Dog” for 2014. But Islam is easy to forgive his corniness. The recent Rock and Roll Hall of Fame has been a luminary on the roads of American songwriting for nearly 50 years, and he still has the energy for desperado jams and dustups. On the record, he layers his tempered croon over fat harmonica blows and steely backroads guitar licks from Richard Thompson. Other covers, like “The Devil Came from Kansas,” bear “Tell ‘Em I’m Gone”‘s Memphis stomp too, but Islam’s originals are lost in the dusty reinvention. The most remarkable thing about “Tell ‘Em I’m Gone” is Islam’s re-inventiveness, rather than his inventiveness, which is to be expected from the erstwhile Cat Stevens.

Sounds like: Leonard Cohen kicked out of Bible camp for playing the blues, a tumbleweed’s entrance music, still Cat Stevens, after all these years

-Jerard Fagerberg
El-P and Killer Mike have been making more headlines for “Meow the Jewels,” an album remixing every track from “Run the Jewels 2” using only cat noises, than RTJ2 itself. But with “RTJ2’s” release, Killer Mike’s in-your-face political couplets and El-P’s aggressive rock-influenced beats relegate the feline beats to sideshow status. “RTJ2” rarely lets up over a tight 39 minutes, but “Close Your Eyes (And Count to F*ck)” featuring protest music predecessor Zack de la Rocha (frontman for Rage Against the Machine) is so potent it’ll make you want to throw your office chair out the window and start a new full-time job fighting the Man. Or at least send a strongly worded email to your supervisor.

-Kevin Slane
It’s been five years since west coast ska punk heroes Rancid have released any new music, but it has been more than a decade since most have even thought about the band. That’s not to take away from what they helped pioneer in the ska punk movement of the 90’s, but when most of us graduated middle school, that wave began to fade drastically. Don’t let that diminish the band’s footprint though, and certainly don’t let it cast a shadow on the work of lead man Tim Armstrong. Armstrong, perhaps more than any other product of ’90s ska punk, has used his influence to try and help the genre transition through the years, releasing a solo album with the help of dirty reggae studs the Aggrolites and collaborating with legend Jimmy Cliff on a Grammy-winning record among other projects. “…Honor Is All We Know” doesn’t fall flat, but it doesn’t move forward either. It’s likely the type of album that will translate with the ’90s street punk faithful and few others. That said, those who still have a soft spot for the genre (looking at you, Boston crew with a vicegrip on Dropkick Murphys), this album is exactly what the doctor ordered. Armstrong enlists more vocal help from bandmates than ever before, making for a more dimensional spin on the band’s previous work, and in total, they manage to dodge the dad-punk bullett, if that’s really even much of a thing yet.

Sounds like: A good reason to restitch that backpatch on your oversized tweed blazer