One of my coworkers doesn’t get kitchen etiquette. She always brings in foods that smell: fish (that she warms up–eww), broccoli that she’ll steam in the microwave, cheeses that make the whole fridge smell like feet. Once she left refried beans from takeout mexican in the fridge so long we thought a small animal had died. She’s also careless–besides leaving food around, she never really cleans up after herself. She’ll wash the pan she used, but when you go to use it, you realize there’s still food stuck in the corners, or she’ll spill something sticky over the counter and just…leave it there.

She is otherwise a really nice person, and I think it would embarrass her if I told her she’s being a slob. But it’s driving me crazy–the office is small enough that one batch of reheated salmon makes the whole place smell. Should I say something?

You have two options:

Theoretically, you could somehow find a way to gently guide her towards more thorough hygiene, but frankly, I don’t know how. Telling someone they’re not cleaning well enough is awkward at best. You can do it without getting too weird…once. You get one “oh, Coworker, I think you missed a spot on this entire stovetop” per…several weeks, and that’s probably pushing it.

Otherwise you’re just going to sound like the aforementioned nag, anyway. And you’ll be embarrassing someone you seem to otherwise like, to boot.

Are we all starting to understand why it’s so easy to find examples of passive-aggressive work notes on the Internet?

The one thing you probably can mention to her–away from other people, so it doesn’t seem like a shaming–is the smelly food choices. It’s not going to come off like as much of a personal indictment as the hygiene issues if you just practice your most offhand, unconcerned voice and tell her “because the office is so small, would you mind being thoughtful of which foods you warm up here? We just don’t have very good ventilation so cooking smells–like fish–linger.”

Then, if she ignores you, return to your above options.

…and possibly a passive-aggressive note. 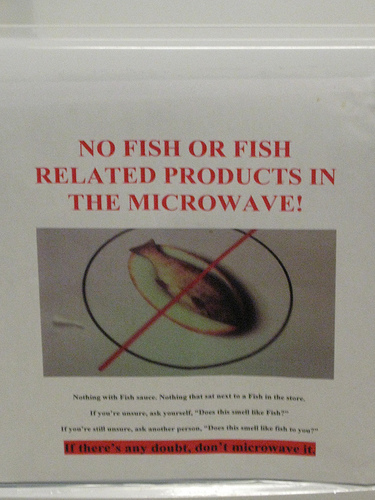 There’s a reason I can find this image on the Internet IMMEDIATELY.

This should never have happened. END_OF_DOCUMENT_TOKEN_TO_BE_REPLACED

I spend far too much time on Twitter. Here’s a handful of posts from last year that I found to be entertaining on one level or another. Enjoy. END_OF_DOCUMENT_TOKEN_TO_BE_REPLACED

Apologies in advance for burying this in your skull forever. END_OF_DOCUMENT_TOKEN_TO_BE_REPLACED

If you like cover songs, you’re gonna love this. And by love, we mean probably hate. END_OF_DOCUMENT_TOKEN_TO_BE_REPLACED

Whether you celebrate the unofficial beginning of summer on Memorial Day weekend, or Meteorological Summer on June 1, or the Summer Solstice, make no mistake: summer is here. END_OF_DOCUMENT_TOKEN_TO_BE_REPLACED

The nu-metal mainstays have covered the unlikeliest of songs. END_OF_DOCUMENT_TOKEN_TO_BE_REPLACED

Ladies and gentlemen, from the far-reaches of the internet, I present to you…La Boing Boing Rock Band. END_OF_DOCUMENT_TOKEN_TO_BE_REPLACED