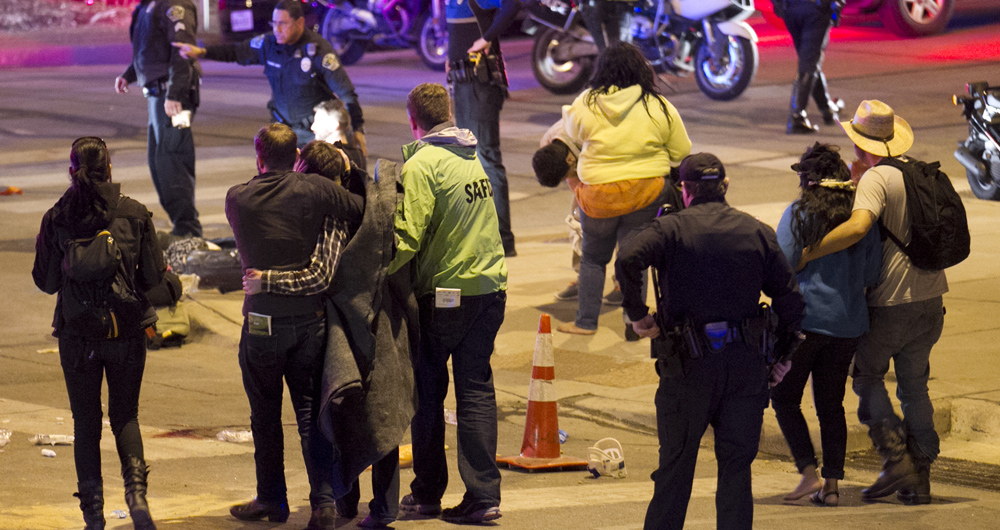 Saturday evening around 4pm is always the bleakest: it’s when 6th Street takes on the air of a state fair that’s about to pack up for the season, where the sidewalks are littered with chewed-off and torn wristbands and the barrage of riffs from competing sound checks get to be too much. The adrenaline of South By Southwest has all but expired on that dirty stretch of Austin’s pavement at that point, and it’s like the bands that flooded those few square blocks, the ones that proved, once again, that this is the place where the best up-and-coming talent comes to try their luck with a new audience and succeed, are little more than a faint memory. Still, you run into someone you know, you sleepily high-five or hug, you shuffle off towards the Iron Cactus, or whatever spot in the neighborhood doesn’t have a huge line to sit down, and you order tacos and a margarita. You talk about the week, gush about the bands you were lucky enough to catch—Future Islands, The 1975, Diarrhea Planet, St. Vincent, etc.—and the Gaga neon puke incident. You enjoy each other’s company and settle the bill, marveling at how cheap the drinks are in Texas, before the last night of SXSW officially begins.

This is how my Saturday at SXSW has gone since 2010. The first time I flew to Austin on assignment was on behalf of the Globe, coincidentally enough; I returned in 2011 and 2012 with DigBoston to throw Boston to Austin, the first official SXSW showcase to feature an exclusively Bostonian lineup. I used to spend those four days plotting out the perfect schedule around our party as soon as the festival posted its set times across town, making grids and listing back-up plans in case the “big shows” (i.e. Deer Tick playing Deervana for the first time at the Lustre Pearl in 2011; Fiona Apple headlining the NPR showcase and Jack White packing the Stage on 6th in 2012, etc.) were impossible to get into. There’s a science to enjoying your SXSW experience, and a lot of it has to do with preparing yourself for a nonstop marathon of music, embracing surprises and hustling from place to place as fast as your feet will take you.

2014 was different, and the nature of my work had nothing to do with it. I went to SXSW with Esquire and Elle this year, and the majority of my contributions to their SXSW coverage were Q+As and profiles of bands I saw and loved—as opposed to the recap coverage I’d regularly take on—so the running-around-town-like-a-maniac thing wasn’t so much of a requirement this time. When I went to the screening of “Jimi: All Is By My Side” on Wednesday night for a story, I had fully intended to make it to the NPR showcase afterwards to see St. Vincent and Damon Albarn, hoping that the long snake of a line outside Stubb’s would move quickly and that I’d make it into the backyard venue in time for the Blur frontman to premiere his new solo stuff. The screening of “Jimi” was delayed about an hour and change, so by the time we left the Paramount Theater, we were weighing the pros and cons of going: take the first night of SX easy, or line up at Stubb’s? Down a final nightcap before turning in early, or head up the street to see if that Tyler the Creator set got ridiculous? We opted for the former. I grabbed drinks with The Field Effect and some friends at the craft beer bar next to my hotel, and I called it a night, content, but kicking myself slightly for missing Damon Albarn and feeling too old for Tyler’s hijinks.

When I got to the elevator I checked Twitter, by habit, and balked at what I saw: a drunk driver had plowed through a crowd of people in front of the Mohawk and Cheer Up Charlie’s, two venues we’d considered hitting just a moment before. Instagram and Facebook told similar stories, and friends of mine—actual friends, not acquaintances, not random people I’d met that afternoon—were posting shots from the balcony of the Mohawk to draw attention to the horrific scene unfolding beneath them. I booked it back to the hotel room, opened my computer, and sat glued to it for the next two hours, sending out blanket texts to everyone I knew in Austin as a ton of them were very feasibly hanging out at that intersection. Everyone was present and accounted for, but still: nearly 30 people were hurt, and some people died? What the actual fuck had just happened?

As we continued to refresh our browsers and rehash what we’d heard, I started to talk to the buddies I roomed with about how this, sadly, didn’t seem like a totally unfeasible thing. For whatever reason—blame Gaga and her Doritos machine if you have to—SXSW this year felt way, way too crowded and out of control. 6th Street has always been insane, and the line at Stubb’s for the NPR party has always been long, sure, but that first night in Austin felt like a frenzy long before that drunk driver decided to flee a checkpoint and ruin (and end) a lot of peoples’ lives. The banners affixed to the front of venues were literally billboards, with more corporate logos plastering stages and front doors than I’d seen at the festival to date. Walking down 6th was pretty much impossible, and the lines swelling from the sidewalk into the street were difficult to navigate, especially if you tried walking around them. It was an exhausting melee, and it wasn’t even the end of the first night yet. We knew we’d be in for a long—albeit great, as usual—SXSW, but we didn’t know that the safety concerns that come with crowding and maintaining order on the streets of Austin would be that compromised.

The pallor was tough to shake from the night before, and the rest of SXSW didn’t bank on the same lighthearted debauchery as it had years prior—but the music prevailed. The Mohawk and Cheer Up Charlie’s were open for business later that night; the festival launched SXSWCares to raise funds for the victims of the brutal accident. Festivalgoers slept too little, drank too much, didn’t wear earplugs and played venue hopscotch into the wee hours of the morning as they came there to do. The “big” acts—Gaga, Kanye, Jay-Z—were more or less an afterthought overshadowed by the accident and the earnest bands that actually came to Austin to do solid work. All walked away from Austin with a few new favorite bands in their pocket, but that didn’t change the fact that SXSW has turned into a giant, corporate creature—or at the very least, it’s size has contributed to some pretty scary developments that more difficult to scoff at than in previous years.

But Saturday rolled around, and the exhaustion that set in was a content one with a bit of an edge. Maybe SXSW has gotten too big to be enjoyed in the same way. Or maybe it’s just a big, growing behemoth that we need to come to grips with on our own terms, as the best kind of loyal music nerds.

Enter to win tickets to see Trio Da Kali at The Villa Victoria Center of the Arts (Newton, MA) on April 10th. END_OF_DOCUMENT_TOKEN_TO_BE_REPLACED

END_OF_DOCUMENT_TOKEN_TO_BE_REPLACED

Enter to win tickets to Rhye at The Paradise on February 28th. END_OF_DOCUMENT_TOKEN_TO_BE_REPLACED

Her new album has been pushed back, but we have Kimbra’s new single for you. END_OF_DOCUMENT_TOKEN_TO_BE_REPLACED

The folk duo returns with a new record this week. END_OF_DOCUMENT_TOKEN_TO_BE_REPLACED

Now that we’re done looking back at 2017, let’s look ahead at 2018. END_OF_DOCUMENT_TOKEN_TO_BE_REPLACED

Our first Song of the Week for 2018. END_OF_DOCUMENT_TOKEN_TO_BE_REPLACED

In a year when so many things were off, the music was right on. END_OF_DOCUMENT_TOKEN_TO_BE_REPLACED