Super Bowl Halftime Shows: Who Did It Better, NKOTB or Aerosmith? 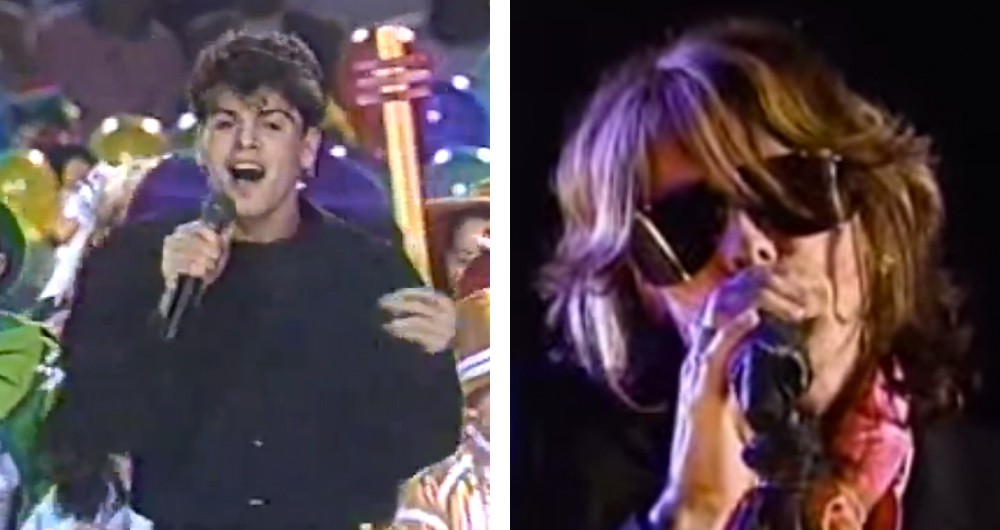 In the history of the Super Bowl Halftime Show, it’s safe to say that we’ve seen more duds than studs (looking at you, Up With People). But over time, it has become a greater production, a greater spectacle, and in turn, it’s difficult to argue that its quality hasn’t improved, too.

Two Boston bands have headlined the show over the years: New Kids on the Block in 1991 and Aerosmith in 2001. It’s time we take a look back at both performances an determine which one did it better.

New Kids on the Block

Taking the theme of “Small World Tribute to 25 Years of the Super Bowl,” the New Kids were essentially the first halftime performers of the modern era of the Super Bowl. For that reason alone, this show is somewhat groundbreaking. The difficulty comes in wading through the cheese of the whole thing. On top of NKOTB being the bubblegum kings of the early ’90s, the performance was kicked off by a corny medley of Disney songs, which always adds an element of creepiness.

But the weirdest part comes with the rendition of “This One’s for the Children,” where several young tikes come scurrying out from the sidelines to sit on the laps of each band member, as if they had just been reunited after a kidnapping.

The performance is mostly awkward, but it’s not all bad, just outdated more than anything. NKOTB has the advantage on dance moves, but even the song selection was a bit weak. “Step by Step” was a decent hit, but no “You Got It (The Right Stuff)”? No “Hangin’ Tough”? I guess when Disney is the sponsor, it needs to be as squeaky as clean can get.

Setlist: “Step by Step,” “This One’s for the Children”

The Bad Boys from Boston don’t look all that “bad” sharing the stage with ‘N Sync, but the truth is, this performance was actually pretty damn good. Billed as “The Kings of Rock and Pop,” Aerosmith wove through hits from three different decades (if we’re counting “Jaded” as a hit– I’d say yes), and tossed the mic around with Timberlake and co., Britney Spears, Nelly, and Mary J. Blige (who should’ve gotten more face time).

Steven Tyler’s vocals are on point, and predictably sound a bit more authentic than those of the New Kids despite looking, as Saturday Night Live recently put it, like “a dream catcher come to life.” Even Joe Perry gets a bit of the limelight, playing it cool and ripping out a few spider-fingered solos. Nelly rattles off a verse of “E.I.” over the “Walk This Way” riff, which is a bit superfluous, but holds up better than it should 14 years later.

Most of all, the whole production is a whole lot tighter. A decade after New Kids, the Halftime Show ditched the cheesy announcer, opting for more seamless segues, and the spectacle of the whole event seemed more rich, more of an event unto itself. To some, it may be cringeworthy seeing Steven Tyler crooning beside pop’s prettiest faces, but then again, it’s almost refreshing seeing them outperform the biggest acts of the era, more than 30 years after Aerosmith formed. There’s no doubt that this medley was the stronger of the two.

Key Moment: At 5:30, Steven Tyler hits a money note and the camera does this weird, exceptionally early-’00s panoramic camera thing.

Enter to win tickets to see Trio Da Kali at The Villa Victoria Center of the Arts (Newton, MA) on April 10th. END_OF_DOCUMENT_TOKEN_TO_BE_REPLACED

END_OF_DOCUMENT_TOKEN_TO_BE_REPLACED

Enter to win tickets to Rhye at The Paradise on February 28th. END_OF_DOCUMENT_TOKEN_TO_BE_REPLACED

Enter to win a pair of tickets to attend The Hess Collection Seminar and Dinner as part of Boston Wine Festival 2018 at the Boston Harbor Hotel on Wednesday, March 14th. END_OF_DOCUMENT_TOKEN_TO_BE_REPLACED

The Black and Gold continue their run tonight at TD Garden. END_OF_DOCUMENT_TOKEN_TO_BE_REPLACED

Her new album has been pushed back, but we have Kimbra’s new single for you. END_OF_DOCUMENT_TOKEN_TO_BE_REPLACED

Who will make the Class of 2018? END_OF_DOCUMENT_TOKEN_TO_BE_REPLACED

It’s been awhile since we talked Black and Gold. END_OF_DOCUMENT_TOKEN_TO_BE_REPLACED