Stuff I Shout at the TV: ‘Scandal’ recap – ‘The Fluffer’ 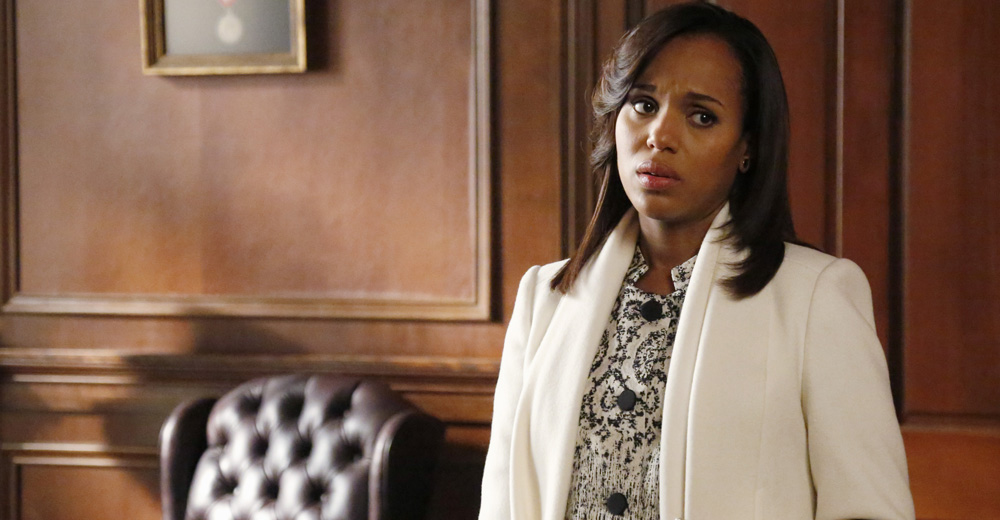 “Scandal” now sits just a few weeks away from its season finale, the point in the year where shows usually start slamming the accelerator and amping up the intensity. If you watch “Scandal,” you know that its intensity meter was already pretty maxed out, so this should be fun. Last night’s episode, titled “The Fluffer,” did not disappoint. It was full of intrigue, tension, and, of course, a giant heap of ridiculous moments. Here’s a few things it left me shouting at the television.

Olivia Pope’s newest goal is taking down super-spy organization B-613, and to that end, she has enlisted her father and former-head-of-B-613 Eli Pope. But before they get to work, she has a demand: Eli has to promise he won’t harm President Fitzgerald Grant. So Eli says, “I won’t touch a hair on his head,” which effectively pacifies Olivia’s distrust. And you’re just sitting there watching and thinking, “That’s it? You feel good about that?”

Let’s review the key facts: 1) Eli is a vengeful man and known murderer. 2) Grant ruined Eli’s life and is banging Eli’s daughter. Putting aside the possibility that a man trained in deceit who has carried on massive lies for decades at a time could just be, I dunno, not telling the truth, look at the size of that loophole. Won’t touch a hair on his head? I can just see Eli maniacally tying Grant to a set of train tracks while shouting, “Don’t worry Olivia, I’m not touching his hair!” Or contracting out the murder to one of his many contacts in the professional-killer industry, then pulling a “What? I’m not the one killing him.” Or, finally, what if Grant’s hair is the loophole? I mean, when someone’s hair is that bed, couldn’t you call destroying it a mercy killing?

I know I’ve made this point in previous columns, and I try not to double dip on these jokes, but my God, does every private conversation have to happen in public spaces? VP candidate Andrew (whose last name is Nichols, guys!) decides to confront First Lady Mellie about the fact that she hasn’t been returning his calls, which is somehow still code for “you’re blowing me off” even though it’s 2014 and nobody calls anybody anymore. Normally, characters on “Scandal” have their discussions of top-secret stuff off to the side of the hallway, but Andrew does it right in the middle. That’s right, the middle of the hallway of the White House is where he confronts THE FIRST LADY ABOUT THE AFFAIR SHE’S HAVING WITH THE GUY RUNNING FOR VICE PRESIDENT. But he’s whispering, so it’s totally cool.

I THINK I WOULD’VE PLAYED THIS ONE DIFFERENTLY.

Back at the beginning of the season, it came out publicly that Fitz was having an affair. Because it would have been much more problematic to confirm that the mistress was Olivia, the presidential team paid then-White-House-staffer Jeanine Locke $2 million to say it was her. Because apparently Jeanine Locke was the most ill-informed person in the world on the concept of leverage. Two million dollars for a stance that would ruin her life and MAKE OR BREAK THE PRESIDENT OF THE UNITED STATES? I mean, even all the way back in 2013, that was chump change as far as presidential hush money is concerned.

But now there’s breaking news. Abby sees something on the TV and does that thing that happens in the TV universe where a character sees a news story come on, takes the time to tell someone to turn up the volume, then takes the time to call someone else to tell them to turn on the TV, then waits for them to do so, and then we see the reporter onscreen at the absolute beginning of the news story.

The story cuts to a Jeanine-Locke press conference announcing her new tell-all book: “Taken for Granted.” [Side note: Great fucking title]. Among other things, the book apparently explains how the president is a “satisfying” and “impressive man” in bed. When asked the follow-up question that a real journalist would totally ask, “Tell us whether the President is a breadstick or a baguette,” she responds baguette.

Chief of Staff Cyrus Beane speculates that one of the other presidential candidates must have topped the presidential team’s original payoff. Personally, I would guess that, yeah, if you could deal a major blow to your political opponent for $2.1 million, you’d probably do it. I mean, you’d have to scrape through a few couch cushions and use that giant jar of change you’ve been saving up next to your desk, but I think you could find the money somewhere.

But here’s my problem. If you’re running against Grant for president and paying his mistress to write a tell-all book, wouldn’t you tell her to make him bad in bed? I mean, I hate Grant, but hearing that he’s a great lover with a baguette-sized member kinda makes me want to vote for him.

Fitz really lets his temper loose in this episode and the results are about as boring as half an hour of C-SPAN. The first incident comes when Fitz is (you’re not going to believe this) being moody. He’s upset that Andrew is banging his wife. And Fitz, a man who is a serial philanderer and generally treats his wife like shit values the sanctity of marriage above all else, wants the affair to be over.

Now let’s say you were Fitz. Would you a) talk to to the guy banging your wife and use your position as president to make him stop or b) ask your mistress to do it for you? If you chose A, congratulations, you’re not a total loser-face. Fitz chose B. Olivia is naturally upset at her lover demonstrating such strong feelings for another woman and storms out. And in a fit of anger, Fitz… knocks what I’m pretty sure was a binder off a coffee table. It was um… frightening? Then later, Mellie is showing him several different ties he could possibly wear to an upcoming event by draping them over her arm. In another fit of rage he… knocks the ties off her arm with all the force of a calm breeze, then watches as they gently plop onto the ground. He storms out of the room and closes the door with medium strength. Devastating!

WAIT, WHY ARE YOU GOING TO OLIVIA’S OFFICE?

Meanwhile, Olivia’s hard work has paid off. Superspy Huck has hacked into B-613. He suddenly has access to all of the agency’s money, files, schematics, and other buzzwords for important shit. She gives the order and Huck shuts it down. The only problem is that at that exact moment, B-613 was monitoring a presidential assassination team that was about to take action. A team that was setting out with a bomb in tow to take out POTUS. A team that had just asked the question, “Are we going White House or campaign trail?” at the very moment this happened.

B-613-leader Jake Ballard has to act fast. What does he do? Does he go to the White House or the campaign trail? White House or campaign trail??!! The terrorists are on the move!! He goes to… Olivia’s office. Of course. He storms in, shoves her up against the wall and tells her, “You just killed the President.” And then we cut to credits.

We don’t know for sure what’ll happen next, but we know it’s going to be fun, because the season finale is two weeks away and “Scandal” never disappoints.

Always a pleasure to have Boston.com’s Perry Eaton in studio for a chat. After we talked a bit about Pearl Jam at Fenway and Perry’s new podcast, he filled us in on Game of Thrones live and Narragansett’s new Bananagrams-themed brew. END_OF_DOCUMENT_TOKEN_TO_BE_REPLACED

No, not from afar, from the comfort of her couch. From the actual awards themselves. That’s where Meredith Goldstein was for the Oscars. She shared all the juicy, first-hand details with me. END_OF_DOCUMENT_TOKEN_TO_BE_REPLACED

It was wonderful having our good friend Meredith Goldstein back in studio this morning. She dug into the latest edition of Love Letters, which prompted us to play this song. And of course we had to discuss the Oscars. Make sure you’re following Meredith on Twitter, as she’ll be live-tweeting the awards this Sunday night. END_OF_DOCUMENT_TOKEN_TO_BE_REPLACED

Our first edition of TV Sets for 2016 might be better than every edition from 2015. END_OF_DOCUMENT_TOKEN_TO_BE_REPLACED