Stuff I shout at the TV: ‘Scandal’ recap – ‘No Sun on the Horizon’ 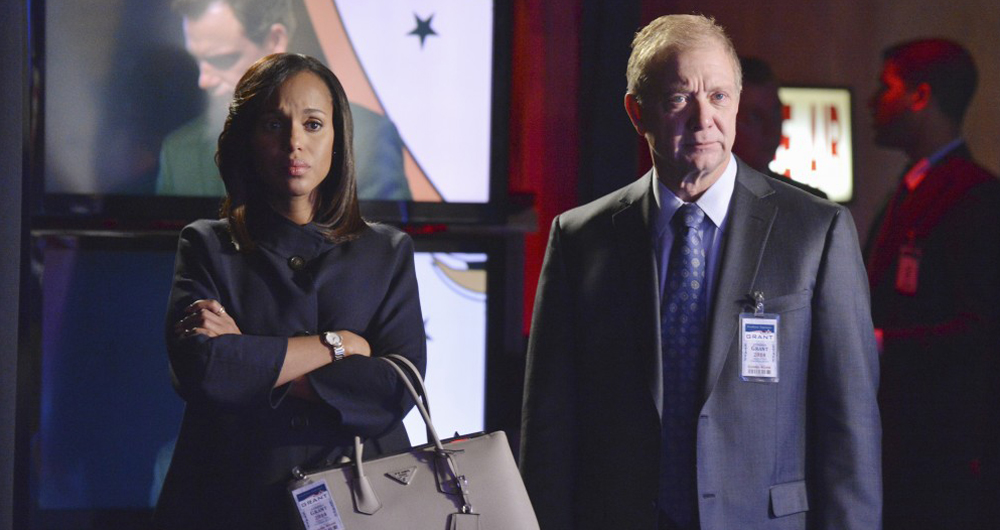 For about the first three-fourths of last night’s episode of “Scandal” called “No Sun on the Horizon,” I considered submitting a recap for the show that just went, “A lot of people shout at each other,” and calling it a day. Then the last 15 minutes happened and they were pure “Scandal” in every way, and you bet your ass I loved it, even as it drove me nuts. Here’s a few things last night’s episode left me shouting at the television.

Jake Ballard’s new job as head of a ruthless spy agency is eating him up inside. So he does what every male on the show does in times of angst: He asks Olivia to run away with him.

There was a point on the show where this was plausible. Where Olivia had her problems, but also seemed like a smart, beautiful, good woman.

Um, we are completely past that point. Olivia is a train wreck. She is having nervous breakdowns every ten seconds, she has covered up murders, she has ruined the lives of people she loves, and she constantly gets into vicious fights with everyone she dates. I would also say she has a drinking problem, but I’m kind of unclear on whether you call it a drinking problem if the person is addicted to red wine. Is it like how if you do cocaine you can claim you don’t have a drug problem, just because it’s a rich person’s narcotic?

Eventually, Jake realizes Olivia loves President Fitz, not him. This is only like the 2000th time he’s figured this out. Yet he still keeps chasing her because “Scandal” is “Dawson’s Creek,” except that this time you’re hoping the insufferable one (Fitz/Dawson) and not the cool one (Jake/Pacey) ends up with the girl, because Olivia is no Joey.

The central storyline of this show is that Vice President Sally Langston has been feeling guilty about killing her husband, Daniel Douglas, and has decided to confess the murder during the upcoming presidential debate. Since White House Chief of Staff Cyrus Beane helped her cover up the murder, this would not only wreck Sally’s campaign, it would wreck the president’s, too. So Cyrus instructs Jake to kill the vice president, because murder is how Cyrus solves every problem.

Side note: am I the only one who would watch a spinoff show that is just Cyrus ordering secret spies to kill people? Like the waiter who added a gratuity to his party’s check even though there weren’t eight or more of them at the table? Or the dry cleaner that couldn’t get that mustard stain out of his suit?

The chief of staff putting out a hit on the VP seems a bit unlikely, but then you see the debate moderator, and you realize we’ve really left reality behind, because she might not even be 30 years old. And I’m pretty sure there’s a law that no one can be a presidential debate moderator unless he or she lived through the Eisenhower administration. Where is the character who is the equivalent of Jim Lehrer or Bob Schieffer? That’s the kind of on-death’s-doorstep person that runs a debate.
So now we’re at the debate. Jake has positioned a spy in the rafters who has trained a rifle on Sally and been given the instructions “Look for signs that she’s about to go off script…If she starts to falter, I’ll need you in position to take action… Don’t miss, you’ll have one chance to take her out.” Sally is drinking an insane amount of water, clearly nervous about her upcoming confession. Finally, she feels it. This is the moment. “Ladies and gentlemen,” she says. “I have a confession to make.”

Now look, I’m not saying I’m for this whole killing the vice president thing, but if your orders are to look for any sign of her going off script and to kill her before she confesses to murdering her husband, I’m going to say that the words, “I have a confession to make” are a pretty good cue to fire.

Then there is a long pause during which Sally is quite noticeably not-yet-assassinated before she says, “I am compelled to say–” Now surely that is the sign to fire. “I have a confession to make” followed by “I am compelled to say…” What exactly is the spy waiting for? For Sally to actually pull out photos of herself at the crime scene?

Luckily, the president jumps in. He says something semi-self-incriminating which Sally takes as a sign from God that she should not confess, so she shelves the confession idea and turns on Fitz in hopes of winning the debate. Crisis averted. She starts railing against the debt tripling, ineffectual foreign policy, a bad jobs report, and marital infidelity (all of which sounds plausible because as this show reminds us over and over, FITZ IS A TERRIBLE PRESIDENT) before the moderator jumps in and says, “I’m sorry madame vice president, we really do have to move on.”

Wait! But what about the part where the vice president of the United States stopped the entire debate and said that she had a confession to make, then never made the confession?! Shouldn’t we go back and address that? Moderator? Democratic candidate who’s running against her? Anyone think that stone might be worth looking under? Anyone?

I would make a joke here about how this never would have happened if Jim Lehrer were running the debate, but if you saw him do Obama-Romney in 2012, you probably know that’s not true.
As the episode nears its end, James Novak and David Rosen– the two men working to expose the Daniel Douglas murder– meet up with the reporter they’ve been leaking information to and some other girl who looks familiar, but I’m really not sure who she is.
They start talking and suddenly, James and David realize that this is a setup– that they’ve been tricked into coming here. But it’s too late. Someone with a gun is marching towards them.

He shoots the reporter.

He shoots that other girl.

The camera turns around, revealing that the gunman is Jake. That’s right, the guy GUNNING DOWN FOUR PEOPLE IN THE MIDDLE OF A PUBLIC STREET decided not to wear a mask, or really do anything to conceal his identity, because, you know. Jake points the gun one last time into the camera and fires. But they do that thing where you’re not supposed to know who he’s firing at because they don’t show you the entire frame and then they run a teaser after the show saying next week they reveal who got shot (but if you look at the angle of the gun and where Jake’s standing, it really seems like he shot David, but whatever). Cut to black.

And now I’m shouting at the television because whoever died, they just killed one of the show’s most likeable characters and if they’re going to do that then I don’t want to watch anymore, but yes, of course I’ll be tuning in next week, because this is “Scandal” and I need to know what happens next.