Stuff I shout at the TV – ‘Scandal’ recap – ‘Flesh and Blood’ 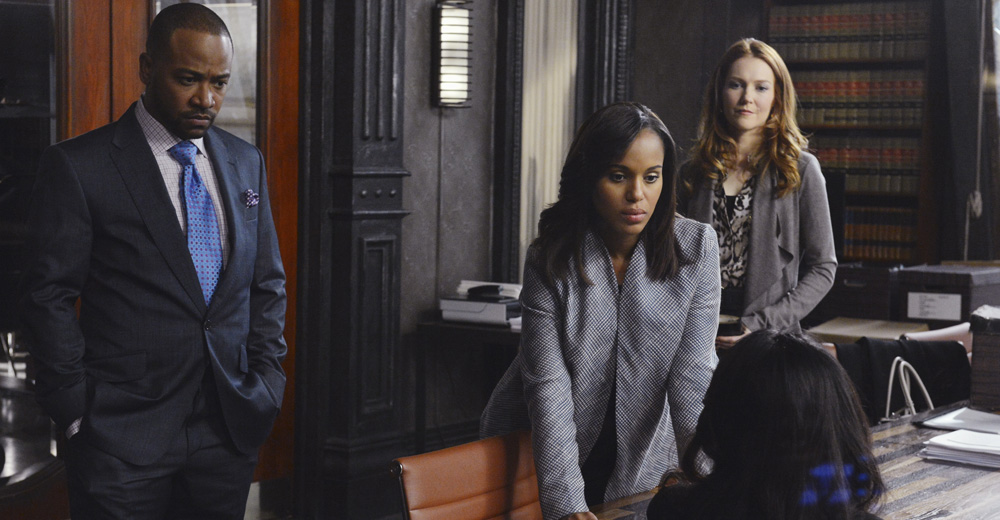 Last night’s episode of “Scandal” started with panic in the air. The wheels were in motion on a bombing meant to take out the president of the United States being orchestrated by Maria Wallace (AKA Olivia Pope’s mom) and some dude from Russia. Because no matter how many countries America may go to war with, there will never be a better super-villain accent than Russian.

To thwart this mission, Eli Pope has resumed command of spy agency B-613 and is now working in conjunction with Olivia’s staff. How did he wrest control of the most powerful spy agency in the world from the hands of now-former leader Jake Ballard? Well, there was this scene where Eli came in and said Olivia had to choose who would be in charge of B-613, Eli or Jake. And Olivia– who has no authority whatsoever– chose Eli. Then Jake, whose entire directive is to protect the republic at all costs, seemed kind of miffed, conceded and walked out of the room. It’s possible Jake isn’t as good at his job as we thought he was.

And so the stage was set for last night’s episode of “Scandal” titled “Flesh and Blood.” Here’s a few things the show left me shouting at the television.

“THAT’S NOT HOW WE DO THINGS HERE,” REALLY?!

So the gang sets out to find this Russian dude named Dominic. Now here’s where things got confusing, because I thought Dominic was the main Russian that Maria was working with, but then later it seems like Dominic is just a lackey and the main Russian is this bald guy who I believe is named Ivan or Dmitri, but could easily have any other generic Russian name you can think of.

After a few leads turn into dead ends, Huck finds Dominic and hauls him in, bound and gagged, then tosses his body onto the floor of Pope and Associates. Huck looks up at the group and announces, “Found him. He’s heavy,” and walks away. For future reference, should you ever need to deliver a body in the most badass way possible, this is it.

Eli gives Huck the order to torture the information out of Dominic as to where that bomb is hiding. But this is where Olivia steps in. “That’s not how we do things here,” she declares. Now this is a really weird thing for Olivia to say, because for three seasons this has been exactly how they do things there. The show could rather easily be renamed “Huck: Torturer” without changing any of the scenes. In fact, Huck does this so often that there was actually a storyline where he went to AA meetings because he thought they might help him treat his addiction to torturing people.

And I gotta say, if I were Olivia, I could think of better times to grow a conscience about this than when there’s the imminent threat of a presidential assassination.

“YOU ARE NEVER RECKLESS,” REALLY?!

As things roll on, Olivia continues to demonstrate that she apparently has never seen an episode of her own show (which is too bad because, according to the ads, you can watch all of Scandal Season 3 for free on ABC.com). First Lady Mellie Grant has asked the White House doctor for a paternity test for her child because she’s pretty sure her kid doesn’t belong to her husband, but rather to her husband’s father (seriously, if you don’t watch this show already, you need to start).

This is trouble, though, because the doctor apparently leaked this information to Grant’s challenger in the upcoming election, Sally Langston. An election that this episode keeps reminding us is only six days away. So now Olivia has come to chew out Mellie because she feels Mellie must have known the doctor would leak the information. “You’d have to be an idiot to be this reckless,” Olivia shouts. “And you are never reckless.”

It was at this point I wish I could have walked into the room and said, “Actually, I gotta stop you right there, Olivia.” Mellie is perhaps the most reckless character in this entire series. There are many examples of this, but my favorite is probably the time she got really pissed off and announced on live television that the President had had an affair.

Seriously, Olivia should buy some Scandal DVD’s and watch them this summer.

HOW IS HARRISON GOING ALONE?!

Harrison Wright, meanwhile, has been talking with his buddy on Wall Street who’s seen large sums of money trading hands. Harrison is pretty sure this money is being used by the terrorists because [insert explanation here because it is really not clear how he comes to this conclusion] and has also used his contact to figure out where the transactions are coming from.

So Harrison goes to a building that the producers for Scandal may or may not have ordered from a company called, “Generic-Bad-Guy-Lairs-R-Us.” There are those large turbine fans and oversized pipes in the background. The lighting is terrible. Unidentifiable things dangle from the walls. And there is just a random table in the middle of a room that is basically just filled with evidence.

Now, let me take a moment to say that there is probably no one on the show I would feel less confident sending to a bad guy lair to dig up evidence than Harrison. He has many talents– like dressing well and keeping his facial hair at the perfect length– but solo spy missions are not one of them. Meanwhile, at this moment, Olivia’s office is practically overflowing with super spies.

Anyway, you’re not going to believe this, but he finds photos of really crucial stuff, but before he can do anything about it someone walks out of the shadows and points a gun at his head.

THAT’S HOW YOU DEFEND A FUCKING TITLE BELT!

A few articles ago, I discussed this concept of a title belt for the creepiest couple on “Scandal.” A belt which belonged to Charlie and Quinn (AKA Quarlie) until it was stolen by Huck and Quinn (aka Quuck) a couple episodes ago. Now, as any fan of wrestling or boxing will tell you, there are two things that matter: winning the belt and defending the belt. Well, in this episode, Quinn and Huck defend their belt.

Huck confronts Quinn in a parking garage, where she stares him dead in the eye and demands to know, “What do you want?” Apparently she is what Huck wants, because he slams his mouth into hers at roughly 20 miles an hour and they suck face for about a second before she shoves him away and fires a blistering slap across his face. Over the next few moments, there is more slapping, a moment where Huck cups her face in his hand and crushes her cheeks together, more shouting and more mouths crashing into each other. At one point I wondered if maybe I had accidentally switched to the nature channel and these were just two wild animals going at it. Then, for good measure, HUCK SPITS ON QUINN’S NECK AND LICKS THE SALIVA OFF.

And that my friends is how you defend the fucking belt.

With the episode almost over, Jake discovers that the bomb is sitting in the basement of a church where a funeral service for a recently deceased US Senator is about to begin. A funeral that every government heavyweight, including the president, will be attending. Jake informs Cyrus who replies that he will have the church cleared immediately.

Then Cyrus hangs up the phone and the wheels start to turn. Sally Langston is already at the church. The president is still at the White House. If Cyrus can just keep the president here, Langston will be blown up and Fitz will march unchallenged into a second term. There’s really only one major plot hole in this plan which is that the bomb is set to go off in an hour and Jake will presumably realize at some point that the church is not being evacuated before that hour is up. But hey, it’s the end of the show, the finale is next week, and on “Scandal,” only one plot hole ain’t bad.

Always a pleasure to have Boston.com’s Perry Eaton in studio for a chat. After we talked a bit about Pearl Jam at Fenway and Perry’s new podcast, he filled us in on Game of Thrones live and Narragansett’s new Bananagrams-themed brew. END_OF_DOCUMENT_TOKEN_TO_BE_REPLACED

No, not from afar, from the comfort of her couch. From the actual awards themselves. That’s where Meredith Goldstein was for the Oscars. She shared all the juicy, first-hand details with me. END_OF_DOCUMENT_TOKEN_TO_BE_REPLACED

It was wonderful having our good friend Meredith Goldstein back in studio this morning. She dug into the latest edition of Love Letters, which prompted us to play this song. And of course we had to discuss the Oscars. Make sure you’re following Meredith on Twitter, as she’ll be live-tweeting the awards this Sunday night. END_OF_DOCUMENT_TOKEN_TO_BE_REPLACED

Our first edition of TV Sets for 2016 might be better than every edition from 2015. END_OF_DOCUMENT_TOKEN_TO_BE_REPLACED