Stuff I shout at the TV: Scandal – ‘Mama Said Knock You Out’ 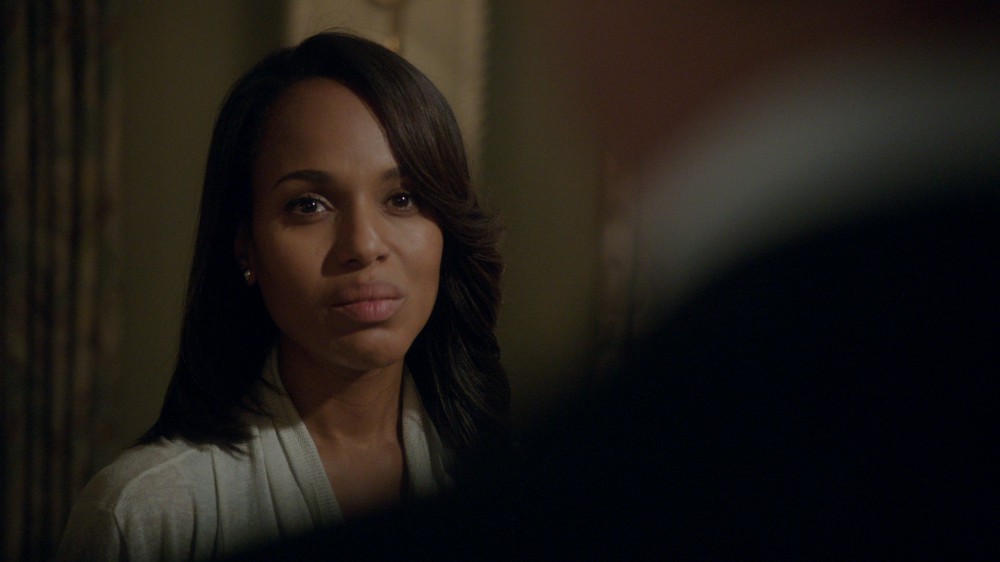 When last night’s episode of “Scandal,” titled “Mama Said Knock You Out,” opened, the president and his family were one hour away from a live TV interview with some guy named Noah who apparently had been given the character description of “total douche face.” Olivia Pope had come to tell Noah they needed to push the interview back and he had flipped out because who is the president to be pushing back an interview that’s been scheduled for two weeks? It seems a bit unfair because the answer to that question is, ya know, he’s the president of the United States, and sometimes stuff comes up last minute. But Douchey Doucherson isn’t budging. This interview is happening as scheduled, whether POTUS is ready or not. So the rest of the episode is about trying to get the family ready to go on live TV. Here are a few things it left me shouting at the television.

WOAH! INVEST IN SOME OPAQUE CURTAINS!

The interview hiccup is that President Fitz’s kids generally hate their dad. The daughter, Karen, is pissed that her father is cheating on her mother. And the son, Jerry, is angry at him because of… his policy on Syria?… I’m not totally sure. But Karen is about to find out that her father isn’t the only unfaithful one in the marriage when she catches her mom giving VP candidate Andrew last-name-withheld a BJ.

Mellie seems devastated that her daughter caught her, but she’s gotta take some of the blame on this one. Earlier in the episode, we saw Mellie and Andrew fooling around in her office. Then the camera pulled away and showed them going at it through a set of see-through curtains. Let me say that again. Through a set of see-through curtains. I assume this was meant to be a steamy camera angle or something, but all I could think was, “Who has an affair in a crowded building in front of translucent drapes?!” I mean, come on.

WHO EXACTLY IS IN CHARGE OF GUARDING THE DOOR TO THE OVAL OFFICE?

Fitz is in the Oval Office talking to super spy Jake Ballard when Chief of Staff Cyrus Beane wanders over to the secretary and asks who the president is meeting with. Upon hearing it’s the man who killed his husband, Cyrus flies into a fit of rage and storms into the Oval Office, because, as always, the secretary and Secret Service guy guarding the door NEVER STOP ANYONE FROM STORMING INTO THE OVAL OFFICE.

Cyrus, a guy who I would guess is in his sixties and not the best of shape, makes it right by the guards, grabs a vase, and charges at Jake. We all know what’s coming, because on TV, vases are never used to hold flowers and always used to smash over people’s heads or throw against walls. Unfortunately for him, this was kind of like that time Don Zimmer charged Pedro Martinez in the 2004 ALCS. Who’s going to win? The old guy who broadcasts his intentions by a mile, or the superb physical specimen a few decades his junior? (Spoiler alert: the superb physical specimen a few decades his junior).

AND THE TITLE BELT HAS BEEN STOLEN!

For several months now, Quinn and Charlie have held the championship belt for most-disturbing-on-screen-couple. But in an episode where the two of them hash out their relationship issues while torturing a naked man with a power drill, they are no match for the unstoppable force that is Huck and Quinn (or as their celebrity couple name would be, Quuck).

Here’s the resume for why Quuck should never happen: Huck ripped Quinn’s teeth out with a set of pliers. Pretty good resume.

But now Huck and Quinn meet up on a bridge where Huck tells her to come back to Olivia’s team. She points out that last week he wanted to kill her (oh yeah, that also goes on the resume), so what’s changed? In an angsty voice, he answers, “You know what’s changed.” Which I’m pretty sure was his way of saying that he’s in love with her. See, when he showed up to kill her, he slammed her up against the wall, then she spit in his face and apparently this was a total turn-on because they proceeded to make out for a few seconds. I mean, it’s not how I get in the mood, but sure.

So now Quinn proceeds to very slowly lick the side of Huck’s face. And the whole time I’m cringing because Huck perpetually has an I-haven’t-shaved-in-four-days level of stubble going and you’d have to imagine this is just one step shy of licking a cactus. Then she grabs Huck and pulls him in for some making out. Finally, she shoves him away, wipes his saliva off her lips, gives him a look of total disgust and stalks away.

The camera hangs on Huck, who seems to be more head-over-heels than ever.

Meanwhile, back in the first-family-interview-crisis storyline, Olivia tells Fitz about Jerry’s plans to sabotage the interview. Apparently, Jerry has been running a secret Twitter account trashing his dad and even bought a T-shirt endorsing the president’s democratic opponent, Governor Rustin, that he plans to wear during the interview. So Fitz barges into his son’s room and holds up the T-shirt. The son shouts, “Seriously? You’re searching through my stuff? What is this, North Korea?” which is such a delightfully teen-angsty line. Yes Jerry, North Korea sends political dissidents and their families to labor camps where they torture and kill them, but I’d say your dad looking through your suitcase comes pretty close.

Fitz fires back, “What, are you gonna tweet about it?” Good one, Fitz. “This little stunt of yours is over.”

That, as far as we know, is the entire argument.

Then later, Fitz walks into a room where Olivia is talking with Jerry and Karen, and discovers that his son is still planning to slam him on national television. He seems shocked, like this totally blindsided him. Didn’t he expertly solve this problem when he told his kid not to slam him on national television? Fitz says, “Is this more of your political crap? I thought we put that to bed.” First of all, given the pileup of extramarital affairs at the center of these family issues, “put this to bed” is kind of a poor choice of words. But second, when did you solve this? When you told him he couldn’t wear the T-shirt. Yup Fitz, that’s how teenagers work. Once you tell them they can’t do something, they say to themselves, “Well, my hands are tied, I guess I’ll go back to being well-behaved.”

But ultimately, the family issues are resolved at, you’re not going to believe this, the absolute last minute. Well, we can’t be positive they are, because the show cuts to credits before the interview. But there’s a conciliatory tone in the air as it does. I guess we’ll have to tune in next week to find out for sure.

Always a pleasure to have Boston.com’s Perry Eaton in studio for a chat. After we talked a bit about Pearl Jam at Fenway and Perry’s new podcast, he filled us in on Game of Thrones live and Narragansett’s new Bananagrams-themed brew. END_OF_DOCUMENT_TOKEN_TO_BE_REPLACED

No, not from afar, from the comfort of her couch. From the actual awards themselves. That’s where Meredith Goldstein was for the Oscars. She shared all the juicy, first-hand details with me. END_OF_DOCUMENT_TOKEN_TO_BE_REPLACED

It was wonderful having our good friend Meredith Goldstein back in studio this morning. She dug into the latest edition of Love Letters, which prompted us to play this song. And of course we had to discuss the Oscars. Make sure you’re following Meredith on Twitter, as she’ll be live-tweeting the awards this Sunday night. END_OF_DOCUMENT_TOKEN_TO_BE_REPLACED

Our first edition of TV Sets for 2016 might be better than every edition from 2015. END_OF_DOCUMENT_TOKEN_TO_BE_REPLACED