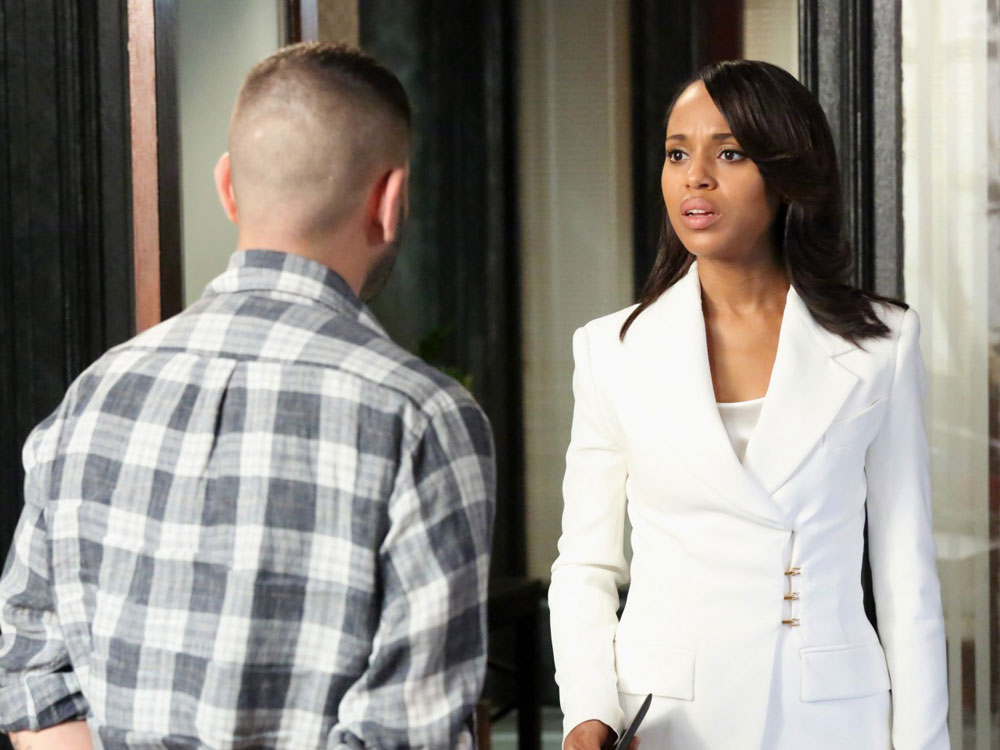 Stuff I Shout at the TV is a column about the things that drive me nuts on shows that I watch — and “Scandal” is the perfect fit. It’s the kind of television series where people get their teeth ripped out one minute and then a few scenes later, make-out like it’s no big deal. It’s full of moments that are crazy and absurd, and it’s fun because it’s crazy and absurd. Aside from saying “ow” a bunch of times, here are a few more things last night’s episode (yes, it’s titled “YOLO”) made me shout at the TV.

It’s possible that the opening scene — in which Huck was maniacally preparing to rip Quinn’s teeth out of the gums with a set of pliers — struck me as particularly terrifying because I had just had a wisdom tooth extracted two days earlier, and this was giving me ‘Nam-style flashbacks. Or maybe it’s just terrifying to watch someone maniacally preparing to rip someone else’s teeth out of their gums with a set of pliers no matter what the context.

But it was all I could think about later that episode when Charlie discovered Quinn bound and gagged, her mouth bleeding profusely from two painfully-removed molars. Over the course of the last couple episodes, Charlie had seduced Quinn, set her up for murder, and forced her to spy on and sabotage her friends. So, of course, they started making out. If you don’t watch the show, allow me to explain that on “Scandal,” people make-out with people who fucked up their lives a lot. In fact, life destruction is probably the cast’s primary seduction technique.

And as they kissed, my body tensed and I found myself shouting in pain, because even two days out of surgery, the idea of kissing someone sounds insanely painful. Worse yet, Charlie kissed like he was an actor in a 1950’s movie. The kind of kiss where you shove your entire face into the other person’s, in a move that an outside observer might mistake for attempted suffocation.

“How are you not stressed out by all this?!”

Perhaps the strangest character in last night’s episode was Olivia Pope’s mother. After escaping from a prison cell where she had spent the last 22 years, she was now on the run from the man heading the most powerful, ruthless spy agency on the planet. A man who just happened to be her husband. She had a tracking device extracted from her neck with a knife, and she was seeing her daughter for the first time in decades. Yet her general disposition could best be described as, “Eh. What else ya got?” She carried herself like someone flipping channels because it’s 8:50 p.m. and the show she wants to watch isn’t on until 9 p.m.

She spent most of the time just kind of chilling and saying things to Olivia like, “There just doesn’t seem to be a lot of laughter in your life.” Which seemed kind of unfair. I mean, isn’t it possible that Olivia laughs plenty and it’s just that the day she is being hunted by her own murderous father isn’t quite the nonstop laugh riot you might expect?

“You’re in the halls of the White House!!”

Somewhere midway through this episode, it dawned on the vice president’s husband, Daniel Douglas, that the affair he had the other night with writer James Novak (the one that revealed him to be gay and an adulterer to a journalist) could impact his political career. So he confronted James and demanded the affair remain a secret.

Where did he have this important confrontation? In the fucking middle of the White House, of course. The very open and populated halls of 1600 Pennsylvania Ave. are a common choice on the show for where to confront other people about major secrets. Daniel grabbed James and pulled him off to the side of the hallway and shouted at him (as everyone does in this situation). Because, as you know, passersby can only overhear people in the middle of hallways, not those close to walls.

In having intercourse with Daniel, James had committed adultery, as well. His husband, Cyrus Beane, had encouraged James to interview Daniel in his home, while drinking alcohol and wearing a V-neck sweater (irresistible to the gay male, apparently) in the hopes that Daniel would hit on James and Cyrus could then use this as a political chip to deter the vice president from running against the president in the upcoming election. I know it sounds like a disgusting way to treat your partner, but I mean, considering that Cyrus once had a hit put out on James, it just didn’t seem so bad.

Seriously, if you don’t watch this show, you should start.

But James, who spends most of the series alternating between saying, “I’m not as dumb as you think, Cy,” and being roughly as dumb as Cyrus thinks, put it all together. He then spent most of the episode speaking to Cyrus in delightfully hostile innuendos like saying how he got Douglas to “go deep” during the interview.

But eventually, as James sat typing on the bed, Cyrus confronted him about the affair. James responded with a pretty great “fuck you” speech, punctuated by asking Cyrus if he wanted to see the Daniel Douglas column. He then turned around the computer screen, revealing the phrase “I WANT A DIVORCE” written over and over, Jack Nicholson in “The Shining”-style. And I know we were supposed to be moved by that moment, but all I could think was, “Wait, did he type the phrase 50 times, or did he just use the copy-and-paste command a bunch?”

In an attempt to block Olivia’s mother from fleeing the country, her father put the mom on the FBI’s no-fly list under the name Marie Wallace. If you watch the show, you know that any time Olivia’s team runs into trouble with the law, Abby visits her boyfriend, US Attorney David Rosen, and asks him to bend the rules of the US legal system. And this episode was no exception. It’s too bad because there used to be a time she would do normal girlfriend stuff, like bang him on the living room floor and then leave the apartment immediately thereafter. But at this point, all the romance is gone.

After Charlie and Quinn made-out and presumably had some very unpleasant sex, the two marched through the street to a meeting as Quinn used some spy terms like “triangulate a signal” and “smoke ’em out,” which clearly got Charlie pretty aroused. “You are seriously the best girlfriend I’ve ever had,” he said, then shoved his face into hers. And in an episode with super spies on the run from more super spies and unenthusiastic prison escapees, this seemed a little too unrealistic. I mean, they sleep together one time and now they’re boyfriend-girlfriend? I dunno, it just seems kind of fast.

As the show drew to a close, Olivia’s mother sat on a private plane taxiing up the runway. And only at that moment did Olivia finally realize that her mom was the bad guy. Just as we reached the it’s-too-late-to-stop-the-plane point, she had a flashback to someone calling her house 22 years ago and asking if Marie was there. Marie! The same name that her father used when he placed the mother on the no-fly list. And, I mean, this really doesn’t prove anything because her mother having the same name that Olivia’s father used could have any number of explanations that don’t mean the woman is a terrorist, but — oh fuck it, I guess she’s a terrorist.

But this was not the whoa moment. The whoa moment came next when we found the vice president standing over her husband’s bloodied body, talking to Cyrus on the phone and telling him, “I’ve committed a sin.”

And then I was shouting at the TV because it was going to be seven more days before I knew what happened next. And waiting that long for my next fix of “Scandal” would be painful.

Always a pleasure to have Boston.com’s Perry Eaton in studio for a chat. After we talked a bit about Pearl Jam at Fenway and Perry’s new podcast, he filled us in on Game of Thrones live and Narragansett’s new Bananagrams-themed brew. END_OF_DOCUMENT_TOKEN_TO_BE_REPLACED

No, not from afar, from the comfort of her couch. From the actual awards themselves. That’s where Meredith Goldstein was for the Oscars. She shared all the juicy, first-hand details with me. END_OF_DOCUMENT_TOKEN_TO_BE_REPLACED

It was wonderful having our good friend Meredith Goldstein back in studio this morning. She dug into the latest edition of Love Letters, which prompted us to play this song. And of course we had to discuss the Oscars. Make sure you’re following Meredith on Twitter, as she’ll be live-tweeting the awards this Sunday night. END_OF_DOCUMENT_TOKEN_TO_BE_REPLACED

Our first edition of TV Sets for 2016 might be better than every edition from 2015. END_OF_DOCUMENT_TOKEN_TO_BE_REPLACED