Stuff I Shout at the Television: ‘Scandal’ recap – ‘The Price of Free and Fair Elections’ 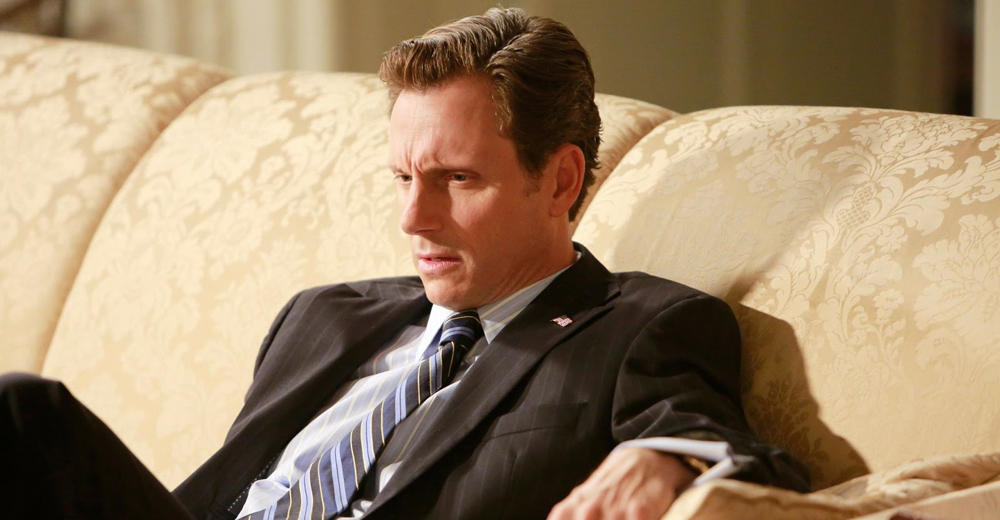 There’s a bomb in the basement of the church.

Cyrus Beane gets a phone call warning him about the imminent explosion and the need to evacuate the building, and the wheels start to turn in his head. The president is in the Oval Office, but his opponent in the upcoming election– Sally Langston– is in that very church along with a few hundred other people. If Cyrus does nothing, she’ll die and President Fitz will stroll into his second term unchallenged.

So Cyrus sits beside the president, hoping to stall until the clock runs out. We watch as the timer on the bomb starts. 60 minutes. 59:59 (as with all bombs on all shows, the timer is a giant red digital clock which makes it brutally clear exactly when the bomb will go off, just in case anyone finds it and is curious how long they have). 59:56. Cut to credits. This is the end of last week’s episode and the note we start on at the beginning of “Scandal’s” season finale, titled “The Price of Free and Fair Elections.” Here’s what happened next, as well as a few things the episode left me shouting at the television.

HOW DID JAKE EVER MAKE IT TO THE RANK OF UBER SPY?!

So okay, imagine you’re Jake Ballard– the guy who called Cyrus to warn him about the bomb. There are TV cameras outside the cathedral depicting a church that noticeably does not have people running from it, shitting their pants and screaming, “BOOOMMMMBBB. EVERYONE RUN, IT’S A FUCKING BOMB!!” I mean, at some point it occurs to you that the building is not being evacuated, right?

Meanwhile, Cyrus has the power to have that building cleared in moments. And he also has no idea there’s a full hour left on the bomb, so if he’s going through his to-do list, he should probably move “save the lives of hundreds of innocents” all the way to the top. Meanwhile, if you know Cyrus and you see this happening, it’s pretty easy to figure out why. Killing people so Fitz can remain president is kind of Cyrus’ thing.

But when the show starts, there are only 14 minutes left on the bomb and Jake paces in his office trying in vain to get in touch with Cyrus and ask what the hell is going on. Let me say that again in capital letters for dramatic effect because it’s one of the things I like to do again and again in this column: OVER 46 MINUTES HAVE PASSED WITHOUT THE BUILDING BEING CLEARED AND JAKE STILL THINKS THAT CYRUS IS THE RIGHT GUY TO FIX THIS PROBLEM.

So finally, Jake decides to contact Fitz directly. Does he call the president’s cell phone number, which we know he has? Does he contact the operative we know he was working inside the White House? Nope, he decides to take the time to physically go to the White House himself AS A TICKING TIME BOMB IS ON ITS WAY TO DETONATING IN THE BASEMENT OF A BUILDING. I mean, for crying out loud, how does he even know the president will be there when he arrives?

By the way, Jake isn’t some regular shmoe. He’s the head of B-613, the most powerful spy agency on the planet. I mean, presumably he has some critical thinking skills, right?

So Jake barges into the Oval Office just in time, because, as we have seen before, there is nobody ever stopping anybody from barging into the Oval Office. The building is evacuated, and as the last people clear the cathedral steps, an explosion lets loose and those last few people fly forward with the force of the blast, because the last few people running from any explosion on any show ever always just barely make it as they fly forward with the force of the blast.

I mean, think about it. If Jake had hit traffic at Dupont circle, those people would have died.

HOW SLOW DOES FITZ’S BRAIN MOVE?!

But Jake isn’t the only mental lightweight on the show. There’s also the president himself. Moments after the explosion, Sally, clothes tattered and face covered in soot, ran back to the wounded to provide medical care on national television. You may recall that the president was already trailing in the polls. After all, he was an incumbent running against a third-party independent female candidate with fringe political views that was trying to mobilize a conservative base despite being pro-choice, so I mean, it totally made sense. But now, with the election days away, she has heroically run back towards danger to save bombing victims on live TV. He’s fucked.

The entire team stands in the Oval Office, their faces resigned to defeat except for Fitz who doesn’t get it. “Over?” he shouts. “The polls this afternoon had us in striking distance!” he says, dumbfounded about how the polls could have changed between when he last saw them and when his opponent did something heroic and inspiring as the nation watched. So the president comes up with the brilliant idea of giving speeches in key swing states, before Olivia breaks the news to him that he’s going to lose. And Fitz, utterly bewildered, looks at the camera and says, “I’m gonna lose?” President of the United States and the guy can’t figure this out? Really?

So it’s over. Fitz is just going through the motions, giving a campaign speech in Virginia when all of a sudden, his son starts bleeding from the nose, then drops to the ground and dies. As Fitz stands in the hospital where the doctors were unable to save his kid, a secret service agent comes up to him (the one that worked for Jake and is with the president all the fucking time that Jake totally could have texted back during that whole bomb scare thing, but whatever) and explains that Fitz’s son was likely killed by a small dose of a lethal chemical agent.

The president is again bewildered as he asks, “My son was murdered?” Just to recap, Fitz’s son (who, as far as we know, has never, before now, had a seizure) has a seizure and dies. This happens days after a failed assassination attempt on the president’s life by a super terrorist who is still at large because once that bomb went off everyone completely stopped trying to find her. Also, Fitz may not realize this, but he lives on a TV show where absolutely no one dies of natural causes. Where an average of 1.2 people die per episode and those deaths are always murder. I think there was a guy in season one who died of natural causes (allegedly) and that’s it. How is this the first time he has considered the possibility of foul play?

And as the show winds down, Harrison Wright uncovers something huge. The president’s son wasn’t killed by the terrorist, he was killed by Eli Pope, the former head of B-613 and the guy who realized that if the president thought it was the super terrorist who committed the murder, and if Eli could kill said super terrorist, then the president would give Eli his job back. And I just want to say I totally called it. Like several columns ago, when Eli promised Olivia he wouldn’t hurt a hair on the president’s head which she took to mean he wouldn’t do anything bad, but I took to mean he would do something bad, he would just leave the president’s hair unscathed. And I know you couldn’t care less, but this is a really big deal for me because I am the guy at the movies who never has any clue what’s going on. Who’s always turning to his friends and saying, “Wait, is that the same guy we saw in the last scene or someone different who looks like him?” or “Oh, that’s his daughter? I thought that was his girlfriend.”

Anyway, some other stuff happens at the end. There is a scene where it looks like Harrison gets killed, but it doesn’t actually happen onscreen so we’re not sure. Olivia gets on a plane and flies away to start a new life with Jake. Huck goes to talk to his wife and child that he hadn’t seen in about a decade. The super terrorist we were told was dead turns out to not be dead. US Attorney David Rosen gets a ton of evidence which should help him put away bad guys, though as we know from past experience, when David gets incriminating evidence he can use to put away bad guys, it never works out. Fitz wins the election because, in the hearts of voters, dead son trumps risking your life to save bomb victims. And, oh yeah, we’re not positive if there’ll be a season four because ABC somehow still hasn’t renewed the show for next year.

But I want to emphasize guys, the key takeaway from all this is that I called it.