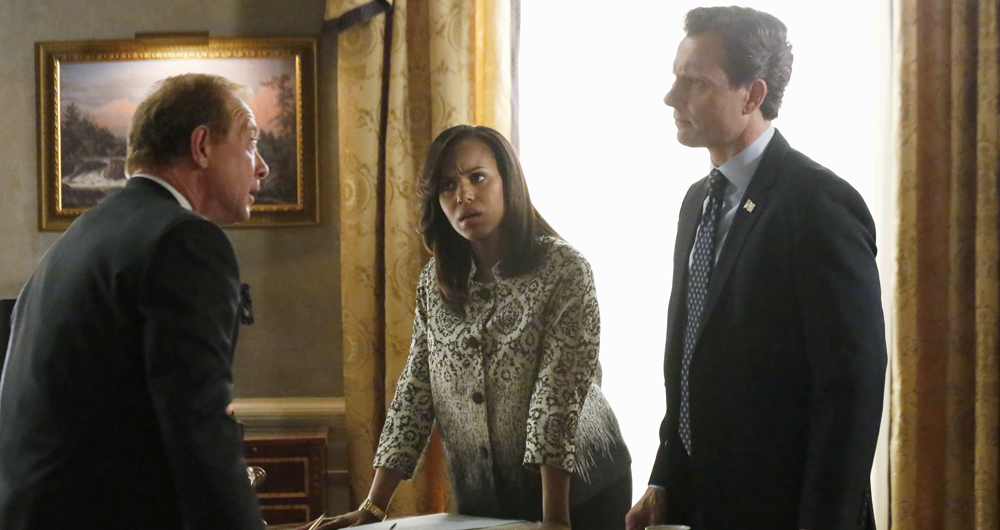 Denial. It’s the first step of the grieving process.

Last week’s episode of “Scandal” ended with the camera trained on Jake Ballard as he fired a bullet into the head of either US Attorney David Rosen or White House Press Secretary James Novak, but cut to black before we knew whose head. Because we never actually saw them die, I’ve spent the last week telling myself that maybe they both survived. That maybe it was a camera trick and they’re going to make it.

But that’s not how this works. A few moments into the latest episode of “Scandal,” titled “Kiss Kiss Bang Bang,” James was dead.

Here are a few things that happened next, as well as what last night’s show left me shouting at the television.

Meanwhile, First Lady Mellie Grant, the show’s most attractive woman (and one of it’s three hottest characters overall), has spent the last three years just standing on the sidelines, boinking absolutely nobody. It’s like a baseball team keeping their best hitter on the bench. But this week, Mellie finally gets in the game.

In arguably the most realistic moment in the show’s history, the immediate discussion at the White House in the fallout of a senseless murder is how to capitalize on this tragedy and turn it into a debate about gun control. The president decides to cozy up to the NRA (don’t worry, he eventually changes course and comes out as anti-gun because this Republican president is THE MOST LIBERAL PRESIDENT EVER) by sending his VP candidate Andrew “still-hasn’t-been-given-a-last-name” and Mellie to chat with the gun lobbyists.

After a few scenes of her looking hot and playful in hunting gear and firing a shotgun during target practice, she and Andrew drink heavily and debate gun policy (ladies, if you’re curious, every one of these is a turn on. Like, every single one of these), before the two of them make out and we see some purple underwear she’s wearing. It’s really all I’ve ever asked for from the show.

By the way, if you’re curious, that list of the three sexiest characters on “Scandal” is: 1) Jake Ballard 2) Mellie Grant, and 3) Jake Ballard’s abs.

And if you want to go further down the list: 5) Andrew last-name-withheld. 46) Harrison Wright’s ties. 224) Charlie.

Meanwhile, Olivia is coming apart at the seams. That whole thing where every couple of months someone she knows either murders someone or gets murdered seems to finally be catching up with her. She asks her father, what’s the point of it all? If everyone she loves is a monster and no one is good, then why are we doing all this? Which really could have easily been a note producers got from test audiences about the last couple months of the show, because I’ve been starting to wonder the same thing.

Her father then tells her to cheer up. He’s responsible for 183 people dying.

If those seem like totally disjointed concepts, and the worst cheer-up speech imaginable, then I’m with you. But that’s really how it went. He then talks about how he’s racked with guilt and it’s awful, and I think he tries to make some bigger point, about there being good in everyone, even the monsters, but I seriously can’t understand it.

It’s possibly because I’m spending most of the time thinking about that number. 183. It’s supposed to be staggeringly large, but when you run the math, it actually seems pretty small. The guy has spent over two decades as head of B-613, a spy agency whose sole purpose is murdering people. I would have ballparked the number at something like 500. But 183 dead people? That’s less than nine a year. I mean, I gotta say, that’s not half bad.

Like Olivia, David Rosen is breaking down. Jake has given him someone to arrest for James’ murder, but David can’t do it. He can’t send someone else to prison for the crimes Jake committed. So Olivia meets with David to tell him she is going to take down B-613 and she needs his help, and if he doesn’t send this guy away, then David will end up dead and unable to help her. She lectures him about this need to let one injustice go for what will ultimately be the greater good. Oh, by the way, this is all happening at the oh-so-subtle location choice of the steps to the Lincoln monument.

“Lose this battle, so we can win the war,” she tells him. Then the camera cuts to a long-distance shot of the two of them sitting on the steps with the Lincoln Monument looming gigantically over both of them and set into relief by flood lights. I assume the producers decided that hiring an airplane to skywrite the word “SYMBOLISM” in the background was too expensive, otherwise they would have done that too.

This entire episode is about characters crumbling. Olivia Pope. David Rosen. But most of all, James’ now former husband (or is it boyfriend? How do I watch this show every week and not know if they’re married?) Cyrus is crumbling over the death of his lover.

It’s time for the White House to make an announcement about the man David has arrested. This is unfortunate because the woman who took over for James as press secretary is really bad at what I’m pretty sure is the only thing a press secretary has to do: talking to a room full of reporters. So Cyrus decides to be the one to tell the media. He starts talking, but then breaks down sobbing. Everything comes pouring out of him. The president hugs him and walks him away and, yes, I admit it, I started crying.

The show ends by taking us back to the moment after Jake shot James and James lay dying in the street. Jake tells him that he’s sorry. That he will sit with James until he dies. That James’ daughter will be taken care of. And on a show where we’ve spent the last few months thinking the same thoughts as Olivia– that everyone is awful– we are reminded that they are also humans and there is good in everyone. Even the monsters.

Always a pleasure to have Boston.com’s Perry Eaton in studio for a chat. After we talked a bit about Pearl Jam at Fenway and Perry’s new podcast, he filled us in on Game of Thrones live and Narragansett’s new Bananagrams-themed brew. END_OF_DOCUMENT_TOKEN_TO_BE_REPLACED

No, not from afar, from the comfort of her couch. From the actual awards themselves. That’s where Meredith Goldstein was for the Oscars. She shared all the juicy, first-hand details with me. END_OF_DOCUMENT_TOKEN_TO_BE_REPLACED

It was wonderful having our good friend Meredith Goldstein back in studio this morning. She dug into the latest edition of Love Letters, which prompted us to play this song. And of course we had to discuss the Oscars. Make sure you’re following Meredith on Twitter, as she’ll be live-tweeting the awards this Sunday night. END_OF_DOCUMENT_TOKEN_TO_BE_REPLACED

Our first edition of TV Sets for 2016 might be better than every edition from 2015. END_OF_DOCUMENT_TOKEN_TO_BE_REPLACED