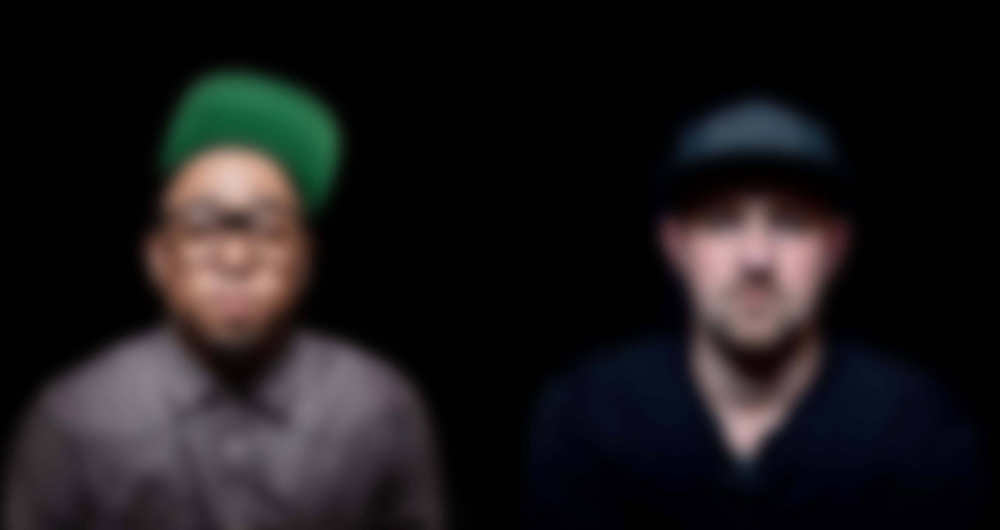 “I’m more of a hugger,” Moe Pope remarks as he stretches his arms out to greet me in lieu of a handshake. The proudly Boston-based MC, donning a black and white Jimi Hendrix tee paired with oversized camouflage shorts, guides me to The Bridge Sound and Stage to conduct our interview. The reason for his overt warmth: my tardiness.

Upon entrance to the studio, he cracks a smile and makes a confession of his own. “I’m late, too.” The Arcitype, also known as the other half of STL GLD, is inside waiting for us. He is plainly dressed in a black shirt and dark jeans, his eyes glued to a laptop. After the two touch base on a few details regarding their release show this Friday, August 15 at Brighton Music Hall, they are ready to begin.

In between sips of water (there was no beer left in the studio fridge), Pope addresses any tentative nervousness surrounding STL GLD’s debut album “My Monday Morning Music” that dropped earlier this week.

“It’s definitely something different. I’ve been doing music with Rain for the last couple of years. I’ve switched gears a bunch of times while I’ve been here. I was with this one group, I’ve been with two other groups, I did a record with this guy Headnotic, and then I met Rain. So yeah–I’m a little nervous. Who knows how people will receive this?”

Arc initially balks at the question, but his response elicits deep insight. “What goes hand in hand with that is the fact that Moe and I took our time on this project. It took a lot longer than we expected it to. The album kind of started in one direction and then shifted halfway through because of a couple of songs we made. That changed the tone of the record.” As he starts to veer off course, he regains his train of thought. “We feel good about it, and if we feel proud of it then we can fall back on our confidence when it comes to the nerves and usual pre-release jitters.”

“My Monday Morning Music” isn’t just another Moe Pope collaboration record–it’s the two-time Boston Music Award winner’s subterranean growl against soft-bellied complacency. The man refuses to artistically repeat himself. Bringing The Arcitype to the forefront of the album was a strategic move, even though the two have worked together before.

“Not to confuse anyone, but I’ve always switched [my style]. I don’t like to get comfortable with a certain sound. I like to try different things and give myself a challenge. This record feels like something I haven’t done yet in my whole career. This sound is something I’ve never done. But me and Rain are still making music,” Pope eagerly confirms. “We have another record we’re making now, and I’ll never stop making music with him. But he’s working with other cats, too. He’s doing good things.”

If anything, Pope and Arc have nothing but respect for each other. “I was psyched to come on board (for “MMMM”). I’ve been a fan of Moe’s for a long time. I bought “Life After God” and I was really into it. I’d been a fan of Mission and the project he had done with Megaphone, with Headnotic,” the producer explains. “From day one, I was familiar with his work before ever getting a chance to work with him.  “Let The Right Ones In”…I mixed that project and did two songs on it and that was kind of the beginning of our working relationship. It felt like a natural progression for us.”

Although The Arcitype has worked with other artists like Ruste Juxx, Dominik Omega, and Carolina Black in a similar format, he contends that his partnership with Pope shines in a very distinct way. “With Moe, I got a completely different sound than anything I’ve done with those guys. We sit here and make things from the ground up–we don’t do any samples. We really create our own sound and image and draw from my musical background and his musical background. We can pull influences together and make them all collide into one place. It’s a lot of fun.”

The actual recording of the new record proved to be a cathartic experience of sorts. “While we were mixing ‘Let The Right Ones In,’ we had just started diving into this record,” Pope recalls. “We were about four or five songs deep, and I thought it was good because I just wanted to rap. I wanted to have fun. The making of (‘Right Ones’) was a lot of hardships. There were a lot of changes in me and Rain’s life going on. I didn’t want to write heavy songs. I wanted to get back to the core of hip-hop that I loved growing up on.” He trips over his own pensiveness. “But I think as a writer, if you feel it you got to do it. That’s when the album changed and that’s when we started hitting our stride.” Arc follows suit on this sentiment. “Generally speaking, the making of this album was pretty fun and laid back. I don’t think that there were too many super stressful parts about it. The stress and tension came when picking the tracks that were going to be on the album.” A fraction of a smirk dances across his face. “But that’s just logistics–there’s always going to be some sort of give and take.”

The end result from such arduous decision making is a record that exceeded anyone’s expectations. In Pope’s signature style, “Music” has no shortage of guests (Tea Leigh, Dua Boakye of Bad Rabbits, Dutch Rebelle), bold proclamations, and hardbitten lyrics that are fraught but uplifting. His congeniality and crisp delivery make for a sumptuous sound amidst a genre of music that is often considered barbaric and downright unlistenable. Understandably, this misconception about rap takes all but two seconds to seep under Pope’s skin. “There’s no one that grew up in this era who hasn’t been influenced by hip-hop and I like to prove that through all of my collaborations. To turn your nose up at it is just disrespectful. This is black music at its core–it just transcends everything.”

Not that Pope’s personal taste in music consists solely of rap. He goes on to rave about Joni Mitchell’s brilliance and Beck’s newest album that The Arcitype isn’t too fond of (even though both claim to be a huge fan of all of his work). But even he can’t disagree with Pope’s assessment of how hip-hop has become unfairly discarded. “There comes a point where people write it off and it’s written off forever–until someone sits them down and proves them wrong.” Soon, he becomes genuinely baffled by this notion. “There’s a song on ‘My Monday Morning Music’ that is six minutes long and Moe only raps for a minute on it. So what happens to the other five minutes? Music!” he exclaims. “It’s not just void. There’s a whole band playing essentially–it goes on this musical journey. So it’s incredibly frustrating when someone is unwilling to look a little deeper into it.”

What “Music” aims to celebrate isn’t just the meeting of two great minds. It cements the fact that STL GLD’s union is rooted in both innovation and knowledge. “At the end of the day, in order to be a hip-hop artist–a really, really good hip-hop artist–you have to know a lot about music. Not just pop culture, but music period,” Pope declares. The smile that briefly adorned Arc’s face earlier makes it long-awaited return as he adds: “And the best ones always do.”

Perry Eaton writes for Boston.com. Perry Eaton talks on the radio with me from time to time. Today, he talked to me about what he’s been listening to and some upcoming shows and festivals worth checking out. Click here to read more. END_OF_DOCUMENT_TOKEN_TO_BE_REPLACED

In some ways, Palehound has always had a home in Boston. END_OF_DOCUMENT_TOKEN_TO_BE_REPLACED

Kal Marks is the kind of band that sneaks up on you. Whether you’re experiencing them at some basement show in Allston, or in an opening set for Pile at Great Scott, you may not see them coming, but they’ll immediately click. The combination of heavy sludgy riffs and lead singer Carl Shane’s unique crooning bowls you over. It’s dark and it’s compelling, but most importantly, it’s really earnest. END_OF_DOCUMENT_TOKEN_TO_BE_REPLACED

It’s not very often that some of the most talented performers in Boston are set to grace the same stage in a single night. This Sunday marks the 1 year anniversary of Mind Spray, a local hip-hop open mic and showcase series devised by promotion and booking company The Brain Trust. END_OF_DOCUMENT_TOKEN_TO_BE_REPLACED

There’s been a lot written about Street Dogs evicting a group of neo-Nazis from the pit at their House of Blues, Anaheim show on St. Patrick’s Day. You don’t need to read any of it. Just listen to front man Mike McColgan tell the story. He talks about joining his old band, Dropkick Murphys, on stage in Boston last week, too. END_OF_DOCUMENT_TOKEN_TO_BE_REPLACED

It’s not her best. END_OF_DOCUMENT_TOKEN_TO_BE_REPLACED

When in Nashville, do as the locals do. Since relocating to Tennessee a few months ago, this seems to have been Steven Tyler of Aerosmith’s approach after announcing in an October Twitter Q&A session that he intended to record a country album, an endeavor he’s well in the process of completing. END_OF_DOCUMENT_TOKEN_TO_BE_REPLACED

“I’m Shipping Up To Boston” just turned ten years old. Boston.com’s Matt Juul put this piece together on the history and significance of the Dropkick Murphys song, then joined me in studio to talk about it. END_OF_DOCUMENT_TOKEN_TO_BE_REPLACED

Boston is a city known for it’s Irish heritage, and it’s celebration of it. Two main traditions have held strong in Boston: the St. Patrick’s Day Breakfast and subsequent Parade. But I argue there is a third now: seeing the Dropkick Murphys at the House of Blues during their multi-night March Residency. END_OF_DOCUMENT_TOKEN_TO_BE_REPLACED

Sure, you might see a punk show on Monday and a chillwave band on Thursday and so on, but usually you favor one sound over another because you’re a busy bee and time is honey. It’s been the same for years, and the Prefab Messiahs can vouch. END_OF_DOCUMENT_TOKEN_TO_BE_REPLACED