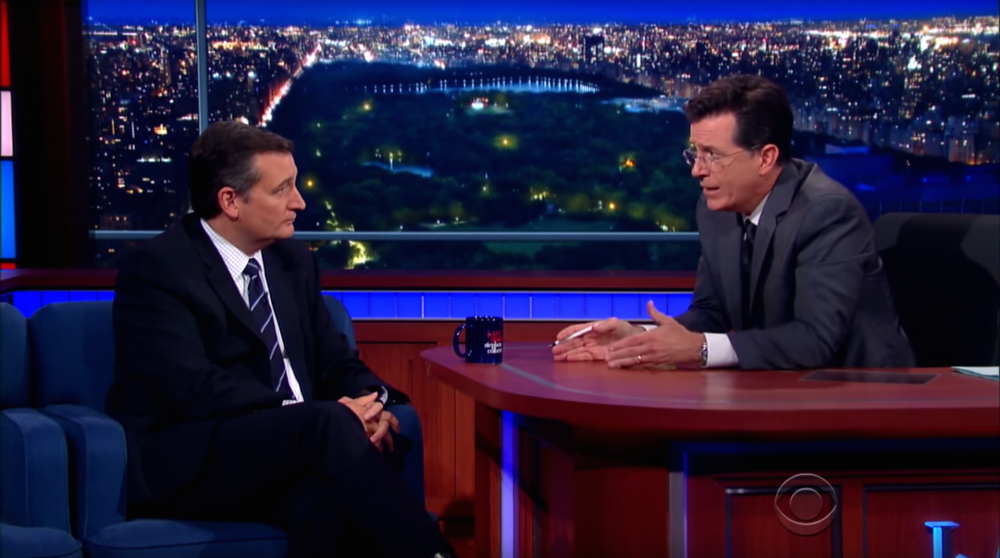 Republican presidential candidate and Texas Sen. Ted Cruz appeared on The Late Show with Stephen Colbert last night to discuss a variety of topics, including whether Ronald Reagan would stand a chance in today’s Republican party, Cruz’s ability to work with others, and the June Supreme Court decision allowing gay marriage nationwide.

TONIGHT: Will join @StephenAtHome on CBS's @colbertlateshow​. Tune in at 11:35 pm ET and tell your friends! pic.twitter.com/atdYTgmrHY

“Reagan raised taxes,” Colbert said to Cruz. “Reagan actually had an amnesty program for illegal immigrants. Neither of those things would allow Reagan to be nominated today. To what level can you truly emulate Ronald Reagan?”

Cruz seemingly tried to steer the conversation toward President Obama, but when Colbert pressed the issue, asking Cruz if he could agree with Reagan on raising taxes and granting amnesty, Cruz said, “No, of course not.”

As the interview continued, Colbert asked Cruz if he would be able to compromise like Reagan did, raising taxes after initially cutting them and reaching across the aisle to work with former Speaker of the House and Massachusetts Representative Thomas “Tip” O’Neill. Cruz is not known for his compromising ability, playing a large role in the government shutdown of 2013 and leading a current charge among Tea Party congressmen to force another shutdown unless the spending bill due October 1 defunds Planned Parenthood.

Instead of talking compromise, Cruz spoke about his own favorite c-word: Constitution.

“Listen, what I’m fighting for are simple principles,” Cruz said. “Live within our means, stop bankrupting our kids and grandkids, follow the Constitution.”

“Well, no, actually, let’s be precise,” Cruz retorted. “Under the Constitution, marriage is a question for the states.”

“It doesn’t mention marriage in the Constitution,” Colbert replied.

Watch the full interview below.