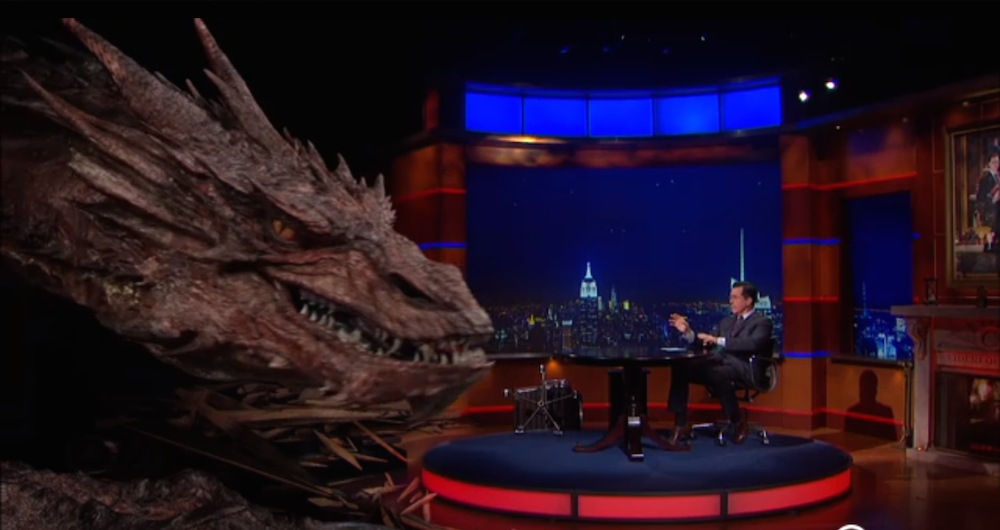 The last episode of Comedy Central’s “The Colbert Report” will air next Friday, December 18. In the meantime, Colbert has pulled out all the stops for celebrity guests, including an appearance by President Obama earlier this week, and a goddamn dragon this week.

Specifically, Smaug from “The Hobbit,” voiced by English actor and winner of the Most British Name Ever Award Benedict Cumberbatch, crashed through a CGI wall for a seven-minute chat with Colbert last night. Topics included their similarities (“We’re both fiscal conseravtives who sleep on giant piles of money”), who Smaug was supporting in for the US presidential election (“Ran Paul 2016! Yeah! Get some, Rand!”), and Smaug’s opinion on why he is sometimes considered the bad guy (“Typical liberal Hollywood bias.”)

Yes, this was a gimmick to promote the upcoming film “The Hobbit: The Battle of the Five Armies,” but it’s not every day you get to see a mythical creature interviewed on television. Next week Colbert might have a unicorn, or a Fox News host with a soul.

Golden Globe and Emmy nominee Benjamin Wallfisch is the composer responsible for the score of the hit movie IT. I talked to Ben about his approach to scoring the new version of this iconic story and his thoughts on film and music overall. Some very insightful commentary; listen in. END_OF_DOCUMENT_TOKEN_TO_BE_REPLACED

Rupert Gregson-Williams is an award-winning film composer. He just so happened to compose the score for this summer’s big blockbuster Wonder Woman. We talked about his beginnings in film scoring, film scores that move and inspire him and, of course, Wonder Woman. END_OF_DOCUMENT_TOKEN_TO_BE_REPLACED

Jeff Rapsis is a New England-based composer and performer. Lately, he’s been creating live musical scores for silent film screenings. I talked to him about his process and a few of his upcoming performances at The Capitol Theatre in Arlington and the Somerville Theatre. You can keep track of where else Jeff is scoring silent films here. END_OF_DOCUMENT_TOKEN_TO_BE_REPLACED

Planning on seeing Rogue One: A Star Wars Story when it opens this weekend? I joined Adam 12 to give you an idea of what to expect. But don’t worry, I didn’t give anything away. END_OF_DOCUMENT_TOKEN_TO_BE_REPLACED

Lee Domaszowec from the Petco Foundation and Rebecca Baylies, Director of Development and Communications at Cape Ann Animal Aid, joined me to talk about Unleashed by Petco’s upcoming series of adoption events. They’ll be held at Brattle Square, Boston Common, and several adoption shelters throughout Massachusetts. Listen to get all the details! END_OF_DOCUMENT_TOKEN_TO_BE_REPLACED

Always a pleasure to have Boston.com’s Perry Eaton in studio for a chat. After we talked a bit about Pearl Jam at Fenway and Perry’s new podcast, he filled us in on Game of Thrones live and Narragansett’s new Bananagrams-themed brew. END_OF_DOCUMENT_TOKEN_TO_BE_REPLACED