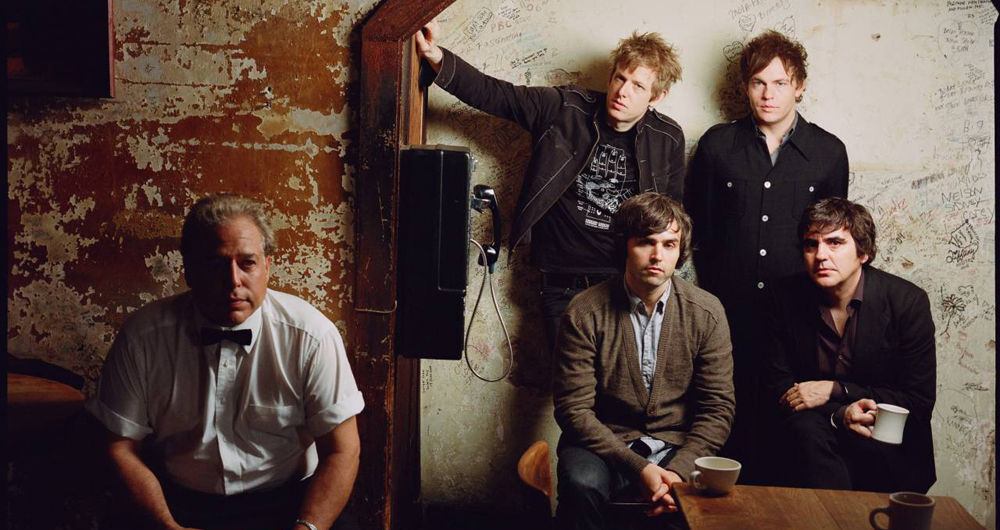 This week, Spoon leads the charge with a long awaited new record. It may actually live up to the hype too, but don’t snooze on releases from Naomi Punk, Christopher Denney, and more. It’s not to late to find your summer jam. Dammit, we’ve got all of August left, kind of.

Unlike most punk rock mewling from the gutter today, Spider Bags make music that is neither tone-deaf nor belligerent. In a world of extremes, their North Carolina brand of drunk rock sheens with a sense of Tarheel gentility that borrows equally from surf jams and garage sessions. “Frozen Letter,” their latest LP from the infallible Merge Records, is a catchy dust pile that falls just short of jangle pop – meaning that it has all the distortion of the Stooges with a chantable sensibility that’s rarely been seen since Van Morrison slurred “Gloria” across a turntable 50 years ago (see the closing moments of “Coffin Car”). And, at a scant 33 minutes of playtime, the aging punksters from from Dixie know the impact of ephemera – even if “Frozen Letter” doesn’t leave you with the tinnitus of their past records.


Sounds like: Your mom’s basement circa junior high, Titus Andronicus (this is not a coincidence), Jameson in your grits


-Jerard Fagerberg
Spoon’s first album since 2010’s divisive, intentionally lo-fi “Transference,” “They Want My Soul” finds the band strutting back into the scene, confident and punchy as ever. This time around, they stick to their guns, while also routinely swerving into new means of stylistic experimentation. At times, the stylistic jumps can be a little distracting, but, overall, this is an amazing example of a band fully in control of their sound and vision. Now at the age of 43, Britt Daniel and his voice have somehow gotten sexier and raspier. The drums seem to hit harder and faster. From the classic Spoon swagger of “Rent I Pay” to the dreamy serenity of “Inside Out,” “They Want My Soul” finds the band adding some refreshing flourishes to what they know best, and what they know best is how to roll out a damn great LP.


Sounds like: Spoon dipping their toes into new wave and post-punk


-Tyler Cumella
Olympia garage rats Naomi Punk picked an over-saturated time to jump on the scene with 2012’s “The Feeling.” The album was stirring, but didn’t allow the band to get far into the lexicons of neo-punks nationwide, as studs like Ty Segall, King Tuff, and the entire Burger Records output were capturing hearts on the same radar. “Television Man” is the perfect opportunity for the band though, and they seize it. It’s the ideal new punk release for Captured Tracks, toying with a more acidic guitar feel and turning the basement churner standard on its back. If you’re looking for a grungy release that shuffles up melodies and rhythms, this record could be your August soundtrack.


Sounds like: Total Slacker fazing out of the ’90s, The next step after this little shoegaze faze that we’re in.


– Perry Eaton
That voice. It sounds like an elderly woman sitting down at a piano and purging all of her demons and spells. Christopher Denney’s voice is one that is unique to the point that it becomes an acquired taste, like a Neil Young or Tom Waits. If you you get it, he’ll be your new modern treasure. If you can’t swallow it, you’ll miss out on his poignant words, and an album, “If the Roses Don’t Kill Us,” that stirs in various flavors of vintage regality, from Nashville twang on “God’s Height,” to Memphis soul on “Our Kind of Love.”


Sounds like: a band your dad would really dig, the next guy all of the “deeper listeners” will go see at Newport Folk Festival, what country music would sound like if beer, America, and chicks never happened to the genre.


-Perry Eaton
Any band named after one of my favorite bits of pop-culture gets an automatic listen from me. Chicago’s Twin Peaks are doing the fuzzy garage-rock genre proud with their new record. “Wild Onion” is full of fist-pumping teen angst anthems that are sure to go over well with crowds on the road. If you like catchy hooks and lo-fi guitar sounds then this is more of the same. The album isn’t a huge standout, but I would put a few songs on my new road trip playlist for sure.


-Michelle Buchman
Ivan Howard and Kelly Crisp are The Rosebuds, a once married, but now divorced musical duo. Well over a decade into their career together, the two recorded “Sand + Silence” as a predominantly reflective album, bringing together the best sound components of The Rosebuds’ extensive catalogue. Produced by Bon Iver frontman Justin Vernon, the record is one of the year’s most charming– a smart, balanced project with a distinct alternative groove tying it neatly together. It’s slightly more lucid than “Repave”—Vernon’s most recent recorded with The Volcano Choir—and while “Sand + Silence” takes on a good deal of character from its well-known producer, the finished product has a feel decidedly unique to The Rosebuds. “Mine Mine” and “In My Teeth” are two standouts from the record.