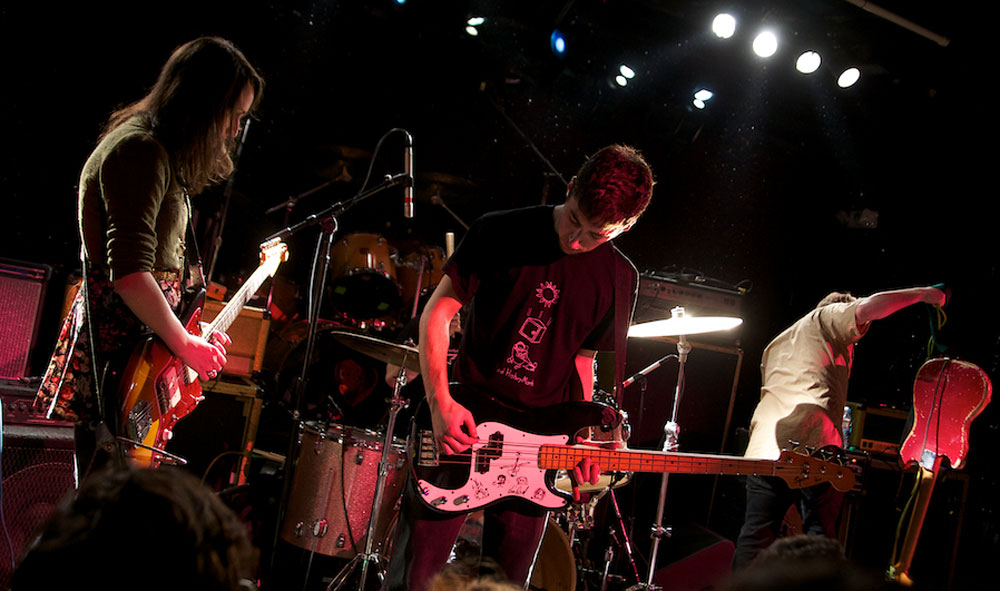 For a moment, please indulge me in some hyperbolic doom mongering.

Let’s say that the BPD masters the infiltration of punk rock circles via bogus Facebook profiles and shuts down every D.I.Y. venue in the city. (It could happen.) Around the same time, real estate developers bulldoze the Middle East, then whimsically decide to raze all the other Boston rock clubs, leaving nothing but high-income condominium housing in their wake. In this not-entirely-absurd dystopian future scenario, with no traditional or underground venues, where will bands play?

Other kinds of places, that’s where. Like Tasty Burger, for instance. The Harvard Square eatery has hosted under-the-radar shows for a while, and launches an initiative for regular publicized concerts with Speedy Ortiz’s “Real Hair” EP release party on Saturday.

Should clubs and D.I.Y. venues all be reduced to memories, the Northampton quartet is better prepared than most to thrive under the strange circumstances. Via conference call, singer/guitarist Sadie Dupuis and bassist Darl Ferm tell us they already do stuff like play in weird unconventional venues all the time.

Q. I read you still do stuff like play coffee shops on the side when you’re on tour?

Sadie Dupuis: I mean, we wind up playing clubs a lot and it’s not necessarily our preference to play clubs. So when we have a say in the selection of where we’re playing, we like to opt for new places or spaces that are less conventional. At this EP release party, there’ll be food, it’s a place that’s fun for people, and that’s part of the appeal.

Q. What else draws you to less-conventional venues?

SD: I like when, y’know, entry cost is as low as possible and age restrictions aren’t necessarily 21-plus. Especially in Boston. Boston has really great clubs and we love playing them, but the age restrictions for shows definitely prohibit a lot of people who would like to come. When I was an undergrad in Boston, there were a ton of things I couldn’t go see. So we like playing places that anybody could attend, theoretically, with a low door cost and low overhead, less restrictions, and more accessibility.

Darl Ferm: It’s usually a more intimate setting, too, which is nice, because you’re just hanging out with all the people at the show, which you can do more easily than at the bigger places.

SD: You can share some fries with friends. Or a tasty burger.

Q. You just got done touring with The Breeders, and you’re hitting the west coast with ex-Pavement frontman Stephen Malkmus this spring. Are you worried if you keep getting bigger tours like that, it’ll get harder to do quirky little shows like this one?

SD: I don’t know. It seems like a lot of art spaces or warehouse spaces are very accommodating in terms of size. I think there are plenty of pretty big bands – one example I would use is Screaming Females – who still play house shows despite being internationally huge. I don’t think there will ever be a reason for us not to strike a balance between clubs and less traditional places.

DF: Yeah, I think even Ted Leo did a house show in Boston within the past year. You just have to be creative about how you do it.

Q. So you just got home from The Breeders tour, you’re heading out in a couple of weeks, and not coming back home until, like, April. How do you make time to do stuff like, well, write an EP?

SD: Yeah, it’s been kind of impossible to write new stuff lately. I try to find time when we’re home from tour, but when you have friends trying to see you because you’re never home, and you’re seeing your parents because you’re never home, and you wind up doing interviews and things like this, it’s hard to find some quiet time to write new stuff. I think I’ve written a couple of things since I’ve been home, but we’re going to have to schedule some off-time at some point.

DF: Yeah, a lot of our practices are playing shows.

SD: If we’re playing a big show, we’ll be more hesitant to play new stuff. So we decide which shows will be smaller and more supportive and test new songs out that way. If we’re like, “OK, Pitchfork showcase … Probably can’t play new stuff [at this].” But if we’re saying, “All of our friends are here! We can play a whole new EP no one’s ever heard because our friends will support us either way!” It’s that kind of thing.

Q. Somebody told me you guys played under a different name for some sort of contractual reason?

DF: Are we allowed to talk about that?

DF: I guess, yeah, they can’t, like, revoke anything.

SD: We played The Paradise a couple of times in December and January and then our close friends have an annual birthday concert series called Berfest, and we obviously wanted to play that. That’s a thing for all of us in our priorities – to make sure we do these shows with our friends that are important to us personally. But The Middle East couldn’t advertise Speedy Ortiz because it would’ve infringed upon The Paradise’s promotion and stuff, so when it’s important to us to play a show like that which isn’t necessarily the biggest show, we’ll be Average C*ck. But now we probably have to change that name. I think everyone knows that Average C*ck is Speedy Ortiz.

DF: I don’t know. I think people still think it’s Perfect Pussy, which is pretty amazing. I wouldn’t have thought about it until someone came up to me and said, “Hey, Perfect Pussy’s playing this show.” I was just like, “I don’t think they are.”

END_OF_DOCUMENT_TOKEN_TO_BE_REPLACED

Enter to win a pair of tickets to attend The Hess Collection Seminar and Dinner as part of Boston Wine Festival 2018 at the Boston Harbor Hotel on Wednesday, March 14th. END_OF_DOCUMENT_TOKEN_TO_BE_REPLACED

I referred to it as the “best kept secret” in Boston arts for the holidays. END_OF_DOCUMENT_TOKEN_TO_BE_REPLACED

Boston’s arts scene shines at this time of year. END_OF_DOCUMENT_TOKEN_TO_BE_REPLACED

It’s so much more than a holiday show. END_OF_DOCUMENT_TOKEN_TO_BE_REPLACED

Rock for a cause this holiday season. END_OF_DOCUMENT_TOKEN_TO_BE_REPLACED

Get out and see a show this holiday season, and save some money when you do. END_OF_DOCUMENT_TOKEN_TO_BE_REPLACED

You can help give the gift of music to kids in need this holiday season. END_OF_DOCUMENT_TOKEN_TO_BE_REPLACED

Be honest: when’s the last time you attended a Gala? END_OF_DOCUMENT_TOKEN_TO_BE_REPLACED

The October staple returns on the 21st. END_OF_DOCUMENT_TOKEN_TO_BE_REPLACED