“Transformers” and “Pacific Rim” proved that people love watching movies about fighting robots. Now a Somerville startup has launched a Kickstarter hoping to make those big-screen battles a reality. And all it will take is $1.8 million.

From the guys who raised almost $100,000 for an 18-foot, six-legged, two-ton robot named Stompy comes MegaBots: Giant fighting robots with you at the controls. And the guys at MegaBots Inc., operating out of the Artisan’s Asylum in Somerville, believe fighting robots are the future of sports, according to an interview with Beta Boston.

The robots made a splashy debut earlier this month at New York Comic Con, but they’re far from fully functional. When completed, they’ll not only walk on two sequoia-sized legs, but shoot paint-filled projectiles at one another. “As projectiles hit their targets, armor plates shatter and explode and computers tally critical hits to the robot’s limbs and torso,” the startup’s Kickstarter page explains. “As more and more hits are taken, robots start to limp, joints start to seize, weapons start to jam, and after enough damage, limbs are completely blown off. The last MegaBot standing wins!” The algorithms that allow the bots to balance and walk on two legs come from Andreas Hofmann of MIT’s Biomechatronics Lab.

The startup’s motto: “We are making the world a more epic place, one giant robot at a time.”

The MegaBots have been getting some positive press, and wowed visitors to New York Comic Con with this demo. The technology is clearly there, but will users be turned off by the high price tag? Internet users have paid a guy $55,000 to make potato salad, but $1.8 million is a serious chunk of change, and the tangible Kickstarter rewards don’t really start until the higher levels of donation.

For $125, all you get is a (one-of-a-kind!) piece of scrap metal broken off of a MegaBot during battle. For $2,500, you could have a chance to operate a MegaBot in battle if the company meets its goal, tentatively scheduled to be completed in 2016. And for a cool $1 million, you could get your very own MegaBot, and finally one-up that annoying cousin of yours who got his wife a Lexus with a bow on it. December to Remember this, Gary! 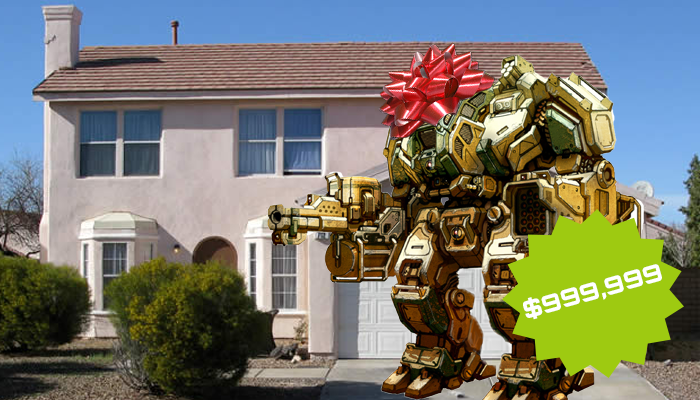 Enter to win a pair of tickets to attend The Hess Collection Seminar and Dinner as part of Boston Wine Festival 2018 at the Boston Harbor Hotel on Wednesday, March 14th. END_OF_DOCUMENT_TOKEN_TO_BE_REPLACED

HUBweek came to Boston, and we were there to take it all in. END_OF_DOCUMENT_TOKEN_TO_BE_REPLACED

This should never have happened. END_OF_DOCUMENT_TOKEN_TO_BE_REPLACED

I spend far too much time on Twitter. Here’s a handful of posts from last year that I found to be entertaining on one level or another. Enjoy. END_OF_DOCUMENT_TOKEN_TO_BE_REPLACED

Apologies in advance for burying this in your skull forever. END_OF_DOCUMENT_TOKEN_TO_BE_REPLACED

If you like cover songs, you’re gonna love this. And by love, we mean probably hate. END_OF_DOCUMENT_TOKEN_TO_BE_REPLACED

Whether you celebrate the unofficial beginning of summer on Memorial Day weekend, or Meteorological Summer on June 1, or the Summer Solstice, make no mistake: summer is here. END_OF_DOCUMENT_TOKEN_TO_BE_REPLACED