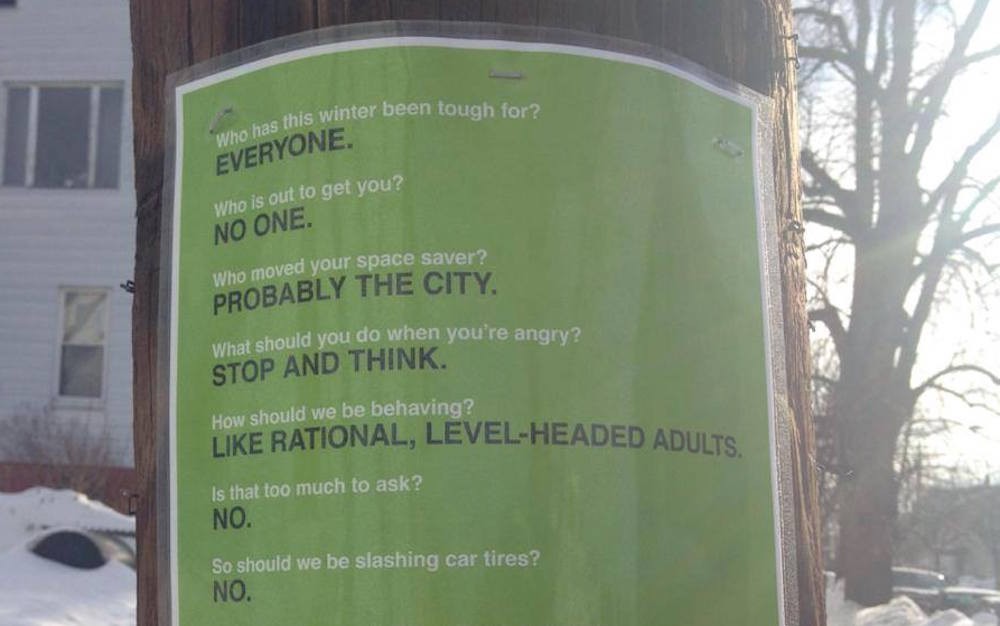 When it comes to the subject of space savers in Boston, you’re hard pressed to find anything but hostility on the great wide Internet – that is, until yesterday.

A number of Somervillians noticed bright green flyers posted around their neighborhood utility poles yesterday that provided locals with a step-by-step instruction on how to behave like a human being through the worst of the winter. With space savers and slashed tires becoming more and more common, the posters are a reminder that this too shall pass.

The mini-movement was incited by artist Rachel MacCabe, who told the Boston Globe that she was inspired to create the simple graphic after her neighbor’s windshield wipers were vandalized, closely followed by her boyfriend’s tires being slashed by an unknown perp.

“People are just acting like animals. Even less civilized to an extent,” MacCabe told the source.

Simply put, her project asks locals to relax and remember that in a handful of months, this nightmare of a winter will pass.

This message is especially well-timed as Mayor Marty Walsh has officially called off space savers, instructing local garbage collection to clear them beginning on Monday as if they were ordinary trash. While Somerville has never allowed their residents to use space savers, it certainly hasn’t stopped people from trying.

“This snow is bringing out the worst in people for sure,” MacCabe said. “I was hoping we could reel them back into sanity.”

Will her efforts be heard by the community? It looks that way – Facebook page Massachusetts Memes has picked up the post and it’s been shared nearly a thousand times. Keep spreading the love, Boston, and remember that summer will get here come hell or high snow.

Enter to win a pair of tickets to attend The Hess Collection Seminar and Dinner as part of Boston Wine Festival 2018 at the Boston Harbor Hotel on Wednesday, March 14th. END_OF_DOCUMENT_TOKEN_TO_BE_REPLACED

Artists for Humanity Co-founder Jason Talbot and Major Gifts Director Emily Smaldon were in studio this morning with Mallory Bazinet, Event Manager for GrandTen Distilling. Jason and Mallory talked about The Contemporaries, their upcoming event to launch a new patron group for young professionals. Click here to join them on Thursday, August 17! END_OF_DOCUMENT_TOKEN_TO_BE_REPLACED

Aida Villarreal-Licona is the Events Coordinator for SoWa Boston’s Art & Design District. She was in today to talk about their holiday shopping event this Thursday December 15 from 4-8 p.m. at 450 Harrison Avenue. A great opportunity to help local artists and get some holiday shopping done! END_OF_DOCUMENT_TOKEN_TO_BE_REPLACED

Natalie Lemle was in to talk about ArtLifting, a program that aids homeless and disabled artists. Currently, 72 artists in 11 states are receiving 55% of all profits from your purchase of their artwork and photography. Click “more” to hear my chat with Natalie and to see work from one of the artists. END_OF_DOCUMENT_TOKEN_TO_BE_REPLACED

Boston band Funeral Advantage is Tyler Kershaw. And Tyler Kershaw had a fun childhood, so it seems. END_OF_DOCUMENT_TOKEN_TO_BE_REPLACED

Perry put me on to daephne and the album blew my mind. END_OF_DOCUMENT_TOKEN_TO_BE_REPLACED

It’s no secret that Bostonians like to show their Patriot pride with tattoos. Who can forget the awesome guy who got that sweet Bill Belichick arm tattoo? Or the less-awesome guy who showed off his full-head Tom Brady helmet tattoo in his mugshot? END_OF_DOCUMENT_TOKEN_TO_BE_REPLACED