Snowbrawls, Chowder Showdowns, and More Events in Boston This Week 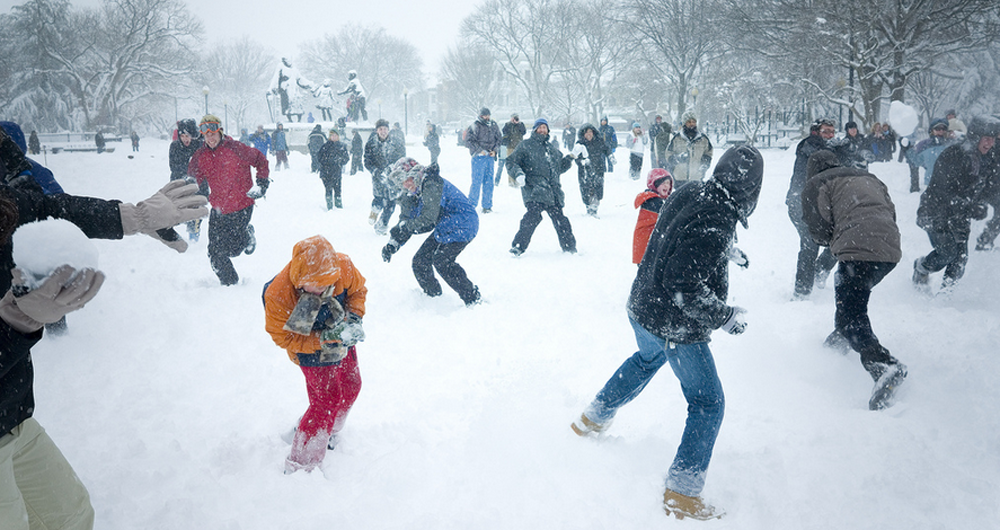 This week’s events roundup comes with the caveat that half of this stuff is going to be canceled or rescheduled due to the looming snowmaggedopocalypse, and anyways there’s a decent chance we’ll all be huddled together around a single Yankee Candle in our powerless homes for a couple days and the idea of leaving to go to an “event” will sound insane. Just make sure you can travel safely and events are still on, and if not, you can always go sledding.

Tomorrow’s Awake Boston morning rave has already been postponed to next Tuesday, when it will take over The Button Factory in Fort Point with DJ Sudo’s pumping beats plus coffee, tea, snacks, and optional yoga. The party also celebrates National Chocolate Cake Day by, why not, serving it for breakfast, and now that you’re eating cake on a Tuesday morning you might as well go all out and pretend it’s Saturday night. I mean, an average Saturday night for someone who’s a little bit cooler than you and goes to really cool dance parties, dance parties with other people, not just you in your jammies playing Robyn on your phone and eating chocolate cake. (7 a.m., FREE, all ages)
The third annual BU Snowbrawl is going down Tuesday on the esplanade, and it’s open to anyone who can safely make it out there and promises NOT TO THROW ICE BALLS GUYS THAT REALLY HURT. The current Guinness World Record for largest snowball fight is 5,834 people and it’s held by, oh hey look at that, Seattle. Just stay focused and do your job and we can win this one, too. (2 p.m. or whenever there’s enough snow, FREE, all ages)

Help thaw yourself out with a couple nice warm bowls of chowder at The Chowdah Pot, pitting six Assembly Row restaurants against each in a contest for chowder supremacy. Of course, we’re talking about New England clam chowder here, not Manhattan clam chowder A.K.A. Manhattan Tomato Soup with Clams. Can you even put oyster crackers in it? Probs not. This is another controversial opinion but for my money oyster crackers are the best foodstuff that’s shaped like a hexagon (6 p.m., $5, all ages)

Art historians have always posited line above color — drawing was seen as rational and structured, and color is about emotion and expression (like if something “colors your judgment” you’re not thinking straight). MassArt’s new Color Fields exhibition says “nah, dude” to all that and celebrates vibrant color in a variety of disciplines, kicking off with an opening reception Wednesday. Think about it: When you were a kid, coloring between the lines wasn’t as important as which color you picked out from your family’s giant tupperware container of crayons. You ever play the game where someone yells out a Crayola color and you all dig around trying to find it? “Cerulean, go!!!” “Burnt Siena!!!” (6 p.m., FREE, all ages)

The oldest theater organization in the U.S., Harvard’s Hasty Pudding Theatricals honors their 2015 Woman of the Year is Burlington native, Boston College alum, 15-time (!) Emmy nominee, actress, comedian, producer, author, and let’s just go ahead and say it, national treasure, Amy Poehler. The festivities will begin at 2:45 with Poehler leading a parade through the streets of Cambridge, followed by a celebratory roast and presentation of the Pudding Pot at Farkas Hall, the Hasty Pudding’s home since 1888. (2:45 p.m., FREE, all ages)

Widely regarded as the first film to depict hip-hop culture, 1983’s “Wild Style” follows seminal figures from the early ‘80s scene in the Bronx and Lower East Side, such as Fab 5 Freddy, Lee Quinones, Lady Pink, the Rock Steady Crew, The ColdCrush Brothers, Queen Lisa Lee of Zulu Nation, and Grandmaster Flash. The Brattle Theatre will screen the film Thursday, accompanied by an appearance by director Charlie Ahearn, who will bring along some of his more recent short films. (7:30 p.m., $10-12, all ages)