Skip wine at Thanksgiving, drink beer: Brews for every course 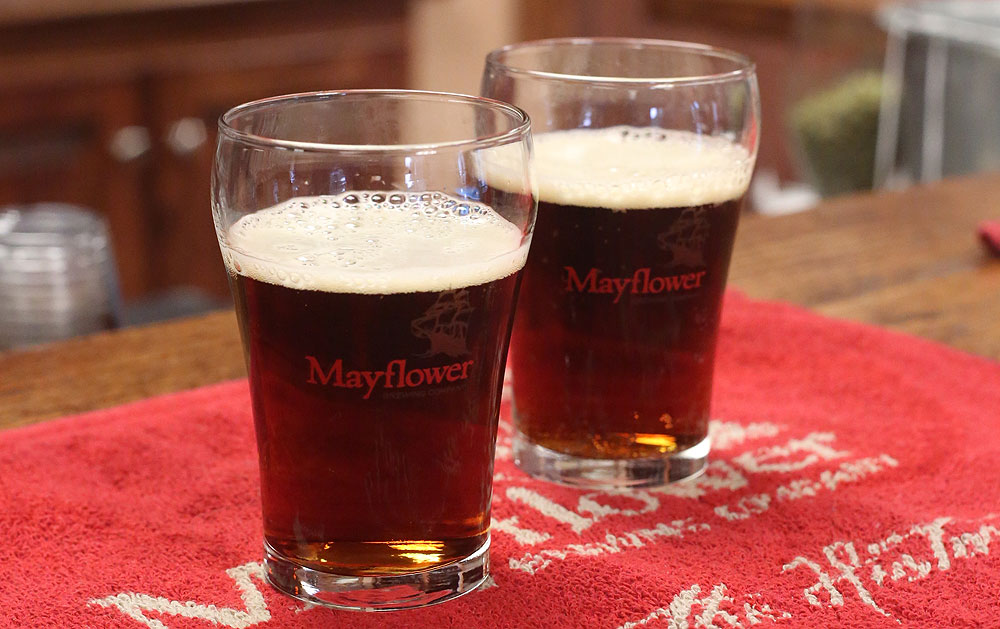 Wine for the holidays? Beer allows for just as much, if not more, variety of food pairing options. With everything shared family-style at Thanksgiving, as opposed to separate courses, the beers selected should be able to incorporate different flavors. So grab a bunch of beers, leave them scattered around the table and let people figure out what they like. Some styles of beer that work best include saisons, brown ales, doppelbocks, witbiers, winter warmers, as well as autumn beers like marzens and yes, even pumpkins. Here’s a quick guide to help figure out some good flavor pairings from appetizers through dessert.

Start out with something light and approachable. A berliner-weisse, with its champagne-like effervescence and mild tartness, will help placate the non-beer drinkers. And with an ABV between 2-4 percent, no long-lost aunt is getting tipsy and pinching your cheeks just yet. Local choice: Night Shift Ever Weisse. Non-local choice: Dogfish Head Festina Pêche.

If the cheese plates are out, try a brown ale. They pair fantastic with a nutty hard cheese and can even stand up to some cheddar and blue cheeses. Local choice: Pretty Things Saint Botolphs Town. Non-local choice: Sierra Nevada Tumbler

The spicy and fruity notes of a witbier go perfectly with cranberry sauce. Local Choice: Clown Shoes Clementine/Non-Local: Unibroue Blanche de Chambly. And sweet potatoes, with all their spices and butter, would go well with the rich maltiness of a dubbel or doppelbock. Local choice: Smuttynose Winter Ale. Non-local choice: Ayinger Celebrator.

Saisons/Biere de Gardes are one of the best beers to enjoy with a meal. Their delicate body and spicy, earthy flavors would be great with turkey; accentuating, but not overpowering the crispy, flavorful skin and big herb flavors. Local choice: Slumbrew Flower Envy. Non-local choice: Saison Dupont.

A good traditional option would be to throw in a rauchbier. Chances are many people at your table have never tried such a beer, so it would serve as a great conversation piece. Even better, this beer is likely very similar to what the Pilgrims first drank. Malts used to be dried over an open flame, giving beer its original smokiness. Kiln drying didn’t take off until the 18th century. This style of beer would pair best with any smoked cheeses and meats served as an appetizer or with any maple or nut-based desserts. Local choice: Jacks Abby Smoke & Dagger or Samuel Adams Cinder Bock.

Bust out the big guns for dessert. Go sweet, boozy, and heavy with an assertive Quad, Imperial Stout, or Belgian Strong Ale. Sticking with regional authenticity, try Mayflower’s Thanksgiving Ale. Aged on American white oak, this 8 percent English Strong Ale brings notes of vanilla and caramel, and a light spiciness. Some other local beers that would work well are Harpoon Grateful Harvest or Cape Cod Beer’s Berry Merry. If you want to go high ABV and with a big malty presence, go for La Trappe Quad or North Coast Old Rasputin. Then get ready for the most satisfying post-Thanksgiving nap you’ll ever have.

Enter to win a pair of tickets to attend The Hess Collection Seminar and Dinner as part of Boston Wine Festival 2018 at the Boston Harbor Hotel on Wednesday, March 14th. END_OF_DOCUMENT_TOKEN_TO_BE_REPLACED

This year, the festival is welcoming more female wine producers than ever before, making up 20% of all winemakers that will be at the festival. END_OF_DOCUMENT_TOKEN_TO_BE_REPLACED

The holidays are here, so raise a glass. END_OF_DOCUMENT_TOKEN_TO_BE_REPLACED

‘Tis the season to mix a nice, stiff drink. END_OF_DOCUMENT_TOKEN_TO_BE_REPLACED

Warm up with Tito’s on your sweater and Tito’s in your glass. END_OF_DOCUMENT_TOKEN_TO_BE_REPLACED

There’s a ton going on at Idle Hands in Malden this spring. Dan McDonnell and Josh Deering joined me in studio to talk about Maifest, what’s new in the Taproom, and their collaboration with The Black Ale Project. Oh, and don’t miss Idle Hands at BeerAdvocate’s Microbrew Invitational next month! END_OF_DOCUMENT_TOKEN_TO_BE_REPLACED

Giovanna Guzman is the marketing coordinator at Kings Bowl, who you can visit in the Back Bay, Burlington, Lynnfield, Dedham, and soon in the Seaport. We talked beverages, naturally, seeing as it’s Thirsty Thursday. And we sampled sangria. And it was soooo good. END_OF_DOCUMENT_TOKEN_TO_BE_REPLACED

These five words might change your life: Farmer Willie’s Alcoholic Ginger Beer. Co-founders Nico Enriquez and Max Easton were in studio with me this morning. Nine-packs and kegs of Ginger Session coming next week! END_OF_DOCUMENT_TOKEN_TO_BE_REPLACED

Chef Avi Shemtov–he of the Chubby Chickpea and Single Guy Cookbook–was back in for a visit this morning to talk about his latest venture. TAPPED is a mobile beer catering company that specializes in on-site draft pours of both craft beers and mainstream brands. Thirsty yet? END_OF_DOCUMENT_TOKEN_TO_BE_REPLACED