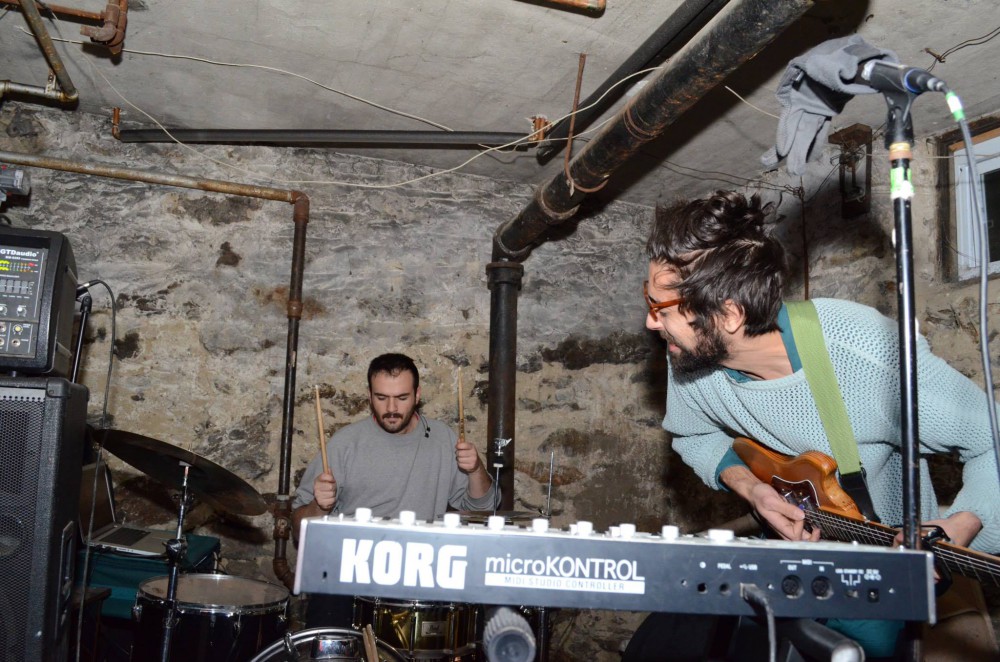 It’s that time of year when the liberating of feeling of summer cajoles a bit of carefreeness out of our spirit. Sometimes, however, such nonchalant attitudes can end up biting you right back in the ass. Like, say, for instance, on your bike. It’s a feeling Skinny Bones‘ Jacob Rosati knows a thing or two about, which is why today he gives us our Mid-Week Playlist of songs for “crashing your bike in slow motion.” The man on vocals for the JP-based duo brings a first to our weekly tradition of themed playlists, this week giving specific bike-crashing scenarios with a song to soundtrack each. “There are so many ways to go over the handlebars,” he says. “But only one speed to do it at.”

The playlist comes in good time, as Skinny Bones released a new album, “Noise Floor,” just last month. The record is focused progression from the duo’s previous release, “Skinni Dip,” just last spring, continuing with a bedroom pop aesthetic, but providing a more panoramic view of different musical territories. Instrumentally, the album employs a wide range of sounds, from the comforting tones of Rosati’s acoustic guitar to the glitchy ambience of electronic sampling to the everything-but-the-kitchen-sink percussion contributions of drummer Christopher Stopiello. The product is an pensive gaze melded together for an effort that is atmospheric, but cohesive.

Skinny Bones has been busy maturing these songs in the live setting, but will be back to gigging in July, when the band will play some house shows as well as a show at Berklee’s Cafe 939 on August 22. In the meantime, dig “Noise Floor” in full, and check out their Mid-Week Playlist below.

“It was those damn playground kids. You turned for just a second to watch a little boy cover the sprinkler in the park. It shot up his pants instead. This one mohmnt of distraction forced you to hit a parked car. You skid gently over the hood as your bike stays behind.”

tryng[to]ctchp EP by {pwsd}
“Trix get the chix. You’ve seen it, all those backwards-hat killas popping a 12 o’clock wheelie. They only come down for the girls. You came down on the curb.”
“Rage biking. Flicking off parked cars. Running down children. Smashing Jameson bottles on busses. Drunk biking is still a drunk driving, and oh boy did that guardrail on a 60ft cliff know it.”
“Hubway bikes are indestructible, they say. Not when you use them as a getaway car, you prove.”

They don’t get us, Freddie Fixie.

As the outside world turns on you and your single-speed love, you realize there is no place on this earth where you two can be happy together. Building a ramp 400ft into the ocean, you clip in for the last time. Your tears are the only fresh water as you and your lover sink to the ocean.”

Tunnel Visions by Tunnel Visions
“Delivering pizza seemed like an incredible way to make a quick buck, get those burner thighs, and practice riding with no hands, carrying a slice. Your last bite of gluten-free tempeh ‘za came right before your first ever high-speed connection with a car door.”

ghost toast by yyu
“She can’t possibly be with him.

Frantically, you start biking towards her house. Flowers bungee corded to your bike rack. You didn’t mean it. She’s worth it. But,

He’s better than I.

Mid-flight you realize this is the end. No helmet. Cars in the intersection. Petals slowly tearing from their buds. A screaming mother. A crying infant. As the car tire is a fraction of an inch from your unprotected skull, you think, who you gonna to ride with now that I am gone?”