Skaters: America’s next big rock band has roots in Boston 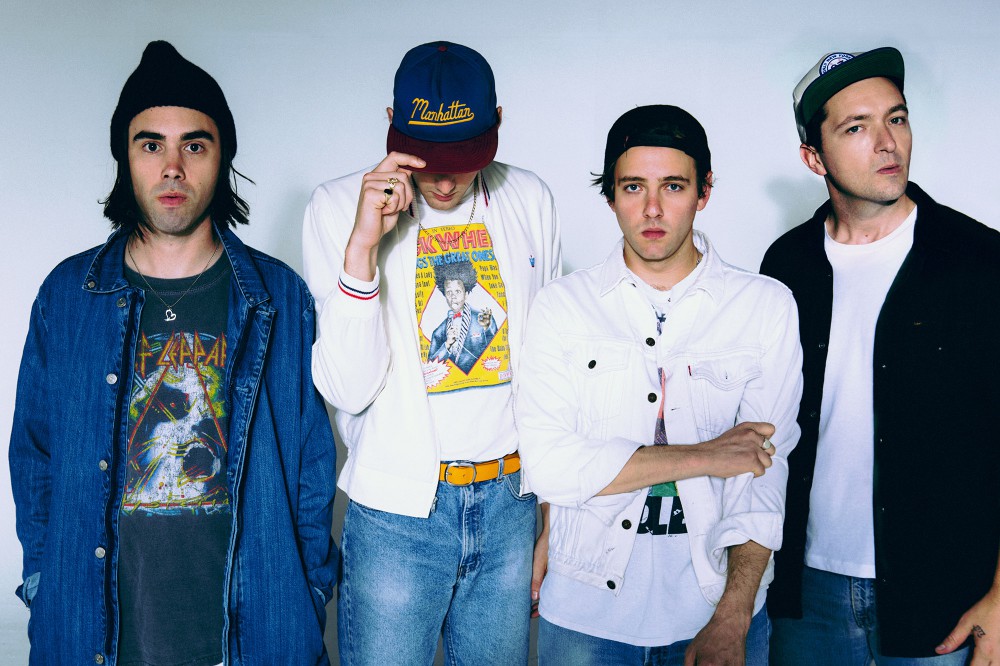 If you haven’t already, you likely will soon start hearing a song called “Miss Teen Massachusetts” a whole lot. The song is by a Manhattan-based trio called Skaters, which in just a couple of years has scrapped together an EP, signed with Warner Bros., and is now releasing a debut album, “Manhattan,” this Tuesday. With a loaded SXSW schedule and a US tour to boot, the band could very well be America’s next guitar-wielding garage gods. But despite now being New York poster boys, the band has roots that run deep right here in Boston.

It started years ago at Newton South High School. Michael Ian Cummings and Noah Rubin, vocalist and drummer respectively for Skaters, grew up in the Boston suburb together, playing in bands and growing a mutual affinity for the same types of music. “I was into more classic rock stuff and Noah was really into hardcore,” says Cummings, now 28. “We didn’t get along immediately, but I showed him some songs I wrote and we started a band.” After a few early projects, the two formed Furvis with fellow classmates.

Furvis quickly matured by gigging constantly and linking up with older acts around the city. Cummings and Rubin particularly found a bond with a local musician named Clayton Scoble, who led a Boston band called Francine and performed previously with the likes of Til Tuesday and Aimee Mann. Scoble found Furvis over the Internet, and after attending a show, ended up working with the band to produce its first EP when they were all still juniors in high school. “Clayton was basically our mentor early on,” says Cummings. “We were planning on splitting up after high school and doing the college thing, but he really encouraged us to not stop playing music together and really give it a try.

The band did give it a try, and unfortunately, upon the release of its album “Carpe Carpet (The Soft Explosion),” the boys of Furvis were already anxious to move on from its high school days. Almost immediately, the band changed its name to The Dead Trees and focused on new sounds. Despite playing regularly with bands like Drug Rug and Age Rings and establishing an impressive following in Boston, the band was focused on a new scene as well. As Cummings puts it, in order to grow, the band “started fresh because we needed to.”

Portland, Ore., was the majority vote, but in retrospect, Cummings still believes that New York would have been a better option. “I wanted to go to New York, but everyone just thought it was too unaffordable,” he says. “I thought New York was the place to be because we had just started working with Ryan Gentles (manager of) The Strokes, and I thought that would have been our best move.” The Dead Trees released an EP and a record called “King of Rosa” before packing up once again and moving to Los Angeles.

It wasn’t long in LA either, before the band started itching for change. Bassist Todd Dahlhoff began playing with Electric Guest, and guitarist Matt Borg focused on family matters. But the last straw for the band came with the release of its final album, “What Wave,” which saw very limited success. “I had thought we’d made the best thing we had ever made and we all thought it was really special. I still love that record, but it was one of those things where we couldn’t get anyone to bite,” says Cummings. “Everyone kind of grew up. It wasn’t the same as when we were kids sleeping in the van anymore.” After years of playing music together since childhood, The Dead Trees decided to call it quits.

Discouraged, Cummings and Rubin continued on, and made the move to New York. Once again, the two quickly began searching for a new project. “We didn’t know what else to do, we aren’t capable of doing much else really,” says Cummings. “But we did know that once we did get going with this band, we would have to go 100 percent or that would probably be it.” The two ended up running in with Josh Hubbard, a British guitarist who had previously played in The Paddingtons and Dirty Pretty Things. He and Cummings met at a swanky mansion party in LA just before The Dead Trees broke up. When Cummings and Rubin reconnected with him after their move to across the country, Hubbard was on their doorstep a day later ready to play. “Sometimes, you just meet people that make things happen,” Cummings says. “Josh is definitely that personality.” They formed Skaters that night, and booked their first three shows the next day.

In about two years, Skaters has caused a stir both in New York and in Hubbard’s native land overseas. The success of its EP landed the band a record deal with Warner Bros., which will release Skaters’ debut album, “Manhattan,” this Tuesday. The band’s collective maturity, accrued from years of being rock ‘n’ roll journeymen, is balanced nicely by its desire to revisit the styles that make them feel most energized. “We wanted to play fun fast music again, like when we were younger,” he says.

With experience under their belts, the boys of Skaters have grown a numbness to critics, naysayers, and the tomfoolery of labels (Noisey offered a particularly scathing, profane review). They have played to empty rooms and seen albums flop, but even though it has been nightmarish at times, they have nonetheless lived the rock ‘n’ roll dream. They’re doing it right this time, too. Skaters stays true to classic rock sounds, but provides a patchwork of different production influences, for what Cummings refers to as an “art project.” This sound will almost assuredly win over ears at next month’s SXSW festival, along with the growing success of lead single “Miss Teen Massachusetts,” which is spreading rapidly from one radio station to the next.

As if we needed an added bonus, the two Bostonians of the band still look fondly upon their early days, and maintain loyalty to the city in which they started. Not only have they named their hit after their home state, but Cummings and Rubin recruited hometown friends like Viva Viva’s Dan Burke and Tommy Allen of local acts Drug Rug and Fedavees to play shows as part of the touring band. “Boston’s always a part of who we are,” say Cummings. They started here. Now it’s time for them to take over America.

Enter to win tickets to see Trio Da Kali at The Villa Victoria Center of the Arts (Newton, MA) on April 10th. END_OF_DOCUMENT_TOKEN_TO_BE_REPLACED

END_OF_DOCUMENT_TOKEN_TO_BE_REPLACED

Enter to win tickets to Rhye at The Paradise on February 28th. END_OF_DOCUMENT_TOKEN_TO_BE_REPLACED

Her new album has been pushed back, but we have Kimbra’s new single for you. END_OF_DOCUMENT_TOKEN_TO_BE_REPLACED

The folk duo returns with a new record this week. END_OF_DOCUMENT_TOKEN_TO_BE_REPLACED

Now that we’re done looking back at 2017, let’s look ahead at 2018. END_OF_DOCUMENT_TOKEN_TO_BE_REPLACED

Our first Song of the Week for 2018. END_OF_DOCUMENT_TOKEN_TO_BE_REPLACED

In a year when so many things were off, the music was right on. END_OF_DOCUMENT_TOKEN_TO_BE_REPLACED