How to Solve the Singapore Math Problem

You know that Singapore math problem that people have been struggling to solve? Here’s one easy way to figure out Cheryl’s birthday, step by step.

Let’s start with the original problem. 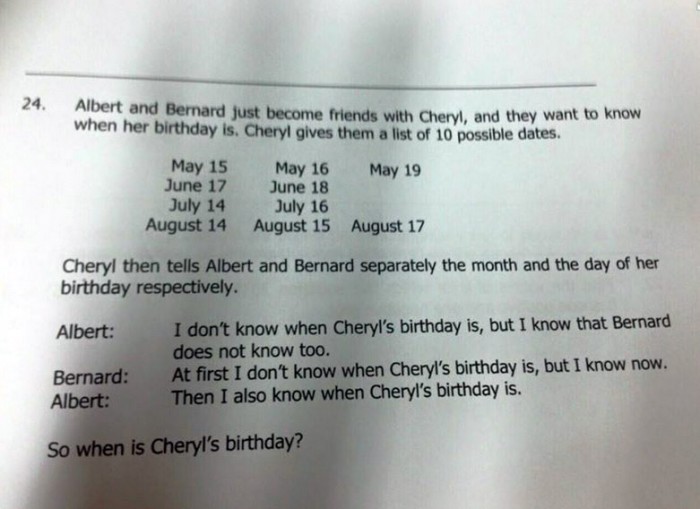 Then we have Albert’s opening statement: “I don’t know when your birthday is, but I know Bernard doesn’t know, either.”

The second half of what Albert says is key here. Because Albert knows Bernard doesn’t know, that means Cheryl’s birthday can’t be May 19th or June 18th, because if Cheryl had whispered “18” or “19” in Bernard’s ear, he would have known her birthday, as there are no other possibilities for the 18th or 19th.

Based on Albert’s statement, we can also eliminate the other days in May and June. Why? Because if Albert KNOWS Bernard doesn’t know, Cheryl must have whispered either “July” or “August” in his ear.

So the first statement from the problem has now been parsed, and we are left with five possible birthdays: July 14th and 16th, and August 14, 15, and 17.

Now, we move to Bernard’s statement: “At first I [didn’t] know when Cheryl’s birthday is, but I know now.”

Assuming Bernard is not lying and he has figured out his remaining options from Albert’s statement (which is a prerequisite for any logic problem), we can eliminate both July 14th and August 14th. If Cheryl had whispered “14” to Bernard, he would not know at this point, but he does.

And now Albert’s final statement: “Now I know too!”

If we apply the same test as before, that Albert is not lying and is clever enough to know the remaining options, we can use the same method as step 4, but with months instead of days.

If Cheryl had whispered “August” in Albert’s ear, he would not have said “I now know too!” because both August 15 and 17 are still on the table. He would have said something like “I still don’t know” or “I’ve got it down to two options, stop pressuring me!” or “Cheryl you’re the worst friend ever.”

Therefore, the answer must be July 16th.

If you made it through all of those steps without getting lost, congratulations, you’re as smart as Singaporean mathletes, whom we’re guessing are pretty dang smart.

This should never have happened. END_OF_DOCUMENT_TOKEN_TO_BE_REPLACED

I spend far too much time on Twitter. Here’s a handful of posts from last year that I found to be entertaining on one level or another. Enjoy. END_OF_DOCUMENT_TOKEN_TO_BE_REPLACED

Apologies in advance for burying this in your skull forever. END_OF_DOCUMENT_TOKEN_TO_BE_REPLACED

If you like cover songs, you’re gonna love this. And by love, we mean probably hate. END_OF_DOCUMENT_TOKEN_TO_BE_REPLACED

Whether you celebrate the unofficial beginning of summer on Memorial Day weekend, or Meteorological Summer on June 1, or the Summer Solstice, make no mistake: summer is here. END_OF_DOCUMENT_TOKEN_TO_BE_REPLACED

The nu-metal mainstays have covered the unlikeliest of songs. END_OF_DOCUMENT_TOKEN_TO_BE_REPLACED

Ladies and gentlemen, from the far-reaches of the internet, I present to you…La Boing Boing Rock Band. END_OF_DOCUMENT_TOKEN_TO_BE_REPLACED