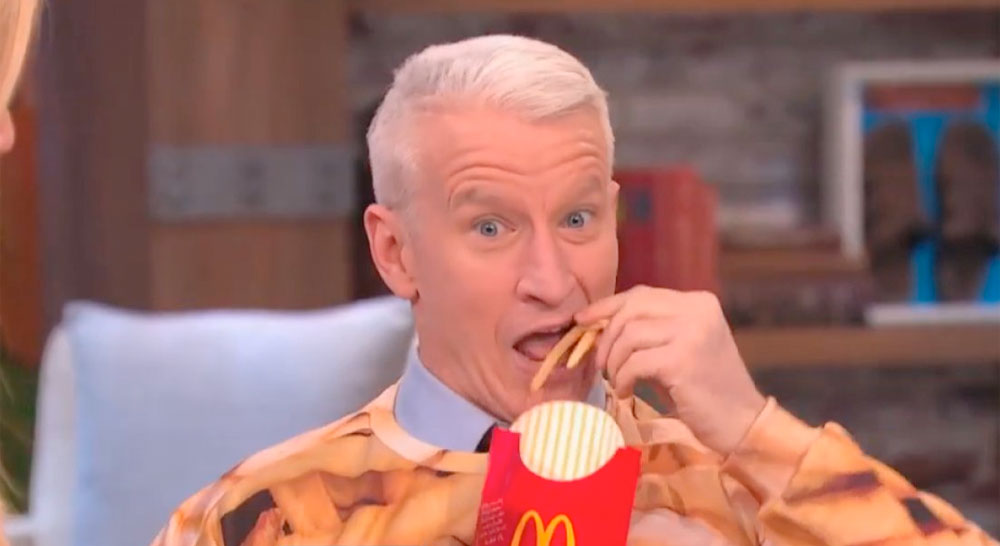 It’s a three-day weekend and you know what that means! You’ll enjoy the thrill of realizing Sunday night is really a Saturday, only to experience crushing defeat on Monday night. Then comes Tuesday, and with it, the realization that you’ve completely forgotten how to do your job. Well, you’re not there yet! Enjoy the weekend while it lasts, and make new friends with flashy conversation about abortion clinic buffer zones, dog rescuers, and smoking just about everything. And hot tip: nothing impresses folks at a bar like buffing your nails on your shirt and saying, yeah I’m feeding the homeless tomorrow. So consider doing some good on Monday … or better yet, on a weekly basis.

Sing a few shanties until a real sailor waddles over and tell you to knock it off. After Congress proposed $75 million in fisheries disaster relief in a bipartisan bill released Monday, all Massachusetts fishermen began celebrating reeling in the big bucks … well, except for Salty Pip, who is still mooning over that manatee mermaid.

Researchers celebrated the 50th anniversary of the first US Surgeon General’s report indicating that smoking is a health hazard with a new study showing some cigarette companies have increased the amount of nicotine per puff, making butts even more addictive. Invent a drink called “the tar lung” (it probably contains vermouth) and make all the smokers toast with, “Happy anniversary, Surgeon General’s report!” before drinking it.

Fabien Fieschi, the consul general of France in Boston, denied the appeals of students at Dorchester’s Codman Academy, who asked that he take Dorchester, Mattapan, and Roxbury off the advisory list of dangerous places for French tourists to visit. Qu’est-ce on dit … racist.

Anderson Cooper was a narc on live television to correspondent Randi Kaye, who spent a week in Colorado covering the legalization of marijuana, profiling a cannabis bus tour, and meeting her new best friend, Grandma Barbara. Kaye, whose childlike-wonder face is priceless throughout the report, said the joints were “the size of small cannons” and declared between giggles, “I think I need to come home.” Don’t go home, Randi! Stay where you belong!

The Supreme Court is considering the validity of a Massachusetts law that requires anti-abortion activists to stay outside of a 35-foot buffer zone at the entrance of abortion clinics. As is usually the case during Supreme Court proceedings, the Justices bickered nonsense and asked the sort of rhetorical questions that sound like something you might hear late in the day on a cannabis bus tour, like:

“I guess my reaction to that hypothetical — you must have used it for me to say, ‘Oh, that’s terrible’ — but my reaction, my intuition was kind of, ‘What’s wrong with that?’”

“One says it’s safe; one says it’s not safe. Now, how can a statute like that be considered viewpoint-neutral?”

“Do you want me to write an opinion and say there’s no free speech right to quietly converse on an issue of public importance?”

Hold your own mock trial consisting entirely of nonsense questions. Example: “Does the Second Amendment apply to extra-sharp cheddar?”

You can now show off your allegiance to the city and your controversial stance against terrorism with a “Boston Strong” license plate. Part of the proceeds from the $50 plate will go to the One Fund Boston. It still doesn’t cost anything to holler, “Boston Strong!” in the middle of a crowded bar, but it doesn’t do a whole lot of good, either.

A group of Wellesley firefighters had to return cruise tickets gifted to them by Ellen DeGeneres due to a state ethics law mandating that public employees can’t accept gifts of more than $50 in value for anything job-related. The firefighters saved a Golden Retriever named Crosby, who had chased a squirrel onto thin ice on the Charles River and fell in. Then a firefighter went to rescue him, and he fell through the ice. Then another firefighter went after him, and he fell in the river, too. The whole thing was caught on tape and it looks like a “Three Stooges” routine. Ellen, who is on a first-name basis with everyone, gave the firefighters a cruise trip to the Caribbean and bedazzled life jackets that look like they were stolen from Divine’s pleasure yacht. Wellesley Fire Chief Richard DeLorie said the group had to return the tickets, but could keep their life jackets because they had “no real value.” “Gee, thanks,” mumbled all the firefighters. “Gee, thanks!” shouted a sarcastic and embittered “Ellen Show” page, who was up until 4 a.m. singing the prints off his fingertips with a hot glue gun and trying to get the sequins just right.

Congress is trying to block the president’s efforts to move the nation’s drone program from the purview of the CIA to that of the Department of Defense. The Washington Post reports the move reflects lawmakers’ growing doubt about whether the small, phallic robots can target Al Qaeda without hitting civilians. You think we’re going to suggest a drone-related pickup line, but we’re not. Too soon.

Enter to win a pair of tickets to attend The Hess Collection Seminar and Dinner as part of Boston Wine Festival 2018 at the Boston Harbor Hotel on Wednesday, March 14th. END_OF_DOCUMENT_TOKEN_TO_BE_REPLACED

This year, the festival is welcoming more female wine producers than ever before, making up 20% of all winemakers that will be at the festival. END_OF_DOCUMENT_TOKEN_TO_BE_REPLACED

The holidays are here, so raise a glass. END_OF_DOCUMENT_TOKEN_TO_BE_REPLACED

‘Tis the season to mix a nice, stiff drink. END_OF_DOCUMENT_TOKEN_TO_BE_REPLACED

Warm up with Tito’s on your sweater and Tito’s in your glass. END_OF_DOCUMENT_TOKEN_TO_BE_REPLACED

There’s a ton going on at Idle Hands in Malden this spring. Dan McDonnell and Josh Deering joined me in studio to talk about Maifest, what’s new in the Taproom, and their collaboration with The Black Ale Project. Oh, and don’t miss Idle Hands at BeerAdvocate’s Microbrew Invitational next month! END_OF_DOCUMENT_TOKEN_TO_BE_REPLACED

Giovanna Guzman is the marketing coordinator at Kings Bowl, who you can visit in the Back Bay, Burlington, Lynnfield, Dedham, and soon in the Seaport. We talked beverages, naturally, seeing as it’s Thirsty Thursday. And we sampled sangria. And it was soooo good. END_OF_DOCUMENT_TOKEN_TO_BE_REPLACED

These five words might change your life: Farmer Willie’s Alcoholic Ginger Beer. Co-founders Nico Enriquez and Max Easton were in studio with me this morning. Nine-packs and kegs of Ginger Session coming next week! END_OF_DOCUMENT_TOKEN_TO_BE_REPLACED