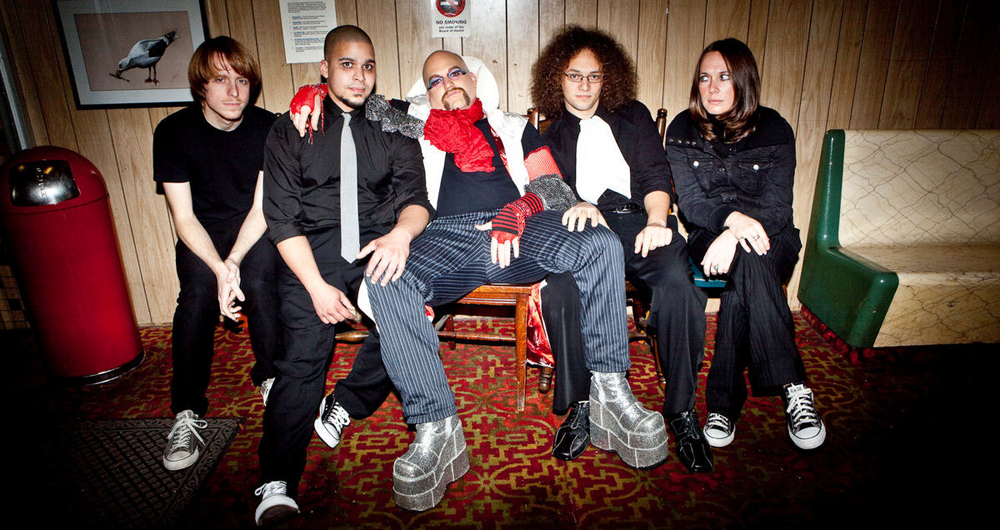 The outlandish live antics of Sidewalk Driver are practically legendary and perhaps quintessential to anyone who considers themselves a true fan of the Boston Music Scene. From his avalanche rock and roll energy to his always captivating onstage get-up, frontman Tad McKitterick is completely comfortable in his own renown. In fact, he seemingly revels in it. So it’s only natural for him to deflect predictable inquiries regarding his stage persona with the greatest of ease. “I’m not a very image conscience person. I don’t perform like a normal person. I don’t act like a normal person–so why should I look like one?”

He builds on the sentiment with palpable fervor. “Judges wear robes because they dish out justice. I wear platform boots because I dish out fantasy. I can honestly say that the fact it engages the audience is secondary. On stage, it just feels right.” Vocally, Tad also prefers being more interpretive than derivative. On Sidewalk Driver’s debut album, “For All The Boys and Girls,” he’s torn between excavating punk reverie (“Dancing With Her Friends”) and striving for priceless guitar fuzz gems (“Never Quit”).

When it comes to his future musical endeavors, McKitterick is ambiguous when addressing the direction the band will go in next. “I feel like ‘For All The Boys and Girls’ had a lot of departures within itself. We just sort of write what we write.” He inevitably becomes tongue and cheek when describing the strategies employed to test how dulcet Sidewalk Driver songs are. “We play new songs for a small committee of transients and animals, and if they like it, then we know we are onto something.” For their upcoming performance this Saturday at The Sinclair, McKitterick states the obvious when the singer is asked if he has any tricks up his sleeves. “Candace, you should know by now that the tricks are my sleeves.”

Perry Eaton writes for Boston.com. Perry Eaton talks on the radio with me from time to time. Today, he talked to me about what he’s been listening to and some upcoming shows and festivals worth checking out. Click here to read more. END_OF_DOCUMENT_TOKEN_TO_BE_REPLACED

In some ways, Palehound has always had a home in Boston. END_OF_DOCUMENT_TOKEN_TO_BE_REPLACED

Kal Marks is the kind of band that sneaks up on you. Whether you’re experiencing them at some basement show in Allston, or in an opening set for Pile at Great Scott, you may not see them coming, but they’ll immediately click. The combination of heavy sludgy riffs and lead singer Carl Shane’s unique crooning bowls you over. It’s dark and it’s compelling, but most importantly, it’s really earnest. END_OF_DOCUMENT_TOKEN_TO_BE_REPLACED

It’s not very often that some of the most talented performers in Boston are set to grace the same stage in a single night. This Sunday marks the 1 year anniversary of Mind Spray, a local hip-hop open mic and showcase series devised by promotion and booking company The Brain Trust. END_OF_DOCUMENT_TOKEN_TO_BE_REPLACED

There’s been a lot written about Street Dogs evicting a group of neo-Nazis from the pit at their House of Blues, Anaheim show on St. Patrick’s Day. You don’t need to read any of it. Just listen to front man Mike McColgan tell the story. He talks about joining his old band, Dropkick Murphys, on stage in Boston last week, too. END_OF_DOCUMENT_TOKEN_TO_BE_REPLACED

It’s not her best. END_OF_DOCUMENT_TOKEN_TO_BE_REPLACED

When in Nashville, do as the locals do. Since relocating to Tennessee a few months ago, this seems to have been Steven Tyler of Aerosmith’s approach after announcing in an October Twitter Q&A session that he intended to record a country album, an endeavor he’s well in the process of completing. END_OF_DOCUMENT_TOKEN_TO_BE_REPLACED

“I’m Shipping Up To Boston” just turned ten years old. Boston.com’s Matt Juul put this piece together on the history and significance of the Dropkick Murphys song, then joined me in studio to talk about it. END_OF_DOCUMENT_TOKEN_TO_BE_REPLACED

Boston is a city known for it’s Irish heritage, and it’s celebration of it. Two main traditions have held strong in Boston: the St. Patrick’s Day Breakfast and subsequent Parade. But I argue there is a third now: seeing the Dropkick Murphys at the House of Blues during their multi-night March Residency. END_OF_DOCUMENT_TOKEN_TO_BE_REPLACED

Sure, you might see a punk show on Monday and a chillwave band on Thursday and so on, but usually you favor one sound over another because you’re a busy bee and time is honey. It’s been the same for years, and the Prefab Messiahs can vouch. END_OF_DOCUMENT_TOKEN_TO_BE_REPLACED