This man is not the suspected Virginia gunman. After the shooting, a widely shared photo said he was.

On April 26, Sherman Lea Jr., the executive director of New Hope Support Services and a board member of the Roanoke City Public Schools Foundation, posted a photo of himself at a local restaurant with WDBJ anchor Chris Hurst and reporter Alison Parker.

Parker was killed Wednesday morning, along with cameraman Adam Ward, during a live television broadcast.

I am not Vester Lee Flanigan

Though many of the original social media posts identifying the photo of Lea as Flanagan have been deleted, some international media outlets still feature the photo, and screenshots of the erroneous posts are circulating. 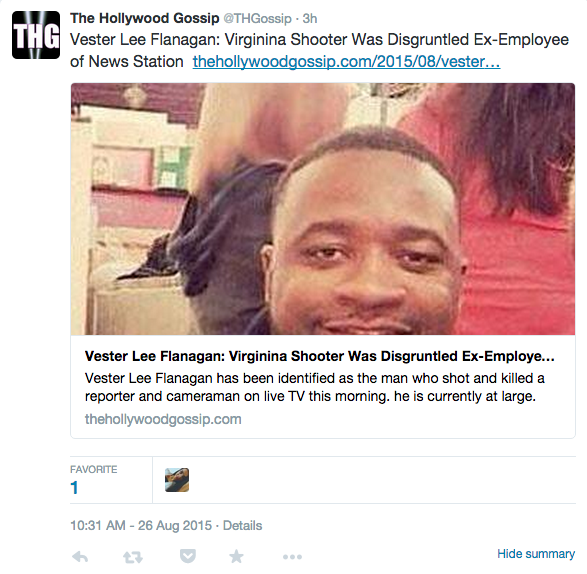 @ShermanLeaJr most places at least delete it when they make a mistake, but this woman hasn't deleted her tweet yet. pic.twitter.com/paOuWAHb0C

As the New Republic notes, PhillyVoice has added a correction to their story, and authors from Hollywood Gossip and The Wrap acknowledged the error on Twitter.

@rkearney was an error and removed

@rkearney The photo has been corrected. Several media outlets ran that as a pic of Flanagan, and I followed suit. Apologies for the error.

The Twitter account for political blog Politiwhat initially reacted skeptically to people questioning their posting of the photo but apologized when the error became clear. 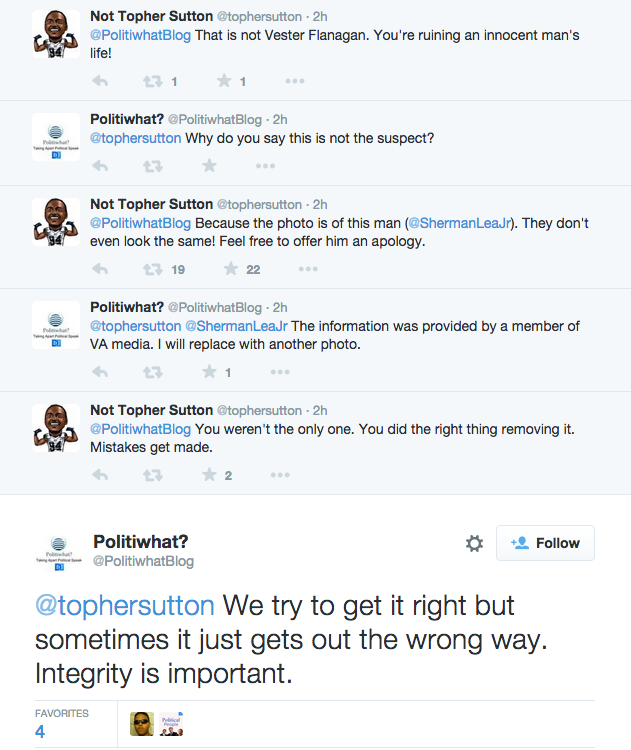 When reached for comment, Politiwhat’s owner said he originally saw the post from Connecticut meteorologist Matt Scott, who posted the photo of Lea with the caption “This is suspect in WDBJ7 murder — ID’d by VA Police as Vester Flanagan, former employee. To his left, Alison Parker.” Politiwhat provided a screenshot of the post. 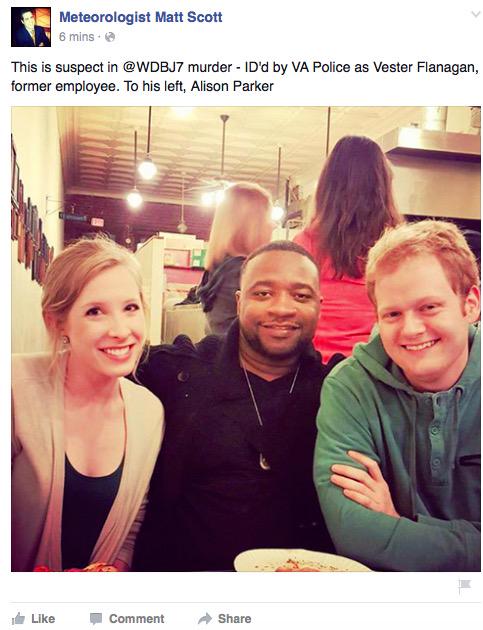 “As media, whether blog or national, fast moving stories have mistakes,” he said over Twitter direct message. “When mistakes are found, it is imperative to acknowledge the error and ensure the correction.”

Corinne Geller, public relations director for the Virginia State Police, said in an email that the claim that the photo was released by police was false.

Lea’s situation is familiar to those who remember Sunil Tripathi, the former Brown University student misidentified as a suspect in the Boston Marathon bombing before being found dead in Providence, Rhode Island eight days after the attack. And just over a week ago, Australian Sunny Burns was misidentified by Internet sleuths as the man behind a bombing in Bangkok, Thailand that killed 20 and injured 125.

Alexis Madrigal, the editor-in-chief of Fusion, a multi-platform media company and cable network, excoriated the online speculation and misinformation machine in a 2013 Atlantic article about the Marathon bombings.

“This is vigilantism, and it’s only the illusion that what we do online is not as significant as what we do offline that allows this to go on,” Madrigal wrote. “This is not how civil society works. There is a reason that police have procedures around investigations and evidence. Due process is important.”

A link to The New Republic has been added to this post.