Sh**-Faced Shakespeare Comes to Somerville to Deliver a Drunken Soliloquy 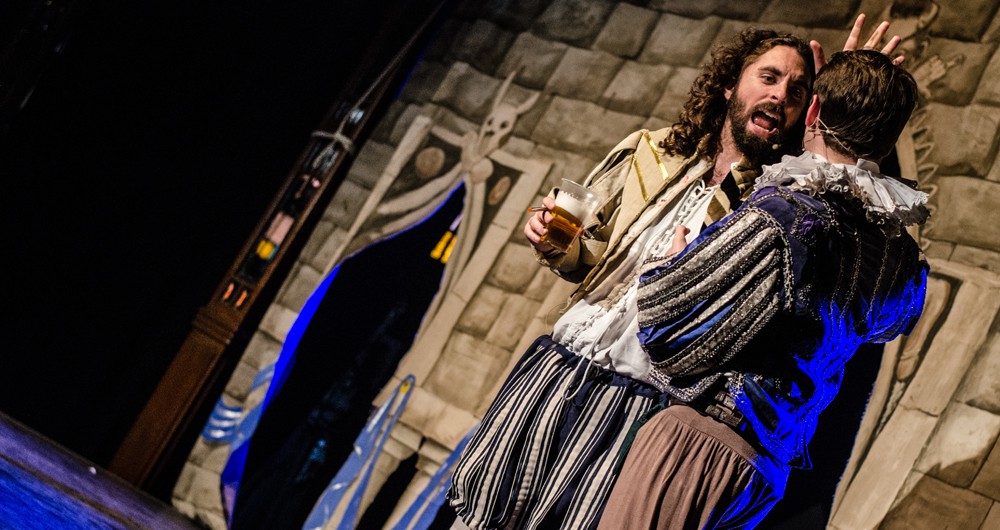 For nearly 20 years, families, friends and first dates have flocked to Boston Common in the summer for an evening of William Shakespeare’s finest. There’s still a few months left before then, but that’s alright. Why? Because a company of Shakespearean actors from the United Kingdom is coming, to paraphrase the Bard himself, to “drink themselves out of their five senses” on a nightly basis here in Boston.

From April 10 to May 1, Magnificent Bastard Productions will put on 18 performances of A Midsummer Night’s Dream at the Davis Square Theatre in Somerville. However, their interpretation of the play is slightly different than your typical show. It might have something to do with the abridged source material, but it’s mostly a direct result of the production’s title – Shit-Faced Shakespeare. 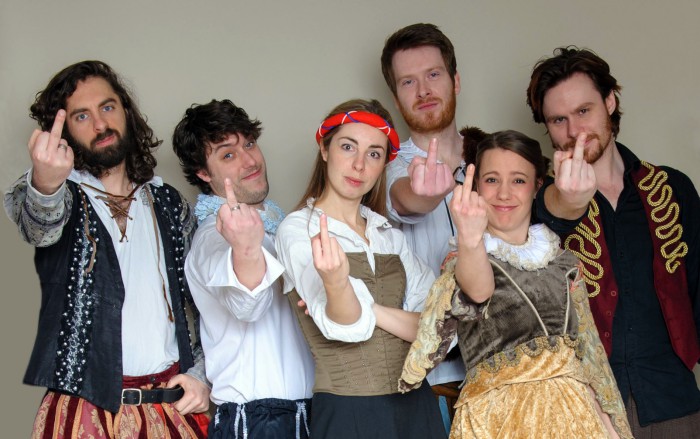 “This is what I do. I get drunk and do Shakespeare, professionally,” says Lewis Ironside, who concocted the idea with friend and fellow actor Christopher Snelson after a night out at the local pub.

The idea is simple: take a company of professional actors, get one of them utterly smashed on the drink (or drinks) of their choice, then put on one of Shakespeare’s plays while maintaining inebriation. What results is a bona fide night of well-done theater, combined with some improvisation spurred by the boozy antics.

Shit-Faced Shakespeare came to be not too long after Ironside and Snelson left that pub and sobered up. They initially tried a slew of other ideas they’d had, including a run of absinthe-themed shows that – you guessed it – revolved around the famous green fairy. When that didn’t work, the Shakespearean actors returned to their roots.

“We started the show in 2010, and it’s just gotten bigger and bigger since then,” says Ironside.

For five years the show has sold out performances and earned numerous accolades at fringe festivals in Brighton and Edinburgh, the latter being the largest performing arts festival in the world. They’ve had phenomenal success all over the UK, and video clips and interviews can be found all over YouTube.

According to American Theatre Magazine, similar alcohol-themed Shakespeare plays are popping up across the country in New York, Chicago and Los Angeles. Even Portsmouth, New Hampshire’s own Seven Stages puts on ShakesBEERience since 2012. Boston is notably absent from this list, but that’s all about to change.

Enter Gabriel Kuttner, a 20-year veteran of the Boston theater scene and head of the Davis Square Theatre. The arts education advocate is always on the lookout for new ways to make the Bard “relevant and exciting again,” so when he heard about Shit-Faced, he contacted Ironside to discuss the possibility of bringing it overseas. 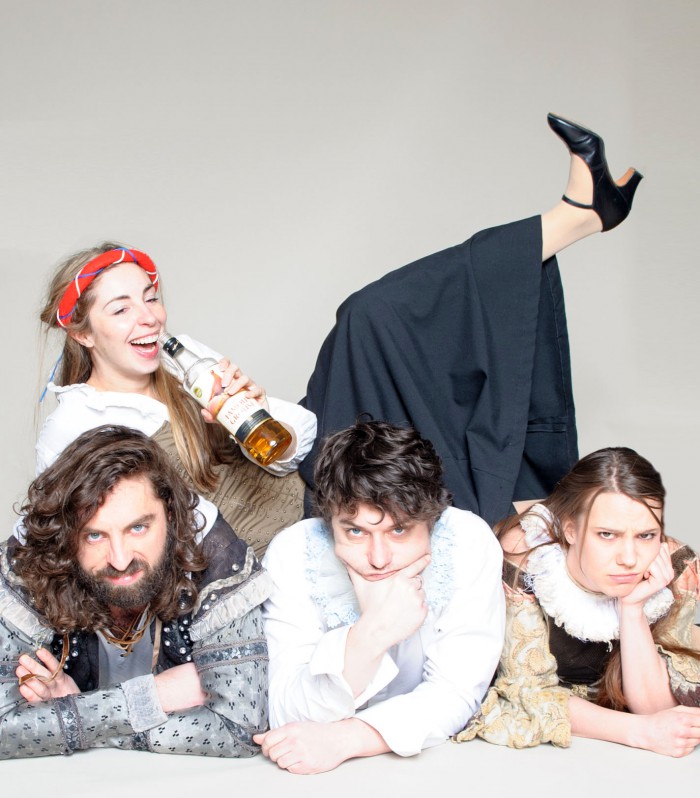 “I was fortunate that [Ironside] decided to give me a crack at it,” says Kuttner. “We decided to partner together 9 or 10 months ago and we’ve been putting together the pieces, trying to figure out how to do this.”

That such a combination of dramatic storytelling and slapstick humor would premiere at Kuttner’s theater makes perfect sense, as it’s one of the greater Boston area’s best venues for staged drama, stand-up comedy and live music under one roof. Besides, where else would Shakespeare’s characters get together for a few rounds than either the nearby Saloon or the Foundry on Elm?

“At the center of it is a really, really strong, solid production of A Midsummer Night’s Dream with truly terrific actors. You just introduce this unique obstacle for the sober actors, which just adds a fun layer to it.”

When asked about the show’s success in the UK, Daniel Berger-Jones – Kuttner’s producing partner and the founder and president of Cambridge Historical Tours – agrees wholeheartedly with this sentiment.

“It’s a really good piece of Shakespeare done by extremely talented, professional actors who can take slapstick and make it genuinely funny without alcohol. But when you throw them another obstacle? The big obstacle of the play is one of your actors is hammered.”

It’s because of the careful craftsmanship Ironside and his collaborators have put into scripting, developing and rehearsing Shit-Faced Shakespeare that Kuttner and Berger-Jones think it will translate successfully here in the United States. And not just your run-of-the-mill theater attendees, but – as Berger-Jones puts it – “the $20 ticket crowd.”

“To get the people who would say it’s sacrilegious to Shakespeare to come out and see it and admit, ‘OK, that was actually a really well done production of Shakespeare in general.’ And then to get the other crowds who are only in it for the beer to go, ‘Wow, I never knew I liked Shakespeare.'” 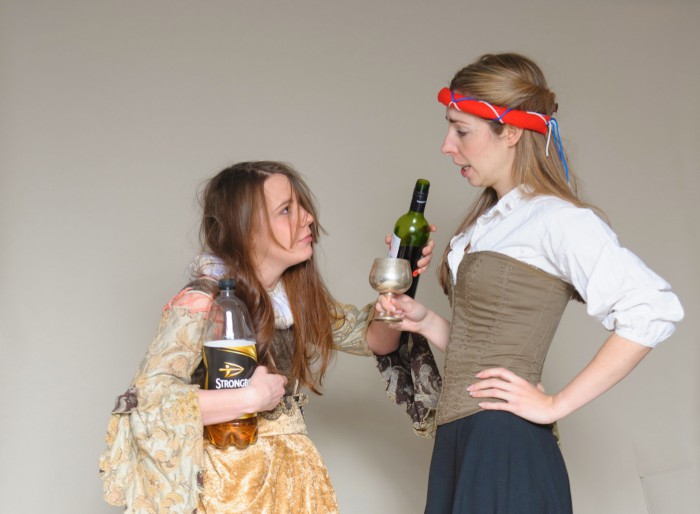 Ironside, who has family in Boston, couldn’t agree more with Berger-Jones.

“We’ll get audiences now that will come and watch the shows while mostly drunk. We can do maybe 10 whole minutes of Shakespeare that’s really well done and really well directed – because of the understanding, the skill of the actors, and the physicality. And then the drunk comes back and the audience goes, ‘Oh, we forgot there was somebody pissed in this show!’ They’ve been off for a costume change, a wee, a cigarette, have brought the cigarette on, and there’s a fire extinguisher.”

Theater, after all, should be more of an experience than a passive event. When Shakespeare’s plays were first performed for crowds during the late 1500s, they weren’t standing idly by while the action unfolded on stage. They’d laugh, gasp and scream at the players on the stage. Half a millennium later, Boston can do better.

END_OF_DOCUMENT_TOKEN_TO_BE_REPLACED

Enter to win a pair of tickets to attend The Hess Collection Seminar and Dinner as part of Boston Wine Festival 2018 at the Boston Harbor Hotel on Wednesday, March 14th. END_OF_DOCUMENT_TOKEN_TO_BE_REPLACED

I referred to it as the “best kept secret” in Boston arts for the holidays. END_OF_DOCUMENT_TOKEN_TO_BE_REPLACED

Boston’s arts scene shines at this time of year. END_OF_DOCUMENT_TOKEN_TO_BE_REPLACED

It’s so much more than a holiday show. END_OF_DOCUMENT_TOKEN_TO_BE_REPLACED

Rock for a cause this holiday season. END_OF_DOCUMENT_TOKEN_TO_BE_REPLACED

Get out and see a show this holiday season, and save some money when you do. END_OF_DOCUMENT_TOKEN_TO_BE_REPLACED

You can help give the gift of music to kids in need this holiday season. END_OF_DOCUMENT_TOKEN_TO_BE_REPLACED