Seriously? Hip-hop is as homophobic as ever 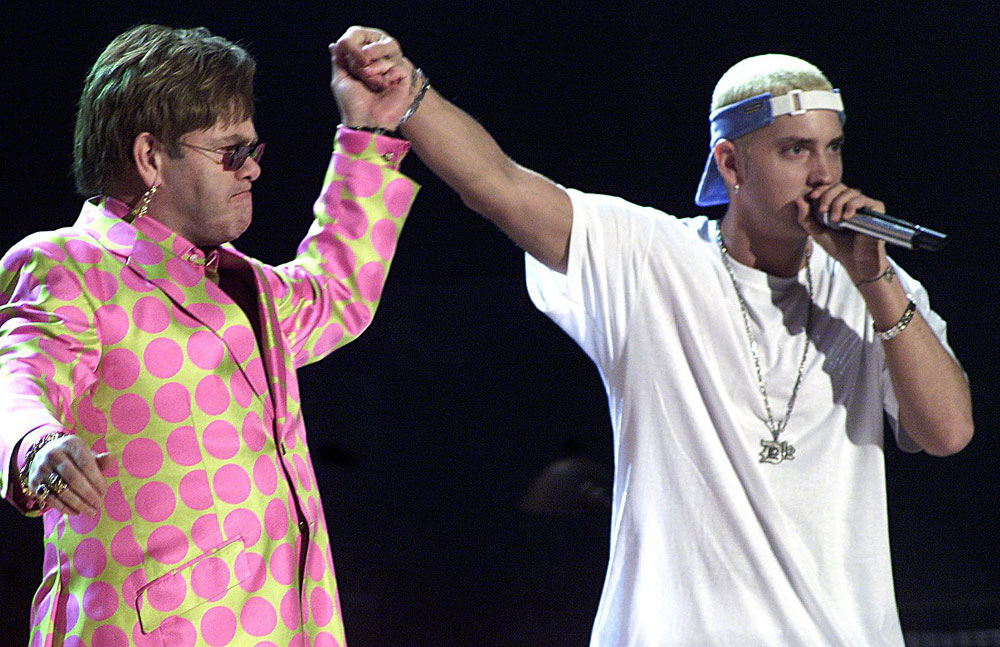 It’s 2013 and yet, homophobic slurs are still all over hip-hop, with Eminem and Tyler, the Creator at the forefront. It’s time to stop it.

In a recent interview on Arsenio Hall, Tyler, the Creator addressed his use of the word “faggot.” The Odd Future rapper-producer said that since he’s friends with Frank Ocean, the singer who came out as bisexual in 2012, he cannot be homophobic himself. Tyler says this “f-word” is just another word — that it can only hurt you if you let it. That’s bullshit. Tyler, the Creator has no ownership of the word “faggot” and cannot decide its proper use or definition.

And it goes beyond his songs. Tyler also drops the slur regularly in his social media posts, which sets a terrible example. The artists in his Odd Future collective are some of the most buzzed about hip-hop stars in the last decade and have developed a huge following, especially with younger hip-hop fans. If these kids see Tyler, the Creator using the “f-word” and telling everyone it’s “no big deal,” these impressionable followers will think using the homophobic slur is acceptable. It will only perpetuate the problem.

This doesn’t end with hip-hop’s new class. After nearly 20 years in the game and eight solo LPs, Eminem probably should have matured by now, but nope: He hasn’t learned from past mistakes. The Detroit rapper has had a public battle with his homophobia — most notably, calling out Elton John, then performing with the legendary singer at the 2001 Grammy Awards to basically show everyone he isn’t an asshole. Then, after releasing more albums filled with homophobia, Eminem publicly stated in 2010 that he supports gay marriage. And yet, his new album “The Marshall Mathers LP 2” still contains “f-word” drops. He covered the topic in a Rolling Stone interview with Brian Hiatt, due out in the next issue:

HIATT: You’ve made it clear again and again that you don’t actually have a problem with gay people. So why, in 2013, use “faggot” on that song? Why use “gay-looking” as an insult?

EMINEM: I don’t know how to say this without saying it how I’ve said it a million times. But that word, those kind of words, when I came up battle-rappin’ or whatever, I never really equated those words . . .

EMINEM: Yeah. It was more like calling someone a bitch or a punk or asshole. So that word was just thrown around so freely back then. It goes back to that battle, back and forth in my head, of wanting to feel free to say what I want to say, and then [worrying about] what may or may not affect people. And, not saying it’s wrong or it’s right, but at this point in my career – man, I say so much shit that’s tongue-in-cheek. I poke fun at other people, myself. But the real me sitting here right now talking to you has no issues with gay, straight, transgender, at all. I’m glad we live in a time where it’s really starting to feel like people can live their lives and express themselves. And I don’t know how else to say this, I still look at myself the same way that I did when I was battling and broke.

Someone needs to get Eminem a thesaurus ASAP if faggot is the only word that comes to his mind. If he really wanted to mean “bitch or punk,” then he would say bitch or punk (although “bitch” is hardly an improvement).

Macklemore’s hit “Same Love” is right on the money when the Seattle rapper says, “If I was gay, I would think hip-hop hates me / Have you read the YouTube comments lately? / ‘Man, that’s gay’ gets dropped on the daily.” Indeed, “faggot” is thrown around way too much online and the problem goes beyond Tyler, the Creator and Eminem. It’s in our society’s blood.

We must take the small steps to fix this. Call out the next person you hear drop the “f-word.” Don’t let it slide. Show them that it’s hurtful and disrespectful and hopefully, they will learn. We can erase this word from our society.

[Side note: For those wondering about Sia, the openly queer singer featured on Eminem’s track “Beautiful Pain,” she has vowed to donate all of her royalties from working with the star rapper to homeless LGBT youth at the Los Angeles Gay & Lesbian Center.]

Enter to win tickets to see Trio Da Kali at The Villa Victoria Center of the Arts (Newton, MA) on April 10th. END_OF_DOCUMENT_TOKEN_TO_BE_REPLACED

END_OF_DOCUMENT_TOKEN_TO_BE_REPLACED

Enter to win tickets to Rhye at The Paradise on February 28th. END_OF_DOCUMENT_TOKEN_TO_BE_REPLACED

Her new album has been pushed back, but we have Kimbra’s new single for you. END_OF_DOCUMENT_TOKEN_TO_BE_REPLACED

The folk duo returns with a new record this week. END_OF_DOCUMENT_TOKEN_TO_BE_REPLACED

Now that we’re done looking back at 2017, let’s look ahead at 2018. END_OF_DOCUMENT_TOKEN_TO_BE_REPLACED

Our first Song of the Week for 2018. END_OF_DOCUMENT_TOKEN_TO_BE_REPLACED

In a year when so many things were off, the music was right on. END_OF_DOCUMENT_TOKEN_TO_BE_REPLACED