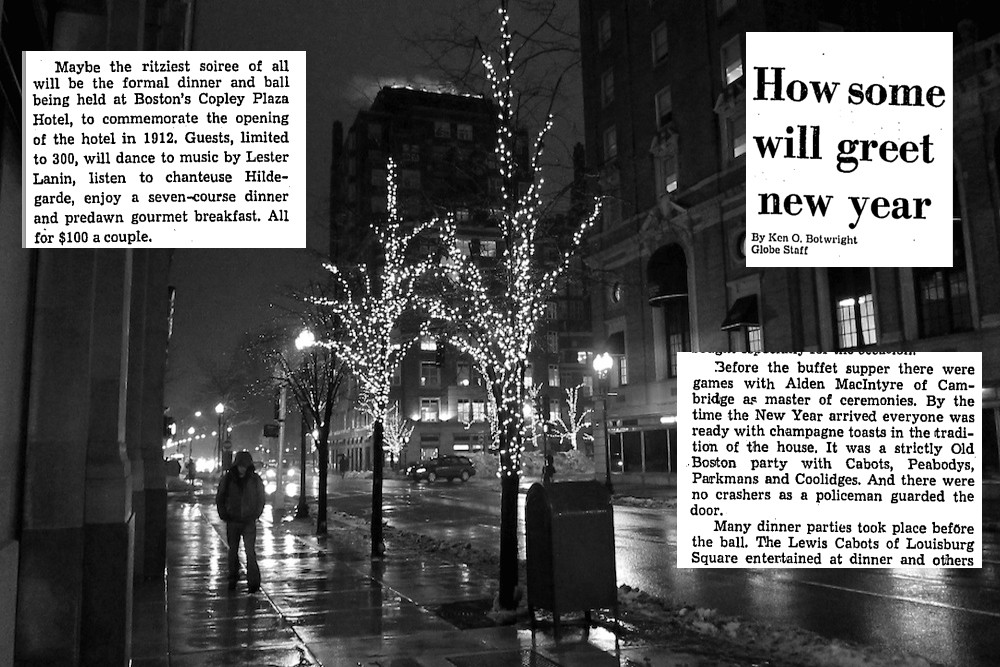 It’s a post from the Missed Connections section of Craigslist Boston that tells a beautiful story of a life-saving coffee date, and it recently began making the rounds. It first surfaced on the Boston section of Reddit, as well as Universal Hub.

By Friday afternoon, a variety of media outlets were writing about the post, and public figures including the likes of CNN’s Jake Tapper and actor Russell Crowe shared it on social media.

But as Boston.com writer Kristin Toussaint noted in her article, the whole thing reads like a fairy tale:

Many of the outlets that shared the story noted their skepticism as well. Metro started their writeup with, “If this is true, it’s really beautiful.” BoingBoing wrote, “I have spent so much of my life tangled up in blue, I don’t care if this story is true or not. It is great.” But that hasn’t stopped Internet sleuths on Reddit and lifelong Bostonians from combing over every sentence of the piece to poke holes in its narrative.

Here’s a point-by-point investigation into the veracity of “New Year’s Eve 1972.”

1. It reads like fiction, and is very similar to other Craigslist Missed Connections fiction.

Before diving too deeply into a word-by-word rebuttal of the anonymous author’s experiences, let’s just clear this up right now: The post as written is a touching piece of prose that nonetheless smacks of inauthenticity.

Though there are differences in the two stories, “New Year’s Eve 1972” shares similarities to a story about Thanksgiving in 1973 that showed up on the Missed Connections section of Craigslist New York. In 2013, The Village Voice tracked down the author of another Craigslist short story about happenstance romance on the city’s subway. It was written by Raphael Bob-Waksberg, the creator and showrunner of the depressingly dark comedy BoJack Horseman on Netflix. RBW said he had nothing to do with this one, though.

@sreddi_515 I'm flattered you think I know enough about Boston to write something like that.

2. Who uses The New York Times‘s “Words of the Day” to write a memory?

One of the most frequently cited sentences that set off b.s. detectors is this one:

“Patina” is defined as “a thin usually green layer that forms naturally on the metals copper and bronze when they are exposed to the air for a long time.” It can be used to describe layers of something more figurative, with Merriam-Webster noting synonyms can include air, aura, atmosphere, and mood. “Coagulated” is a mostly medical term meaning “clotted or congealed.”

So the sentence roughly translates to: “I hoped it might ease the guilt in my heart.”

Why wouldn’t a man in his 60s writing an anonymous tale of heartbreak just say that? A first-year creative writing student might use those highfalutin terms, but it feels inauthentic. If you want to read seemingly heartfelt memories from decades past, the place to look is (strangely) the YouTube comments of old songs, as cataloged by the site Sad YouTube. 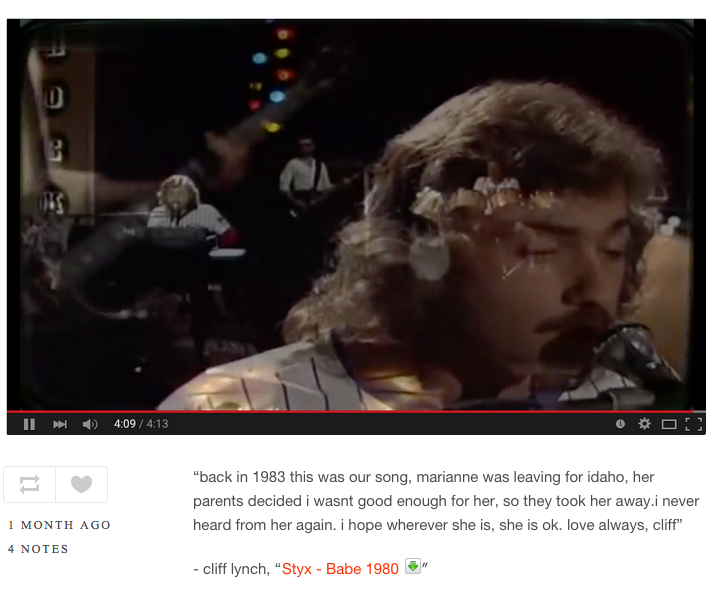 Verdict: The story’s patina of inauthenticity is coagulating.

In the second sentence, the narrator writes that “One week prior, at the behest of Richard Nixon and Henry Kissinger, I’d flown four B-52 sorties over Hanoi. I dropped forty-eight bombs.”

That likely refers to the Operation Linebacker II, a Navy and Air Force bombing campaign that ran from December 18-29 that featured heavy bombing of North Vietnam in an attempt to force peace talks.

According to several sources, including author Thomas Wictor, the carrying capacity for the B-52 Stratofortress is significantly higher than the 12 bombs per load the narrator says he dropped. Given that the campaign used “air power to its maximum capabilities” and most of the planes were flying from Guam, not filling the plane to capacity makes no sense.

Furthermore, Wictor points out that going from bombing Vietnam to living in a Boston apartment in a little over a week seems highly, highly unlikely:

“Finally, the fake bomber pilot said that he was discharged (separated) from the Air Force and back in Boston within a week. The B-52s used in Operation Linebacker II flew out of either U-Tapao Royal Thai Air Force Base, Thailand, or Andersen Air Force Base, Guam. Therefore the writer would’ve had to turn in all his gear, fill out the paperwork, wait for it to be approved, and then fly to an Air Force separation center in the continental US. The closest such center to Boston is Seymour Johnson Air Force Base near Goldsboro, North Carolina.

So the pilot mustered out of the air force, flew to North Carolina, was separated, made his way to Boston, and found a studio apartment, all in a week.

4. The details about New Year’s Eve in Boston are actually pretty spot-on.

One of the top comments on Reddit questions the idea of someone being out in a ball gown when the temperature is so cold.

But people have been braving the cold in inappropriate outfits on New Year’s for a long time. And before Boston’s annual First Night celebration got its start in 1975, balls were all the rage among high society types.

Here’s a piece from the Boston Globe archives reflecting on 1972’s social trends. It even mentions the Cabots, one of the families the narrator suggests that the woman in teal is about to marry into: 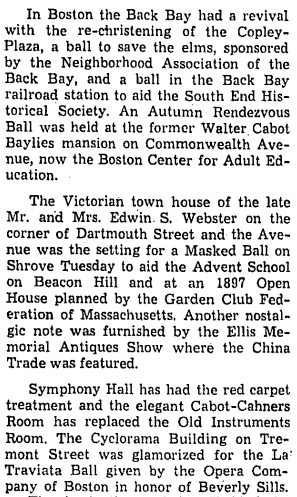 And here’s an excerpt from a December 29 Globe article about New Year’s plans around Boston. 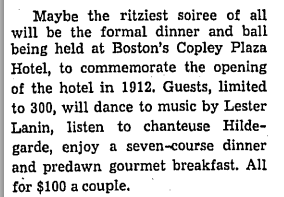 Finally, here’s a January 1 recap of another ball that took place at 44 Brimmer Street that was attended by members of the Cabot family. 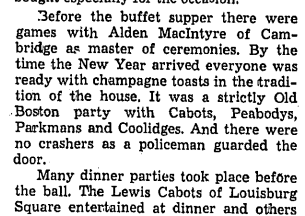 From there, the walk to the Old State House is about 20 minutes.

And the walk to Neisner’s from the Old State House is only four minutes, a totally reasonable distance for them to dash in the rain. 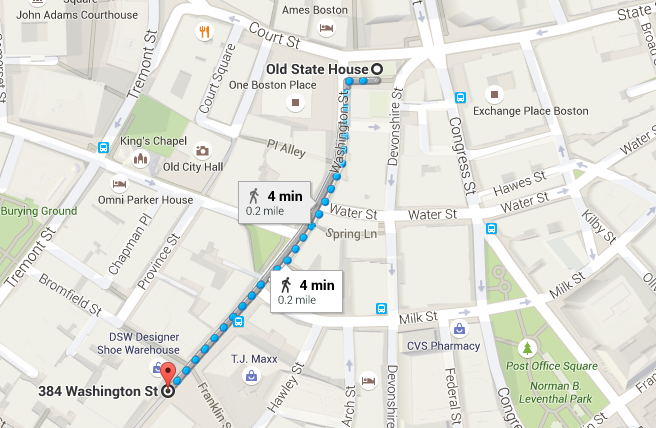 …But what about the rain?

5. It was raining in Boston that day, but could you call it “a deluge”?

According to weather data pulled by Wolfram Alpha, a smart search engine that pulls from trusted archival sources, it rained almost 3/4 of an inch in Boston on December 31, 1972. Here are the times that the rain peaked:

We know based on the story that by the time our narrator drunkenly wandered down to the Old State House, it was probably evening. Drinking a fifth of Tennessee whiskey is not necessarily a quick endeavor. So when he talks about the rain quickly moving from a drizzle to a shower to a deluge, it could have been sometime between 10 and 11 p.m.  A quote from the Globe article about the Brimmer Street party says guests arrived at 10 o’clock sharp, but many dinner parties were hosted by party guests nearby prior to the ball.

So could our teal dress woman have strayed behind as her fiancé-to-be left their dinner party for a ball? Maybe.

Verdict: Cloudy with a chance of deluge.

But that leads to a final question…

6. Would a department store’s lunch counter have been open that late at night on New Year’s Eve?

One of the commenters on Universal Hub pointed out that Massachusetts Blue Laws were still largely in effect in 1972, meaning many types of businesses were banned from opening on Sundays. As it so happens, December 31, 1972 was a Sunday.

Advertisements from the Globe archives that ran on December 29, 30, and 31 show that similar department stores like Lechmere, Lane Bryant, and Jordan Marsh were closed Sundays. Jordan Marsh’s flagship at 450 Washington Street was only a block away from Neisner’s 384 Washington Street location. 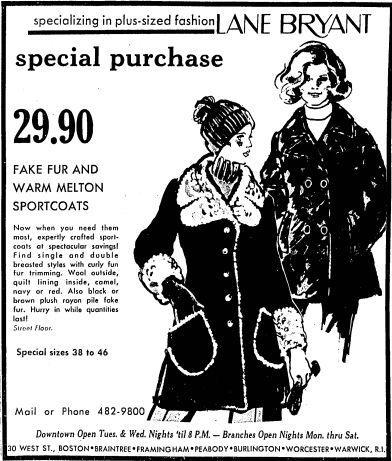 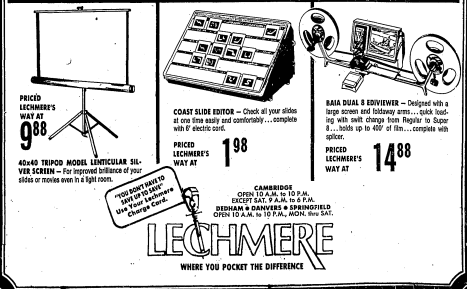 There were exceptions, however. Some are listed in Ellen Goodman’s October 21, 1972 Globe article on Blue Laws and the radical-at-the-time concept of observing holidays on Mondays.

But Neisner’s was a large nationwide department store that sold all sorts of goods. Unless they employed another trick used by some stores by closing Saturday instead of Sunday—a practice often used by Jewish shop owners who observed the Sabbath that day—Neisner’s was likely closed.

Furthermore, even a 1975 Globe article called “The old Blue Laws — they ain’t what they used to be…” that listed the many exceptions to the Blue Laws said that “most supermarkets and department stores remained closed.” This left shopkeepers fuming as stores just over the border in New Hampshire advertised to Massachusetts residents about their Sunday hours. 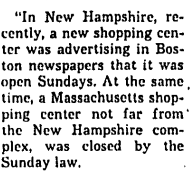 By 1977, Governor Michael Dukakis began to lift some of these restrictions, signing a bill in November of that year allowing for holiday shopping on the four Sundays between Thanksgiving and Christmas. But that still wouldn’t have covered New Year’s Eve. And just one year earlier, when Massachusetts voters approved a non-binding referendum repealing all Sunday closing Blue Laws, a number of department stores owned by Zayre Corp. decided to stay open on Sundays. They were prosecuted by police, and when they attempted to bring the case to the Supreme Court, the court sided with the state. Fun fact: Both Neisner’s and Zayre Corp. were later sold to the competing Ames Department Stores Inc.

7. Multiple women claim to be the lady in teal

Almost immediately after “New Year’s Eve 1972” began taking the Internet by storm, a response from the lady in teal appeared in the Missed Connections Boston section:

Could it be? True love, rekindled on Craigslist 42 years later? She certainly writes like her long-lost beau, what with the recesses of her poor soul permeated by pangs of shame over breaking her brave soldier’s patina-coagulated heart. But alas, she misspells Neisner’s several times in her extremely lengthy story, which doesn’t bode particularly well for the story’s veracity.

Then, a day later, another, shorter reply appeared.

What appears to be a mishmash of nonsense words on first blush is actually an elegantly constructed Cinderella story. But come on, are we really discussing this? The chances of either of these responses being the long-lost lady in teal instead of an aspiring creative writing major at Emerson are basically zero. They also haven’t responded to requests for comment.

In the end, whether “New Year’s Eve 1972” is true or not doesn’t really matter.  What matters is that “New Year’s Eve 1972” is a piece of writing that has something for everyone. It’s a story of fleeting romance that gives optimists a reason to believe in happy endings and skeptics a reason to dig deep into the history of a city that has existed for nearly 400 years but changed so much even in the last 40. 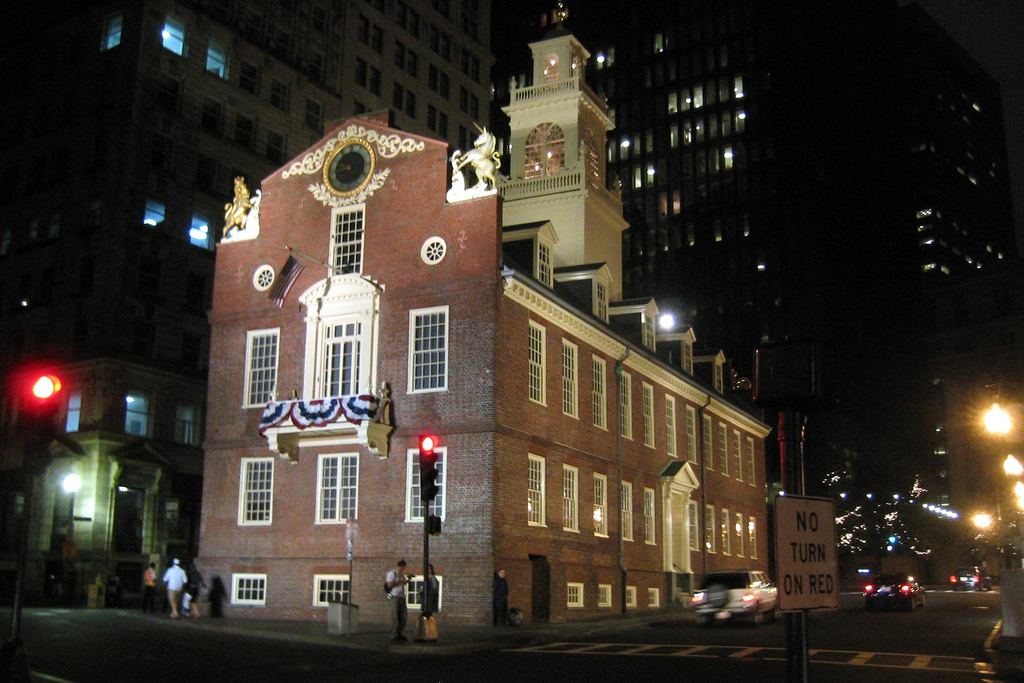