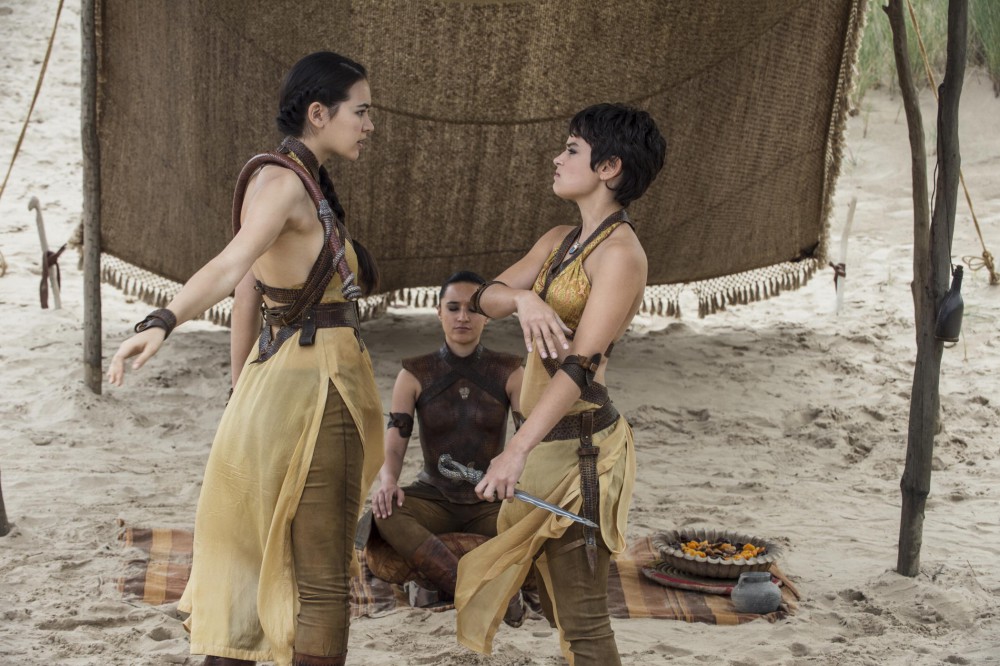 SPOILER ALERT: Major plot points of Game of Thrones are revealed in this post.

The Sand Snakes made their much anticipated debut on Sunday’s Thrones. And if their spear-throwing skills are any indication of what’s to come, the Lannisters should get ready to suck out some venom.

So far, we’ve only been introduced to Ellaria Sand—the paramour of the late Oberyn Martell and mother of their eight bastard daughters. In the season premiere, Ellaria approached Prince Doran Martell in the Water Gardens of Dorne, expressing her desire to torture the captive Myrcella Baratheon. The very person Jaime Lannister and Ser Bronn are traveling to Dorne to rescue.

After sailing ashore at night and falling asleep on the beach, Jaime wakes up to find Bronn bringing a sword down towards his head—killing a red viper. Merely a coincidence that Oberyn Martell was referred to as “The Red Viper of Dorne”? I think not!

This brush with death results in both men waxing poetic about how they’d like to go—in a deathbed watching his sons grovel over his fortune for Bronn, in the arms of the woman he loves for Jaime—until a legitimately lethal scenario presents itself. A battle breaks out between Jaime and Bronn and four Dorne soldiers on horseback.  A sword to Jaime’s prosthetic hand later, the soldiers are killed and a new mode of transportation presents itself.

“These Dornean stallions can ride day and night without tiring,” Bronn says. “We’ll ride to the Water Gardens with a nice breeze on our face.”

Not if it was up to the Sand Snakes.

Returning home for the first time since meeting with Prince Doran, Ellaria reunites with three of her daughters: Tyene, Nym and, the baddest chick of them all, Obara. She asks her mother if war is at hand and Ellaria responds that Doran refuses to do anything but weep for Oberyn. They’ll have to avenge his death on their own. Obara reminds her that they have no army to march against the Lannisters without Doran’s support but Ellaria isn’t having any of that.

“We have a problem,” Obara says, cracking her whip and knocking over a barrel to reveal a man buried up to his neck in sand. “This ship captain found me in Planky Town, telling me he had information to sell. He told me he smuggled Jaime Lannister into Dorne.”

The Sand Snakes realize Jaime is in Dorne to rescue his daughter (…and niece).

“If he gets to her before we do,” Ellaria tells her daughters. “We lose our only chance for revenge. We must choose. Doran’s way and peace. Or my way and war.”