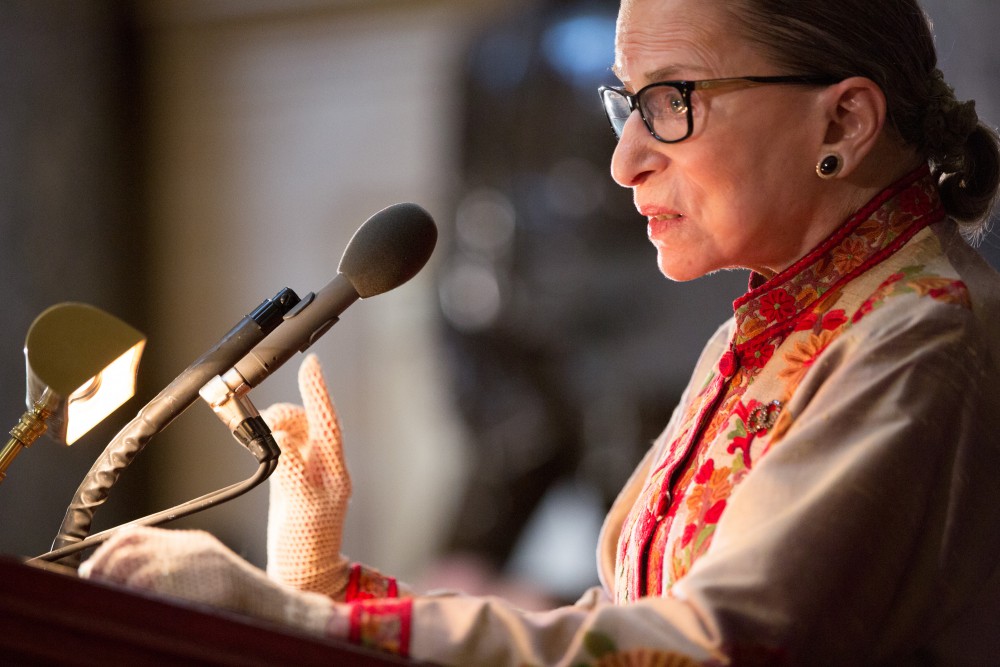 Supreme Court Justice Ruth Bader Ginsburg probably already has plans for Passover, but you can bring a little of your favorite female politician to the table this year with a new piece she wrote for the American Jewish World Service. Hey, that’s more RBG than you were betting on, right?

In collaboration with DC-based rabbi Lauren Holtzblatt, Ginsburg wrote about the story of Exodus that inspires the holiday, explaining:

The stories we tell our children shape what they believe to be possible—which is why at Passover, we must tell the stories of the women who played a crucial role in the Exodus narrative.

The story traditionally places a focus on Moses and the Jewish slaves defying the Egyptian pharaoh and escaping slavery, but Ginsburg encouraged those celebrating this year to place equal importance on the women who struggled to break free from the Pharoah’s rule. She pointed to Yocheved, Moses’ mother and his sister Miriam, both of whom took a stand alongside Moses. Also cited were midwives Shifra and Puah, who refused to kill Israelite babies when ordered to by the Pharaoh.

Retelling the heroic stories of Yocheved, Shifra, Puah, Miriam and Batya reminds our daughters that with vision and the courage to act, they can carry forward the tradition those intrepid women launched.

According to Ginsburg, select Egyptian women deserve a shout out every Passover, as well. The Pharaoh’s daughter Batya deliberately defied the rule of her father by taking the baby Moses from the Nile River, daring to transgress in a society that would never allow it. Ginsburg concludes with a concise summation of her point:

Women of action who have a vision? Sounds like a certain Supreme Court Justice we know.

While many have called out Davis since a video of her refusing to issue a marriage license to Rowan County residents David Moore and David Ermold went viral in July, relationship columnist and gay activist Dan Savage went a step further on MSNBC Tuesday night, saying that “this is about someone hypocritcally looking to cash in”. He added: “And she is a hypocrite.” END_OF_DOCUMENT_TOKEN_TO_BE_REPLACED

END_OF_DOCUMENT_TOKEN_TO_BE_REPLACED

David Filipov was part of the team that headed up the Boston Globe/Fox25 Olympic Debate last night. He offered his takeaways and analysis after an update on the latest exchange between Governor Baker and the USOC. All in all, our conversation does a pretty good job of getting you up-to-speed on all things Boston2024. END_OF_DOCUMENT_TOKEN_TO_BE_REPLACED

END_OF_DOCUMENT_TOKEN_TO_BE_REPLACED

I’m in my mid-twenties, and I’ve been working as a substitute teacher for the last couple years (I joined Teach for America right out of college). I know some of the girls in classes I teach have crushes on me — high schoolers aren’t very subtle — but I brush it off, because I’m not an idiot. Last week, however, I got a disturbing email from a girl in the English class I subbed for. Pictures were attached. You get the gist. What do I do about this situation? I obviously haven’t responded, but I’m afraid she might go Lifetime-movie on me. END_OF_DOCUMENT_TOKEN_TO_BE_REPLACED

Ridiculous doesn’t even begin to capture all that transpired, from the storm of emojis to the storming and barricading of Jordan’s house by a cavalcade of Clippers. END_OF_DOCUMENT_TOKEN_TO_BE_REPLACED

END_OF_DOCUMENT_TOKEN_TO_BE_REPLACED

My friend has a dog, and she’s always been kind of half-assed about caring for it. I’ll see her out at a party or a barbeque all day long, so I know the dog is home alone, and sometimes she goes out right after she finishes a shift (she’s a waitress, so that might be pretty late), without even going home to feed the dog or let it out. The other day, though, I went over to her house and realized things have crossed a line. There were piles of dog feces in a couple of corners, and the entryway rug was soaked in urine when we walked in. She laughed it off and called the dog naughty, then cleaned up the poop and basically ignored it. I’m worried about the puppy, and about my friend; what kind of person does that to an animal? Should I call animal control on her? END_OF_DOCUMENT_TOKEN_TO_BE_REPLACED