A woman shared a graph of her orgasm online for science. Then the reactions rolled in.

Jess, known on Reddit as noveltysin, was curious to know how many calories she burned during the average love-making session with her partner. So, during one specific romp, she strapped on her Fitbit—the increasingly popular wristband accessory that can measure personal metrics like number of steps walked and heart rate—and engaged in the kind of exercise no gym can offer.

She was so fascinated by the results—and convinced that fellow Fitbit users and data nerds would find the kinesthetic output of sex interesting, too—that she shared a graph of them on the subreddit /r/DataIsBeautiful. 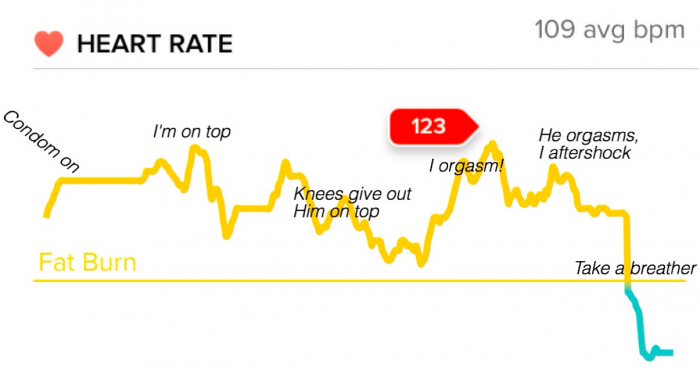 The trolls of Reddit went so far as to comment on her health, her partner’s performance in bed, and the female orgasm.

“I was curious about my heart rate during sex. So really, [I did it] for science,” Jess told Mic. But “[the comments suggest] a general mood that women can’t have quick, enjoyable sex without it being fake or a ploy.”

Though Jess might not share another graph of her sexual activity anytime soon, that doesn’t mean she’ll be apologizing about how she got her heart rate up.