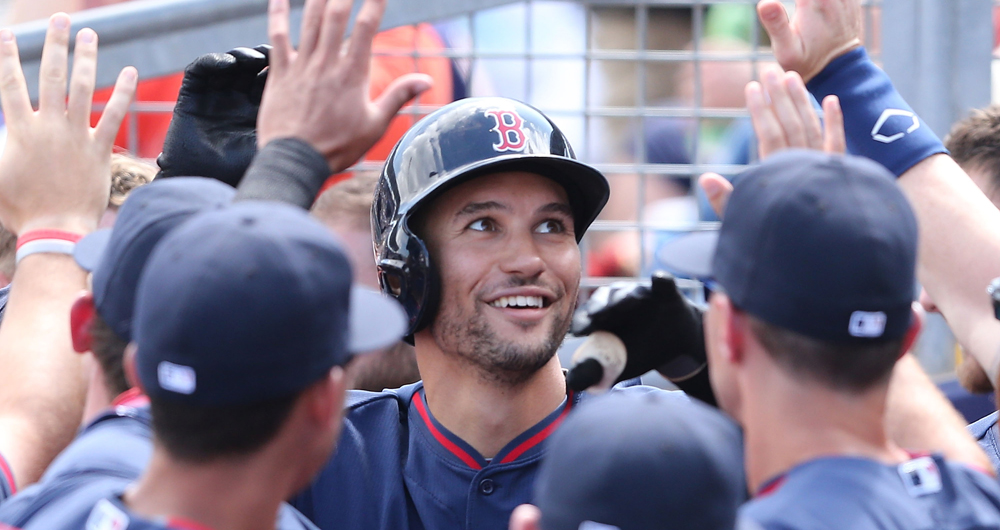 At last, it can categorically be classified as baseball season. You’d be hard pressed to find anyone, be they fans, players or sports yappers, who wants more spring training, which has proven to be the same interminable yawnfest it always is. This makes the fact that the Red Sox will finally open up their title defense on Monday against the Orioles in Baltimore so exciting.

I don’t know about you, but I can’t escape the feeling that last year was some kind of supernatural occurrence. The 2013 Red Sox run to a championship felt like a fever dream of truly metaphysical proportions, a unicorn of a baseball season. It was a fantasy that, as a fan, you didn’t ever want to wake up from.  Only then, when it was over and they’d won the whole thing, I didn’t want to go back to sleep, I just wanted to stay awake and revel in the complete elation that came with such a wonderful, out of nowhere surprise.

It’s tough to imagine the upcoming season even mildly resembling last year’s joyride, but now’s the time to really start getting into all the possibilities and speculation and so on. And as boring as camp has been (the biggest stories/manufactured controversies of the past six weeks have revolved around Grady Sizemore’s ascension to likely Opening Day centerfielder and whether or not David Ortiz’s inevitable contract extension represents a hometown discount), there remains a variety of topics to examine. Here are a few.

The Sox led the majors in runs scored last year, which is sort of hard to believe seeing as how the only Sox regulars to even approach a career year, let alone have one, were Daniel Nava and Jarrod Saltalamacchia. Mike Napoli finished with very respectable numbers (23 homers, 92 RBI, .842 OPS, 129 OPS+), but also struck out 187 times in just 498 at-bats and is a notorious streak hitter, going a good three months in the middle of the year without doing anything.

Will Middlebrooks was so lousy following his three-homer game against Toronto in the season’s first week that he was eventually farmed out and wound up posting a woeful OPS+ of 88, getting benched in favor of the light hitting Jose Iglesias and a rookie in Xander Bogaerts who had less than 50 major league plate appearances at the time.

From a numbers standpoint, the majority of the Sox position players ranged from fair to very good, with Ortiz naturally leading the way (.309/.959/30/103). These individual numbers, mostly no better than normal across the board, belied what you usually see in championship teams in that there are always at least a couple of guys who post something approaching career best stats (see Ortiz, Manny Ramirez, and Johnny Damon in 2004 and Dustin Pedroia and Kevin Youkilis along with Manny and Papi in 2007).

For last year’s Sox, the equalizer was timing. They walked off 11 times, won in the final at-bat 22 times and came from behind to win 36 times. So while it’s perfectly reasonable to assume that guys like Middlebrooks, and even Dustin Pedroia, who had a typically solid all-around season but was never quite himself after injuring ligaments in his thumb on Opening Day to the point he needed surgery following the World Series, will bounce back with better statistical seasons, it feels almost unimaginable to expect the same kind of incredibly timed heroics that marked the 2013 team. Should the Sox regress toward the mean and lose any of their collective prowess for producing in the clutch in 2014, a bump in consistency from Middlebrooks and Napoli, as well as at least an adequate replacement for Salty’s production from the A.J. Pierzynski/David Ross duo will be crucial.

For the most part, the Sox experienced very good fortune with their pitching staff in 2013. They received big, bounce back years from ace Jon Lester and one-time malcontent John Lackey, overcame Clay Buchholz’s annual two-to-three month injury and worked around the failures of/injuries to their first two choices at closer (anyone remember Joel Hanrahan and Andrew Bailey? You’re forgiven if you don’t) only to find a Cy Young-caliber replacement right in their setup corps in Koji Uehara.

It’s safe to assume that Lester, who took the proverbial “next step” in the postseason and could be pitching for a new contract if he and the Sox don’t settle on an extension before Monday, will be his usual horse-like self. And Buchholz, who was 9-0 with an ERA well under two through his first 12 starts before injuring himself so severely while napping with his infant daughter that he missed three months (side note: you can’t make some of these baseball injuries up. Buchholz’s sleeping injury can’t hold a candle to the malady that befell former Sox/Orioles/Twins infielder Marty Cordova, who went on the disabled list for burning himself in a tanning bed in 2002), has proven that when healthy, he’s outstanding, and even when he’s not 100 percent, like in the playoffs and World Series, he’s learned how to gut it out and pitch effectively.

The keys to the pitching staff will be whether Lackey can replicate his 2013 performance or if he’ll revert to the underachieving ways he showed during his first two seasons in Boston, which eventually resulted in Tommy John surgery. Also, it will bear watching to see if Jake Peavy and Felix Doubront can consistently anchor the back end of the starting rotation. And last but nowhere near least, there’s Koji, who posted one of the most dominant seasons by a relief pitcher in franchise history (101/9 K/BB ratio, 32 consecutive batters retired at one point, a 1.09 ERA and a mind-boggling 376 ERA+). Can he even come close to reproducing it at age 39?

There’s depth in the bullpen should Koji falter or get injured. Newly acquired Edward Mujica saved 37 games for the Cardinals last year, Junichi Tazawa is back, Andrew Miller, who was really coming on before tearing a ligament in his foot in July, is healthy and Craig Breslow, who was lights-out as a late inning lefty right up until the World Series, remains as well. But while it’s foolish to assume Koji will be the same guy this year as he was last year, even a moderate drop off won’t keep him from remaining among the top closers in the game.

So, you hear the one about Grady Sizemore? You know, the former All-Star and MVP candidate who hasn’t played in three years or accumulated more than 295 plate appearances since 2009? Unless you pay zero attention to the local sports scene, you have heard that one. And the bottom line is that even though awarding the starting center field spot to the revitalized Sizemore will likely at least temporarily result in top prospect Jackie Bradley Jr.’s return to the minors, it’s really OK. Some very, very Loud Voices in town who like to panic/freak out/create giant straw men as much as is possible will tell you that this is a massive mistake and that Bradley deserves his chance right now and that anyone expecting the Sizemore of 2005-2009 is an idiot (note: no one is expecting that, except maybe the previously mentioned straw men).

The truth is Bradley is 23 years old. He’s not going anywhere. He will be a major part of the Sox organization in the very near future and will undoubtedly have a chance to make an impact this year whether he’s out there on Opening Day or not. If Sizemore is really as good as he’s looked throughout camp, why not ride that out for as long as possible? And if Bradley winds up completely ruined by having to spend an extra few weeks/couple months on the farm (which he most likely will not) then he’s probably not so special anyway. Sizemore’s rise is a no-lose situation for everyone involved, even Bradley. Some extra seasoning in Pawtucket will not hurt him at all if it does come to that, especially if you look closely at his numbers with the Sox from last year and so far this spring.

Again, if the Sizemore or Bradley question is really the biggest story in camp, then the Sox are beyond lucky. No one has been seriously injured, no one has shot his mouth off about money except Ortiz, but that’s such a common occurrence, it’s easily shrugged off (plus, as we all know, he’s recently been paid again, hometown discount or not, so he’s back to being happy, smiling Papi). Everyone in the organization appears to be focused, ready, and super pumped to try to recreate the magic of 2013.

END_OF_DOCUMENT_TOKEN_TO_BE_REPLACED

Eric Wilbur had quite the story to tell. END_OF_DOCUMENT_TOKEN_TO_BE_REPLACED

Winding down 2017 in sports. END_OF_DOCUMENT_TOKEN_TO_BE_REPLACED

Chad Finn has some thoughts. END_OF_DOCUMENT_TOKEN_TO_BE_REPLACED

The saddest onside kick ever? END_OF_DOCUMENT_TOKEN_TO_BE_REPLACED

Feel the heat yet? Neither do we. END_OF_DOCUMENT_TOKEN_TO_BE_REPLACED

The Red Sox legend is dead at 99. END_OF_DOCUMENT_TOKEN_TO_BE_REPLACED