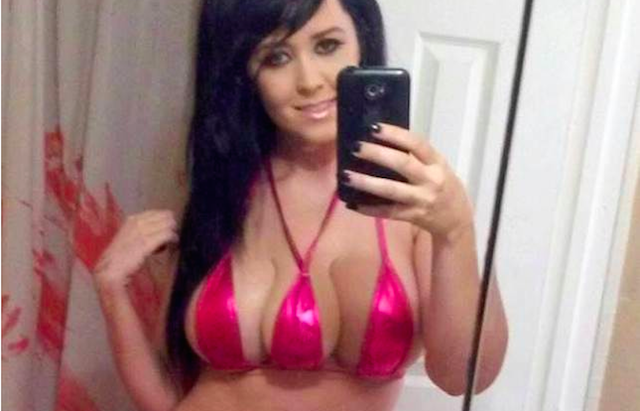 Fame has been given a new price tag, as Florida woman Jasmine Tridevil has gone full “Total Recall,” getting a third breast implanted on her chest in hopes of scoring a reality TV show.

Tridevil claims that she got the surgery to become more unattractive to men, stating that she has no desire to date anymore. Suffice it to say that, knowing men, this will probably not be the outcome for the newly tripleted massage therapist who is hoping for attention of another kind.

“I am crazy,” she told Orlando’s Real Radio 104.1 , “crazy people don’t know they’re crazy. But technically, since I know I’m crazy, I’m not crazy.” Crazy like a fox. Tridevil dreams of having an MTV reality show – one presumably based on her life as a woman freshly re-imagined with a breast trifecta – and there’s no real doubt in anyone’s mind that we’ll probably see her on, at the very least, TLC before all is said and done.

The third breast is made from silicon and her stomach tissue, and a prosthetic was inserted to give the appearance of a nipple. However, the surgeon was unable to manufacture an areola, so Tridevil had one tattooed on instead. The whole procedure cost Tridevil $20,000, but who knows what riches the life of a short-run reality TV star will hold.

Tridevil’s parents have been theatrically disapproving. “My mom ran out the door. She won’t talk to me. She won’t let my sister talk to me,” she said in the interview. Though her father still supports her, she noted that he’s “kind of ashamed.” All the better for the pilot. Both family-shattering interactions were caught on film and will be teased before commercial breaks soon on your cable box.

Tridevil claims to have contacted 50 to 60 doctors before finding one that would oblige, though she had to sign a nondisclosure agreement with the operating surgeon. “It was really hard finding someone that would do it too because they’re breaking the code of ethics,” she said. There has been no report on whether the surgeon will be seeking a spin-off, but c’mon.

This should never have happened. END_OF_DOCUMENT_TOKEN_TO_BE_REPLACED

I spend far too much time on Twitter. Here’s a handful of posts from last year that I found to be entertaining on one level or another. Enjoy. END_OF_DOCUMENT_TOKEN_TO_BE_REPLACED

Apologies in advance for burying this in your skull forever. END_OF_DOCUMENT_TOKEN_TO_BE_REPLACED

If you like cover songs, you’re gonna love this. And by love, we mean probably hate. END_OF_DOCUMENT_TOKEN_TO_BE_REPLACED

Whether you celebrate the unofficial beginning of summer on Memorial Day weekend, or Meteorological Summer on June 1, or the Summer Solstice, make no mistake: summer is here. END_OF_DOCUMENT_TOKEN_TO_BE_REPLACED

The nu-metal mainstays have covered the unlikeliest of songs. END_OF_DOCUMENT_TOKEN_TO_BE_REPLACED

Ladies and gentlemen, from the far-reaches of the internet, I present to you…La Boing Boing Rock Band. END_OF_DOCUMENT_TOKEN_TO_BE_REPLACED