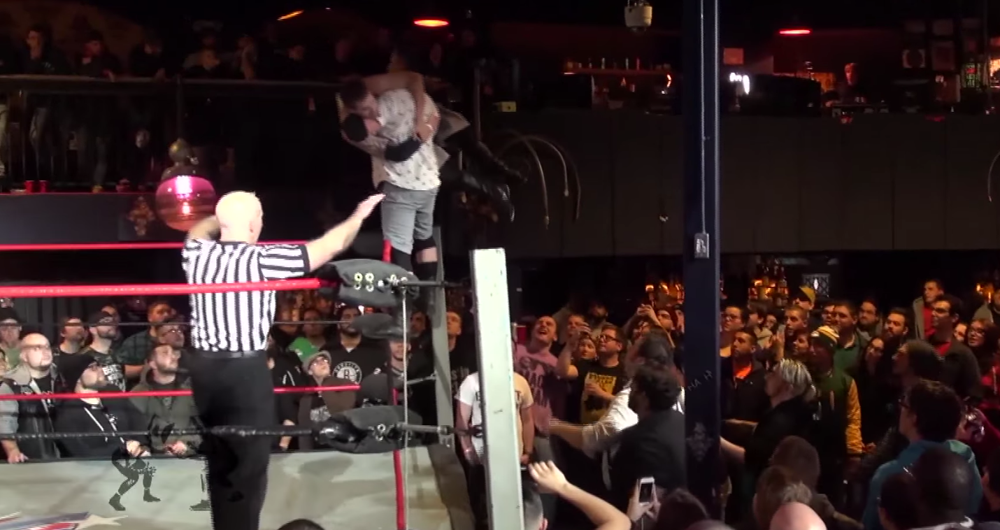 Pro wrestling and rock ‘n’ roll have more in common than the snootier denizens of both mediums would care to admit, I’d wager. Both exist on the backs of a small army of larger-than-life personalities who are all, out of necessity, on tour forever. In the Reagan-era, the individual daily cocaine regimens of both WWF champions and hair metal headliners could kill a full-grown walrus. And viewed from the right angle, their hierarchies look kind of the same.

Let’s say watching Monday Night Raw is equivalent to streaming a Green Day album. WWE and Green Day both aim to attract the largest audience possible, neither of their products are difficult to find, both have truckloads of money. That makes backyard wrestling akin to D.I.Y. basement shows, where performers compensate for their lack of skill and financial resources with indifference to their own physical well-being. And a proper indie wrestling showcase is like a better-than-average bill at T.T. The Bear’s or Great Scott – in other words, the middle tier tends to provide the best bang-for-buck ratio.

In the interest of altering fans disenchanted with WWE’s product to said middle tier’s existence, the Providence-based Beyond Wrestling organization is curating #RAWlternative, streaming for free on YouTube alongside tonight’s Raw. A collection of indie matches from promotions across the U.S. and Canada, #RAWlternative is slated to include The Young Bucks, innovators of the moonsault selfie, combating Player Uno and Player Dos of the Super Smash Brothers, courtesy of Toronto’s Smash Wrestling. New York’s Squared Circle Wrestling presents noted CM Punk associate Chris Hero against ex-Tommy Dreamer tag partner Colin Delaney. There’s a heap more where that came from, but we’re most excited to see Inter Species Wrestling’s contribution, wherein Ninjas With Altitude battle a masked Italian chef and a human-sized lobster collectively known as The Food Fighters.

The full lineup for #RAWlternative:

#RAWlternative starts at 7:30 p.m. and can be streamed for free here.

The Black and Gold continue their run tonight at TD Garden. END_OF_DOCUMENT_TOKEN_TO_BE_REPLACED

Who will make the Class of 2018? END_OF_DOCUMENT_TOKEN_TO_BE_REPLACED

It’s been awhile since we talked Black and Gold. END_OF_DOCUMENT_TOKEN_TO_BE_REPLACED

You’re going to wish you were in the Northern Alps. END_OF_DOCUMENT_TOKEN_TO_BE_REPLACED

END_OF_DOCUMENT_TOKEN_TO_BE_REPLACED

Bill might be “on to Tennessee,” but we’re not. END_OF_DOCUMENT_TOKEN_TO_BE_REPLACED