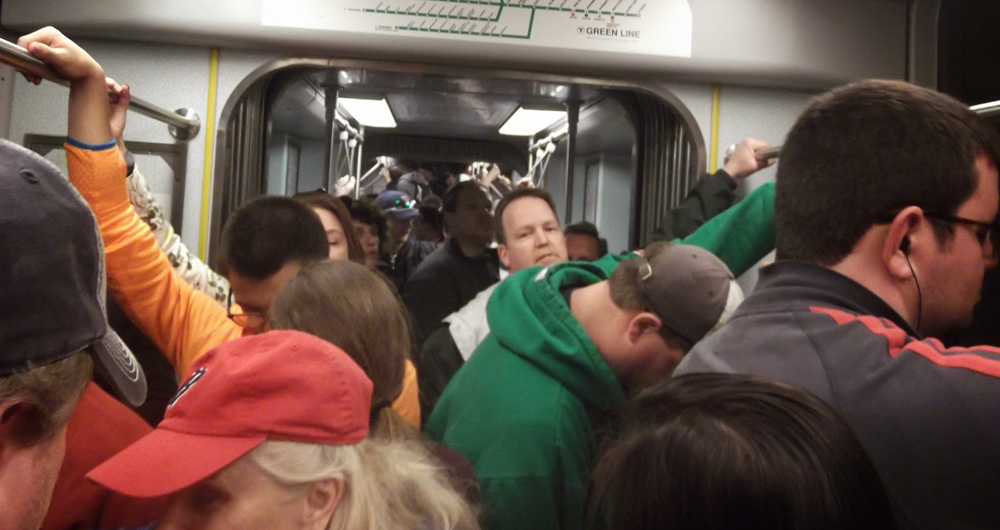 The Ottowa gunman, Mayor Menino’s battle with cancer, and the death toll in Syria are all important news from this week that you should read up on and discuss over the first beer of the evening—but man, they do not make for great bar jokes. As the night wares on, the banter gets lighter, and you want to make jokes while seeming to know something about the world around you, stick with the classics: bros rioting, angry sculptors, and the ever-comical Green Line.

Boston is finally getting the long-awaited Lynch Family Skate Park. Tell your drinking buddies this weekend that the park is the result of a truce between the octogenarian sculptor behind the Tortoise and the Hare statues and skateboarders in Copley Square. When your friends call you a liar, show them this and make them buy you a drink.

Hey! It’s the 25th anniversary of the Charles Stuart case (“the what?” ask most of our young readership), which is singly responsible for Boston’s image as a racist city. Well, that and the bussing riots in the 70s. And the fact that the Sox were the last MLB team to integrate. And that time a black Harvard professor was arrested for entering his own house. And, you know, that Herald cartoon last week

The New England Aquarium shut down for a day after employees heard a loud pop that caused the whole building to lose power. Apparently the cause was a burst steam pipe, and not, in fact, a whale fart.

The town of Keene is still recovering after a band of young rioters flipped a car, smashed windows, and tore down lampposts, then clashed with police. What fueled the chaos? An officer shooting an unarmed black kid? A protest for a more democratic government? No! Pumpkin Fest. They were drunk on the power of pumpkins (and probably beer).

New England states will bag up a cool $3 billion from an influx of tourists (suckers, if you will) flying against the bird migration pattern to look at our colorful leaves. If you meet some folks who are visiting from out of town this week, tell them about how looking at leaves is fun, but raking them is an orgasmic experience. Then, offer to  let them clean your lawn—for free!

The MBTA has rolled out “phase one” of its real-time Green Line train tracking app, which comes after five years of waiting (which somehow seems appropriate for the Green Line). So now you’ll know you have to wait 45 minutes for the pleasure of inhaling the Bud Light fumes coming off the 22 Northeastern students who at least will cushion your fall as the train screeches along a bend. Your topical commuter pickup line for the Night Owl service: “Are you happy to see me, or are you rubbing against me because personal space is not an option?”

Enter to win a pair of tickets to attend The Hess Collection Seminar and Dinner as part of Boston Wine Festival 2018 at the Boston Harbor Hotel on Wednesday, March 14th. END_OF_DOCUMENT_TOKEN_TO_BE_REPLACED

Boston band Funeral Advantage is Tyler Kershaw. And Tyler Kershaw had a fun childhood, so it seems. END_OF_DOCUMENT_TOKEN_TO_BE_REPLACED

Perry put me on to daephne and the album blew my mind. END_OF_DOCUMENT_TOKEN_TO_BE_REPLACED

While many have called out Davis since a video of her refusing to issue a marriage license to Rowan County residents David Moore and David Ermold went viral in July, relationship columnist and gay activist Dan Savage went a step further on MSNBC Tuesday night, saying that “this is about someone hypocritcally looking to cash in”. He added: “And she is a hypocrite.” END_OF_DOCUMENT_TOKEN_TO_BE_REPLACED